Wolfsburg's men's football team may only be second best in the Bundesliga, but the women's team sets the standard in Germany. On Saturday, the Wolves beat Turbine Potsdam 3-0 to take the German Cup. 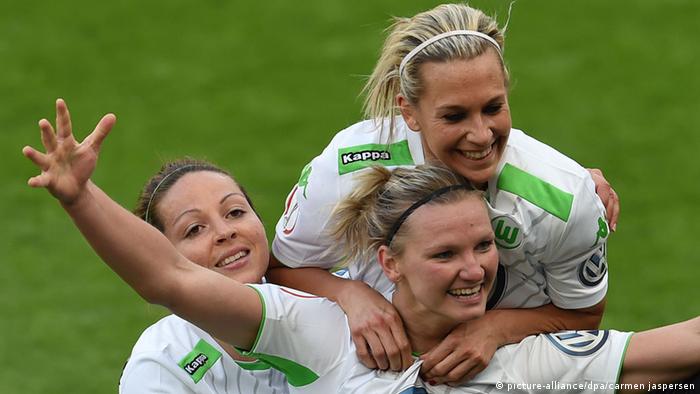 Right from the start, Wolfsburg jumped all over their opponents in the final in Cologne. In minute 12, a long ball from Nilla Fischer evaded the entire Potsdam defense to find 35-year-old veteran Martina Müller. She was as cool as her namesake Thomas, netting to put the Wolves on the road to victory. In fact, you could say that Potsdam got müllered.

Wolfsburg continued to dominate for most of the first half, while Turbine finally got into the game in the final ten minutes before the halftime whistle. Still neither side could score, so the Wolves took their slim advantage into the dressing room.

Müller almost doubled Wolfsburg's advantage immediately after the restart but keeper Anna-Felicitas Sarholz was on hand to keep the ball out. There was nothing Sarholz could on the hour mark, though, as Nina Pedersen fouled Alexandra Popp in the area.

Müller stepped up to the spot and her penalty was too well-placed for Sarholz. The Wolves were up 2-0, and with Turbine failing to generate much in the way of chances, the match was essentially decided.

Müller, who's retiring, turned provider in minute 70, slipping the ball to Popp who completed the scoreline.

"It's great that she got two goals on a stage like this," Wolfsburg coach Ralf Kellermann said. "It's wonderful when you can end a career like that.

The Cup was the second in the club's history and will compensate somewhat for Wolfsburg's unlucky departure from the Champions League at the hands of Paris Saint-Germain last week.

World Cup-winning women's football coach Silvia Neid will make way for Steffi Jones as new coach of the German national team. The change isn't set to happen until next year though. (30.03.2015)

Germany finished strongly at the women's soccer tournament in Portugal after beating Sweden 2-1 in the 3rd/4th place playoff on Wednesday. The USA boosted their World Cup credentials by overpowering France in the final. (12.03.2015)