There was no repeat of Tuesday's madness in the second semi-final of the German Cup. Instead, Wolfsburg dispatched upstarts Bielefeld with ease 4-0 and will now face Dortmund for the big prize. 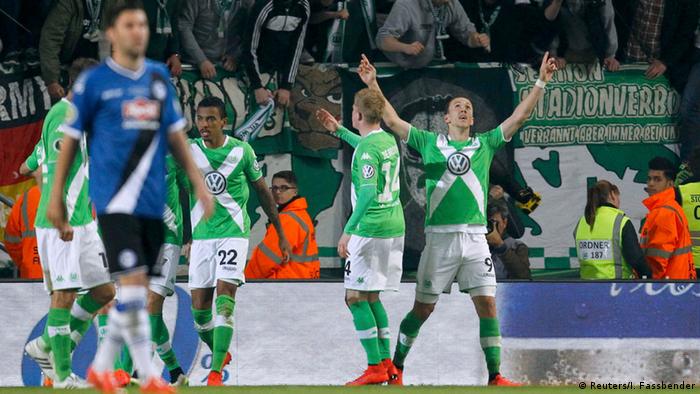 Third-division Arminia Bielefeld came into the semifinal as giant killers, having kicked top-flight Hertha Berlin, Werder Bremen and Borussia Mönchengladbach out of the tournament. In front of a frenetic home crowd they were looking to stick it to Germany's second-best team Wolfsburg as well.

The Wolves were having none of it. The VW-sponsored team were all over their outmatched opponents right from the get-go. Only eight minutes had elapsed when an errant Arminia pass in their own half lead to a Wolfsburg lead. Daniel Caligiuri laid on a perfectly weighted-pass for Maxi Arnold to curl into the top of the net.

25 minutes later and the Wolves doubled their advantage on a set piece. Ricardo Rodriguez lobbed a free kick onto the noggin of Bas Dost, who picked out Luiz Gustavo. The midfielder headed home from close range.

After the break, Bielefeld had brief hope for a lifeline as a Florian Dick cross mutated into a shot. But the ball rebounded off the post.

And in minute 51, man-of-the-match Caligiuri slipped the ball to Ivan Perisic, who slid it home from close range. Bielefeld were clearly shocked, and Arnold bagged a brace and completed the scoreline four minutes later. The youngster went rampant in Arminia's area and smashed in own his own rebound.

After that the Wolves and referee Tobias Welz, who ignored at least one stone-cold penalty, took pity on their spirited hosts. Bielefeld's Cinderella run comes to an end, while Wolfsburg have a date with Dortmund in the German Cup final in Berlin on May 30.

Bayern Munich's Arjen Robben out for the rest of the season

Bayern Munich's injury woes continue as Arjen Robben is out for the rest of the season after limping off in the German Cup semifinal loss to Borussia Dortmund. Bayen's top goalscorer Robert Lewandowski was also injured. (29.04.2015)

In a game that sparked into life late on, Borussia Dortmund beat Bayern Munich 2-0 on penalties after the game finished 1-1. Incredibly, all of Bayern's four takers missed from the spot. (28.04.2015)