With Cinema Jenin, a dream is fulfilled for Palestinian Youth | Environment | All topics from climate change to conservation | DW | 02.06.2010

With Cinema Jenin, a dream is fulfilled for Palestinian Youth

German filmmaker Marcus Vetter is close to completing the restoration of a cinema in Jenin, a town in the Palestinian West Bank. The cinema was shut down by Palestinian militants more than two decades ago. 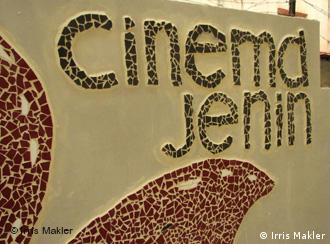 The restoration was driven by the parents of Ahmed Khatib

Marcus Vetter made a film in Jenin three years ago - and stayed on to build a cinema in which to show it.

His documentary film, "The Heart of Jenin," is about Ahmed Khatib, a Palestinian boy killed by Israeli troops while playing with a toy gun in the town's refugee camp. His parents decided to donate their son's organs to save the lives of other children - Arab and Israeli.

The documentary won several awards, but it couldn't be shown in Jenin, where it all happened. The town's only movie theater was shut down by Palestinian militants more than two decades ago. Ahmed's parents asked Vetter to help renovate and reopen it, because they wanted to create more opportunities for local children. He agreed, although he'd never funded or managed a building project before. 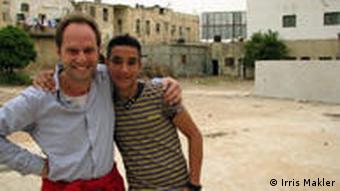 "You can't open such a place just by helping. It's impossible as I realized very fast. This is real work. What I could have helped with was fundraising, but raising money is nothing - raising money just means corruption," said Vetter.

Vetter has run things in an unorthodox way. He didn't apply for funding before starting. He just began, with no salaries at all to pay the German architects and engineers. They're volunteers.

"Just take a step, that's what we did here, just renovate, don't talk all the time, and do it with all your passion," said Vetter.

The project is ambitious. Vetter and his team are renovating the old indoor cinema, building an outdoor one, adding a cafe and guest house, as well as setting up a film production and distribution company.

So far, the project has cost more than half a million euros. Most of the money has come from the German government, with the rest from corporate donors and ordinary people.

Along the way, money has always been tight. Earlier this year, Vetter simply ran out of cash. He wrote to six donors saying he needed 90,000 euros ($108,000) to finish the job. Only one of them replied - legendary British musician Roger Waters, of Pink Floyd fame.

"Having met all the people involved I felt connected to them and I felt it was the least I could do to give them the money to finish the project,"said Waters, talking by phone from the United States.

Waters says he was inspired to help by the generosity of Ahmed Khatib's father.

"This project was fundamentally and always attached to that story, that incredibly moving story. He gives the rest of us hope that we may at some point find a partial solution to the plight the Palestinian people find themselves in," said Waters. 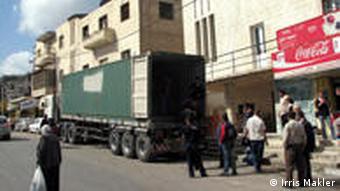 A truck delivers all the technical equipment to the cinema

Dialogue with other cultures

Fakhri Hamad, the project manager for Cinema Jenin, says the project is changing the town.

"We started with a small idea to have a place for kids to play and learn but it's had local and international support, and it's grown and grown. Now it's become a project of the town itself. Jenin has the chance to prove it's ready to accept other cultures, to accept peace and to accept dialogue," said Hamad.

It's been a huge turnaround for Jenin, a town with a population of around 250,000 which became known as the source of a third of the suicide bombers of the Palestinian uprising known as the Second Intifada. Now, young Palestinians are learning about filmmaking side by side with German students, as well as working on the building site together.

But there has been some Palestinian opposition to the project. Earlier this year, Palestinian intellectuals criticized Cinema Jenin, arguing that it "normalized" relations between Palestinians and Israel. They said the project relied on cooperation with Israel and that they opposed building a cinema while Israel's occupation army remained in the West Bank. Vetter admits that he was discouraged.

"I did think then that the project might fail. I thought that I can't keep giving my time to a project which has a fundamentalist approach. It was very depressing," said Vetter 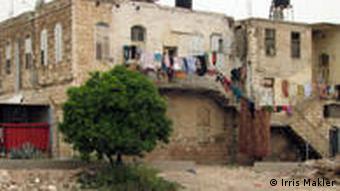 There's still a long way to go on the building site

But the faith of ordinary people in the project restored Vetter's commitment, as did the unswerving determination of Ahmed Khatib's parents. For them, Cinema Jenin is the fulfilment of a dream. They want the town's young people to have more of everything than their son had - more opportunities, more of a future, and of course more security. When he died, Ahmed saved the lives of the five children who received his organs. With this movie theater, established in his memory, they hope he will touch the lives of countless more.

Opening in time for World Cup

Cinema Jenin is now almost complete. The members of the project team hope to open the outdoor cinema in time for the World Cup later this month. The official opening of the restored indoor cinema is scheduled for August.

Israel has announced a plan to release all of the activists detained after Monday morning's raid on a Gaza-bound aid convoy. Among those already released are five German citizens, including two members of parliament. (01.06.2010)

Germany and the Palestinian National Authority tread new ground in Berlin on Tuesday, kicking off the landmark German-Palestinian Steering Committee. (18.05.2010)