Israel has announced a plan to release all of the activists detained after Monday morning's raid on a Gaza-bound aid convoy. Among those already released are five German citizens, including two members of parliament. Israel has agreed to release all the activists

Two days after Israeli forces overtook a convoy of aid ships headed for the Gaza strip and killed at least nine passengers, most of the detained members of the flotilla are being sent home.

The Israeli government decided late Tuesday night that it would send all the remaining detainees, aroung 600 people, back to their home countries within the next 48 hours. 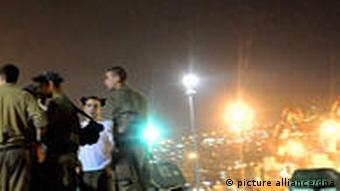 Israeli soldiers had been waiting for the flotilla's arrival

Before dawn on Wednesday, a group of 124 activists was sent over the land border to Jordan. They are originally from twelve different Muslim countries with no diplomatic ties to Israel. Another group of Turkish citizens was taken to Ben Gurion Airport near Tel Aviv to be flown back to Turkey.

The activists on board the ships claimed to be part of a humanitarian mission to Gaza and were being held in Israel for questioning about the incident.

Eleven people in the convoy were German citizens, and five have since been returned to Germany.

Norman Paech, who represented Hamburg in parliament with the Left Party from 2005 to 2009, stood visibly shaken in the German Bundestag in Berlin and recalled his experience on the ship. Five Germans have been released, six are still unaccounted for

"This has been a clear act of piracy," he angrily told reporters. "I'm anxious to hear what the German government and parliament have to say about this act of piracy, which if it had occurred near Somalia would be treated as such."

Also on board were Matthias Jochheim, a German representative of International Physicians for the Prevention of Nuclear War; Inge Hoeger and Annette Groth, current Left Party members of parliament; and Nadel El Sakka, a representative of the Palestinian community in Germany.

Israel says it has processed some 700 activists of at least 38 different nationalities, many of them Turks but also Israelis, Palestinians and more than a hundred Europeans. The German foreign ministry has confirmed a total of 11 Germans were aboard the flotilla, but could not comment on the whereabouts of the other six.

Israel has said its soldiers were attacked with knives, metal rods and gunfire by passengers aboard the ship. It has fiercely defended its decision to raid the ships, which resulted in at least 9 deaths.

Paech countered their claims and said he saw only two wooden batons on the ship that may have been used against the Israeli soldiers.

"I can't say for sure because I wasn't on above on the deck," he said. "But during the preparation I never saw any metal rods or axes. That was absolutely clear." Hoeger said they were shut inside the ship

Hoeger, one of the two current members of parliament, said the women on the ship were quickly shut in a lower level of the ship, the so-called "women's deck," during the night.

"We couldn't get out, we didn't know what was going on above because we were locked in," she said. "We put on our life vests and eventually we figured out that the ship was occupied, that the Israelis had taken it over."

Hoeger and her colleague Groth said they did not know who had shut them in - the organizers of the flotilla or the Israelis. After they were let out they were searched, handcuffed and brought to the port in the Israeli city of Ashdod. There they were allowed to contact the German embassy, she said.

The Security Council's statement asks for an impartial investigation into an Israeli raid on a flotilla of aid ships that resulted in at least nine deaths. Meanwhile, over 400 passengers are being detained in Israel. (01.06.2010)