Wingsuit divers hurl themselves from cliffs or helicopters, plunge two or more kilometers deep and pull a parachute just before they hit the ground. German wingsuit flyer Alexander Polli explains to DW why he does this. 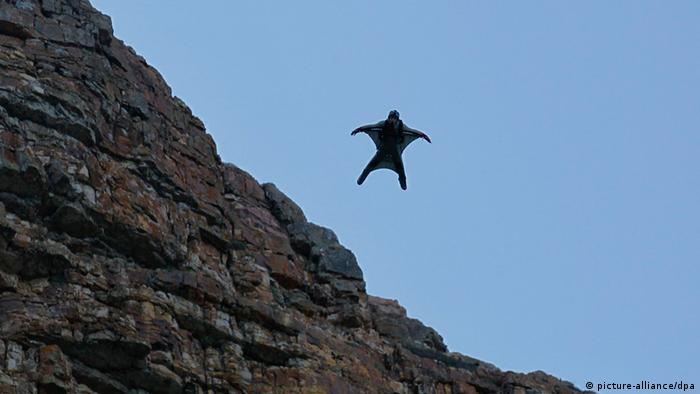 South African basejumper Leander Lacey in action off the clips of Chapman's Peak in South Africa.

The dream of flying like a bird is as old as humanity itself. Wingsuit flyers, or skydivers, come pretty close to the real thing. They jump from high altitudes wearing a special aerodynamic jumpsuit, which adds surface area to their body through fabric between their legs and under their arms, giving them an increase in lift. It allows them to soar for long distances before they open a parachute. But even the smallest mistake can de deadly. Twenty wingsuit flyers died this year alone.

DW: Alexander Polli, many people say what you do is absolutely crazy. You are risking your life. For what?

Alexander Polli: I don't see it that way, that I simply risk my life. I prepare extremely well. Before my first base-jump I'd already completed 1500 freefall skydives over two years. That meant that I had reached a level where it was beyond doubt that I could manage to fly after jumping from a cliff. I know I can. I never went out there to risk my life.

To be quite honest: I am extremely scared of dying - and I am scared of heights. I never would have embarked on this kind of sport if I had had to be the first to do it. But in fact there were other parachutists, skydivers and base jumpers who'd been doing this for twenty years. So I just asked myself why can they do that and I can't? Is there something I really can't do or is it simply fear that is stopping me?

But you keep on jumping. What do you get out of it?

Just yesterday I dived from Monte Brento [a mountain near Lake Garda in northern Italy], together with a man and his son. The father was 61 years old. At 26, the son was about my age, and we all jumped together! 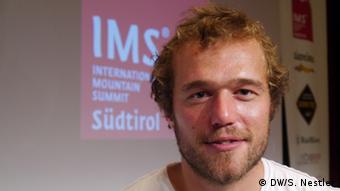 But even today I stand up there in my wingsuit and ask myself: What are you doing here? Am I mad or what? But then it dawns on me what I'm about to do and I realize that I can simply enjoy it, because I have been through all that training. And then I think to myself, 'Good Lord, I am really going to fly down this mountain!?' And after landing, when I look back up or when I watch a video of my flight on a big screen, I think 'Wow! Is that really me?' I mean - this is a dream come true.

Is your goal to fly closer and closer to the face of the rock?

No, not at all. It is good to fly close to the cliff, because that's how you can gauge how fast you are. But my goal is not to break records, but rather to perform a task. I meet friends and we climb these mountains and onto these big cliffs no one else has jumped off before - or at least I haven't done so myself.

I'm not really a mountaineer. Mountain climbing is quite daunting to me. It worries me much more than the actual dive. When I finally stand there with my parachute facing down just before I jump, that is when I feel safe again. It is the climb to get there that I see as dangerous and scary.

But there's been a lot of discussion lately, because several wingdivers lost their lives. What do you say to critics? 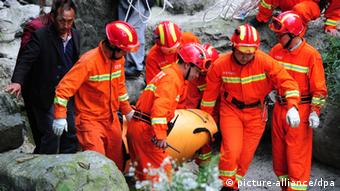 Hungarian wingsuit flier Viktor Kovats' body was found by rescuers after he died in during a jump at Tianmen Mountain in central China in October 2013.

My answer is: It is a relatively new sport. There is a lot we don't know yet about how wingsuits work. When one guy with a fair bit of experience tries to teach a newcomer how to fly, it's rather like saying 'Stick your finger in the air and check where the wind is coming from and then let's see how it works.' There is no scientific data yet. These wingsuits were developed only eight years ago.

I really feel honored that I had the opportunity to meet some of the people who have since passed away. I believe some of them just had bad luck. Those wingsuit flyers were not all paragliders. We don't all really understand the principals of thermal lift and such things. But I have come to realize that these thermic conditions are vital: When warm winds fall off the face of the rock you've got good flying conditions, but you should perhaps not jump when the cliff is in the shade. But there are probably divers who don't think about that. I think it's because our sport is so new that our knowledge is still so limited.

Your videos are spectacular. Millions of people watch them. Doesn't that give you a sense of responsibility towards them? Maybe there are young people who say, 'Wow, I want to do that too!', although they really lack the skills.

Yes, maybe indirectly. I'd rather say no, because in this context responsibility really is a heavy burden, which I don't really want to lump myself with. But maybe I have indeed inspired the odd person who would not have ever considered diving in a wingsuit if he hadn't watched my video.

That's why I won't post any videos of me jumping this year. Instead, I will post a video where I speak about mental aspects and rules about wingsuit flying. Telling them to repeat them to themselves: 'Okay when I fly in a wingsuit, I will never do this or that.' If you internalize these rules then there is no reason you can't safely fly over and over again.

Do you think that will work better than laws and restrictions?

Of course! It is not really possible to regulate this efficiently. We can't set up safety check points on every mountain to decide, 'You can jump… but you can't!' [laughs]

So flying is your passion - do you think it will cool down at some point?

To be honest I've already been passionate about a lot of adventurous things. I have jumped and dived so many times, that I would quite like to focus more on mountain climbing now. Mountaineering is fascinating - I find those people really amazing and inspiring, what they do is really crazy. I'd really like to develop that skill - or surfing or white-water rafting or trekking large distances. There are many other adventures I could become passionate about.

Alexander Polli was born in Norway and lives predominantly in Italy. At the age of 28, he is one of the most experienced BASE jumpers in the world. This year, he made the headlines with a flight through a narrow cave on a rugged mountainside in Spain.