Why helping others is good for you

People who volunteer report higher levels of well-being, greater life satisfaction and less depression. But your motivation can impact how happy helping makes you feel. Andriana, who goes by one name, volunteers three days a week with the Indonesian charity Komunitas Taufan, a community of volunteers that supports families of children with cancer and other high-risk illnesses.

The charity tries to brighten the days of hospitalized children with laughter, games and music and supports their parents as they watch their kids battle for their lives.

"Sometimes the mother is actually the one who needs the strength and motivation because it's easy to cheer up the kids, but the parents … need someone to talk to," Andriana told DW.

After spending time with the patients and their parents, she leaves with a bigger heart and her own life problems are put into perspective.

Research has found there is a strong link between volunteering and greater life satisfaction, positive emotions, and reduced depression, according to the 2019 World Happiness Report.

In a review of 37 studies with samples ranging from 15 people to more than 2,000, adult volunteers scored significantly higher on quality of life measures compared to non-volunteers.

People are more likely to get joy from helping others if they are free to choose if and when they want to help, they feel connected to the people they're helping, and they can see how they are making a difference, the report stated.

Keep up the good work

Researchers at Flinders University in Australia found that people who volunteered reported higher levels of well-being, but the positive effects are short-lived if people do not continue to volunteer.

In Mazabuka, a town in southern Zambia, Diana Limande has been volunteering in her community for 14 years. She helps with Catholic Relief Services' FASTER project, which focuses on viral suppression in children and adolescents living with HIV.

"Some even hide it from their own parents, they don't even tell their husbands," Limande told DW.

If you or people close to you have been affected by an issue, that personal connection can be a strong motivating factor for volunteering.

"I've lived a positive life for 14 years now, and I know the way it feels to be a positive parent or mother," said Limande, who is also a cervical cancer survivor. Part of her volunteer work involves encouraging HIV-positive women to be screened.

"I really want to help my fellow positive-living people on how to go about it," Limande said. "Maybe they will come out, stop discriminating [against] themselves."

Our motives can affect how happy we feel after we do something to benefit others, whether that’s helping, sharing, donating, cooperating or volunteering.

In early 2018, Piyush Sardana founded Rise Foundation, a volunteer-run organization that supports homeless people in Berlin by providing them with food, hygiene products, clothing and practical information like how to get medical help or where they can shower.

Twice a month Sardana and about 20 volunteers put together packages and distribute them to people in need. 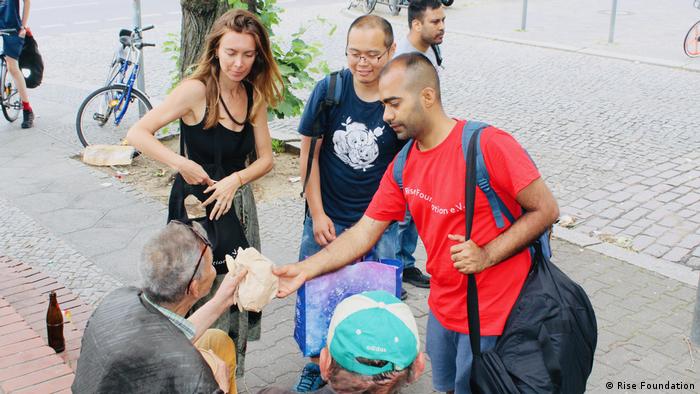 Sardana, who works as a software developer, said he volunteered for more than 10 years in India before moving to Berlin.

Although he runs Rise Foundation, the satisfaction Sardana gets from volunteering comes from helping people face-to-face.

"Spending five minutes with someone who is probably ignored hundreds of times during the day — how that changes the person's day and how the smallest thing would make their day is definitely satisfying," said Sardana.

Even without doing the act of kindness yourself, a study in 2013 suggested that knowing the direct impact your donation has on people affects the emotional benefit you feel afterward.

People who donated money to UNICEF, a major aid organization, did not experience any emotional benefits. Still, people who donated to Spread the Net, a UNICEF-affiliated charity that buys bed nets to stop the spread of malaria, reported being happier.

It suggests that seeing the impact of your act of kindness, whether volunteering or donating to a cause, leads to higher levels of well-being and happiness.

As European countries go into a COVID-19-induced lockdown again amid a cold, dark winter, people will be spending even more time indoors. Small changes in your home can make you mentally healthier.

Holidays off the beaten path: What's really behind voluntourism?

Voluntourism is one of the fastest growing trends in travel. But can volunteering in faraway countries save the world ? Or are such epic journeys actually more about finding — and saving — yourself?