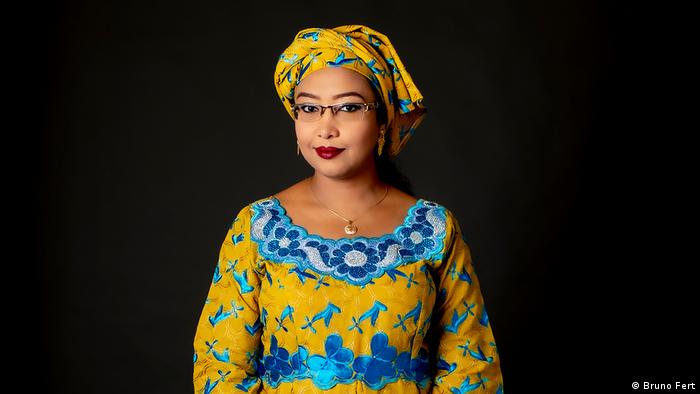 "At the end of patience is heaven. That's why death is there," says Cameroonian novelist and feminist activist Djaili Amadou Amal

Her own forbearance, or "Munyal" in her native language Fulfulde, almost drove her to suicide.

The word "patience" does not even remotely encompass what it is associated with in Amal's culture: Self-control to the point of self-sacrifice.

Women are expected to be submissive

"It also means you should submit without complaint," Amal told DW, in a discussion around her third novel, "Les impatientes," which has now been published in German. The English-language version of the book, titled "The Impatient," will follow in October.

"According to this principle, which applies throughout the Sahel, a woman should exist only to make those around her happy, to sacrifice herself so that everyone is well. But the problem is that no one has ever asked how she is doing with that."

And if possible, she shouldn't ask about it herself.

But that's exactly what Amal's characters in the novel do: the girl Hindou, who has to marry her violent cousin; her sister Ramla, who is married off against her will to a much older man; and that man's first wife Safira, who suddenly has to contend with a second wife who is the same age as her own daughter.

Three insider perspectives of a system in which rules break people — and not the other way around. The fact that all three speak out as first-person narrators comes close to a revolt in this environment, where silence is golden and speaking about one's own pain is taboo.

Djaili Amadou Amal has experienced the power of this system herself. Born in Maroua, in northern Cameroon, some 1,300 kilometers from the capital Yaounde, she was only 17 when she was forced to marry a 55-year-old politician.

What did she feel then? Injustice, she says first: "In these forced marriages, physical violence is not used like in bad TV movies. It always goes with emotional blackmail. Your whole environment, the whole family convinces you that you have to accept this, for your own good, but also for their good." This social pressure makes female solidarity impossible and drives mothers to force their daughters into disastrous marriages.

Like Amal, all her female friends felt the same way. "The only difference was, I had read books." Her marriage saw the onset of depression, bulimia, anorexia, as well as her attempts to escape and to take her own life.

"I was completely lost. The only time I was okay was when I opened a book. I developed a passion for everything that was far away. Novels about the Middle Ages, Turkey, India, China. There I could be a heroine from any era."

Saved by a pen

One day, years later, she picked up a notebook. She had always been drawing and writing poetry. "But that day there was a pen, I took it and started writing. After a while, a certain calm came over me, I felt better. Maybe that was a survival instinct." It took her a while to realize what she was writing.

"I wrote myself. I let out everything that was inside me. I was screaming out how unhappy I was." German book cover of 'The Impatient'

She didn't realize then that she was in the process of writing her first book. But it gave her the strength to break free from the marriage.

Ten years later, she would find the strength to leave a second marriage to an abusive man. "I often say that literature saved me," she says.

Meanwhile, literature cast her into the international spotlight, especially through her third novel. Published in Cameroon in 2017, it caught the attention of a Parisian publisher. Together they released a revised version that was shortlisted for France's most prestigious literary prize, the Prix Goncourt, in 2020 — a first for an African female author.

The fact that she ended up winning the Prix Goncourt des Lyceens, awarded by a youth jury, was far more than a consolation. It saw her book being made compulsory reading in Cameroonian schools and opening the eyes of the younger generation.

The rights of daughters

In addition to her work as an author, Djaili Amadou Amal is involved in the feminist organization "Femmes du Sahel," which provides girls with a school education and access to books that was so crucial to her own life.

At the same time, Amal's great concern is for women's rights worldwide. "I do talk about the Sahel," she says, "but that doesn't change the fact that European, Indian, American women also experience all these kinds of violence."

She cites for instance the consequences of the COVID lockdowns around the world: increasing violence and more women murdered.

"We're falling years behind at every little opportunity. I tell girls all over the world: your mothers and grandmothers had to fight for what seems to be given to you. If you are not careful, your daughters will no longer have your rights."

Surge in domestic violence during pandemic