Why Brutalism is sending out an SOS

Visionary, or monstrous architecture? Brutalist buildings are either loved or hated. Considered eyesores for decades, they're hip again — but many are still endangered. Germany is calling #SOSBrutalism.

"There's never been an architectural style with a more unfortunate name than Brutalism," says Catherine Croft, director of the Twentieth Century Society (C20), which aims to protect and promote Brutalist architecture in the UK.

"Now people have realized that it doesn't mean that it's architecture that is brutal," she says. Rather, many now see the style as honest, sculptural and imaginative.

But just as many still truly hate the style: Prince Charles himself is a heavyweight critic of those "concrete monstrosities." 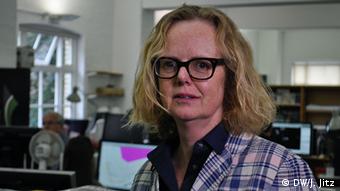 "The popularity of Brutalism is really rocketing": Croft

The internet keeps stirring up debate when it comes to Brutalism. All over social media, fans post black-and-white photographs taken from unusual perspectives, emphasizing the dramatic effect of these layered buildings. On Facebook, the "Brutalism Appreciation Society" has attracted nearly 40,000 members.

Aficionados of the architectural style can even add a touch of Brutalism to their living room, or wear it, with pillowcases and T-shirts showcasing these buildings also for sale online.

Surfing on this social media hype, the German Architecture Museum (DAM) and the Wüstenrot Foundation have started using the hashtag #SOSBrutalism to make these buildings visible worldwide in order to contribute to saving those that are currently threatened.

"Brutalism represents an anti-attitude, an anti-idyll," says campaign co-initiator Philip Kurz, of the Wüstenrot Foundation. Some 900 buildings - from London to Abidjan, from Tokyo to Caracas - are already documented on the website sosbrutalism.org. Among the structures featured in the database, some have already been demolished while others are currently endangered.

Now, the German Architecture Museum is opening an exhibition on November 9 based on the online campaign. The show called "SOS Brutalism — Save the Concrete Monsters" gives an overview of the architectural style thanks to photos from Japan, Brazil, the former Yugoslavia, the USA, Israel, Great Britain and West Germany, where many buildings, including churches, were built between 1950 and 1980.

Jana Revedin is demanding a paradigm shift in architecture. The architect and professor asks her colleagues to construct answers to the big questions in architecture of our time. (27.05.2016)

As one of the most significant architects of the 20th century, the Brazilian Oscar Niemeyer was involved in several hundred projects. He passed away in Rio de Janeiro at the age of 104. (06.12.2012)

The energy-guzzling UN offices in New York are getting a facelift with sealed windows and improved insulation to cut energy waste. The project’s lead architect Michael Adlerstein talks about the complex renovations. (26.06.2012)

The architectural movement was popular from the mid-1950s to the 1970s. After that, the gray giants featuring raw concrete, geometric modular elements and a somewhat monolithic style were largely considered eyesores.

The exposure of raw construction materials was an aspect emphasized by the approach. The style referred not only to raw concrete (called in French "béton brut"), but also to Jean Dubuffet's Art Brut.

Swiss-French architect Le Corbusier was a pioneer of the movement, with his 1952 Unité d'Habitation in Marseille. His generation of architects prioritized uncompromising truthfulness.

Most of these buildings are around 50 years old today. Those that were well-maintained have turned into highly desirable spaces; others are in a more problematic condition.

For their 1970s residential estate in London, called Robin Hood Gardens, Brutalist architects Alison and Peter Smithson designed "streets in the skies," or aerial walkways connecting the rows of apartments. 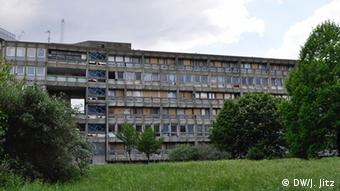 They were intended to promote interaction between the residents, but the rundown corridors turned into unattractive areas where people would dump whatever they didn't want in their own apartment.

The housing estate has been scheduled for demolition, prompting a campaign for its preservation supported by high-profile architects such as Richard Rogers and the late Zaha Hadid. The British government nevertheless decided against its heritage listing in 2015; the building now faces demolition.

Catherine Croft, the initiator of the campaign, still sees an overall positive development in the current fate of Brutalist buildings. As a result of public ownership and recession, the buildings were not well maintained, "so they were looking shabby," she says.

"But now the popularity of Brutalism is really rocketing. What we need now is to get local and national governments to realize what amazing buildings they have and get them to invest in them again," she says. 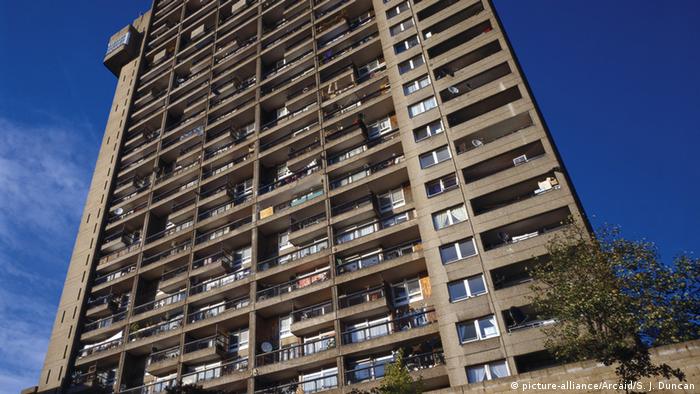 There are also positive examples in the fight to save Brutalism. In the 1970s, the Trellick Tower in London had an extremely bad reputation for crime, with tabloids nicknaming it the "Tower of Terror." After modernization measures, the tower was awarded a heritage listing in 1998. Featured in several music videos and films, the iconic tower has since gained cult status.

Brutalism aimed to offer a collectivist alternative to post-war architecture. Its bunker-like style has even been described by some architects as a method for processing war trauma.

But through successful examples of preservation, Brutalism has obtained a new edge. Philip Kurz of Wüstenrot has his own theory to explain the style's current popularity. "In a society that doesn't have many revolutionaries, these architects with revolutionary ideas are appealing to us," he says.

The exhibition "SOS Brutalism — Save the Concrete Monsters!" runs from November 9, 2017, through April 2, 2018, at the German Architecture Museum in Frankfurt.

Threatened or protected: 10 Brutalist buildings around the world