Even 75 years after its original release, the Disney cartoon "Bambi" continues to move children and adult audiences alike. Based on an Austrian novel, the film's environmental messages have had a lasting influence.

Many of us vividly recall the first time we watched the Disney classic, "Bambi." Most often those memories involve a great deal of tears and sadness.

The story of a young fawn making his way in the forest, "Bambi" traces the title character's transition from childhood to manhood. Modeled on the whitetail deer common to North America, Bambi is joined in his jaunts through the woods that make up his home by his mother and other forest animals.

Rabbit Thumper and Flower the Skunk explain the world to the young deer, who shows himself to be both naïve and childlike. They play in meadows, huddle in caves during rain storms, and learn about love and romance while cavorting in flower patches.

It's a syrupy start, with animals drawn with baby-like qualities to up the sweetness factor and win over the hearts of young viewers.

A tragic twist with a moral

The story quickly turns tragic though, when hunters arrive. Though never confirmed, it is implied midway through the movie that Bambi's mother has been shot to death by a hunter, leaving the fawn to fend for himself (with the help of the other forest animals).

It's a story that has brought tears to viewers of all ages - and led us to hug our moms just one more time. The first Disney film to employ the trope of the missing or dead parents, the movie only gets more difficult to watch as the newly independent Bambi faces grave danger when a forest fire rips through the woods he calls home. 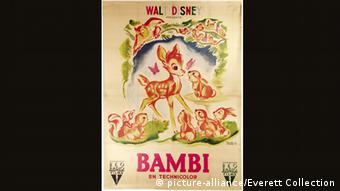 Released in 1942, "Bambi" revenues suffered due to delays in accessing the European market

Based on an Austrian novel by Felix Salten, which was written for adults and first published in 1923, "Bambi" is said to be one of the first movies to explicitly emphasize environmental awareness. It wasn't, as a result, entirely well received by audiences when released.

A 1942 editorial in the magazine "Outdoor Life" had editor Raymond Brown write the movie was "the worst insult ever offered in any form to American sportsmen."

Added to the bad reviews were initial losses at the box office. The film was was released in the middle of World War II and lacked accesss , the movie is said to have been Disney's favorite.

It would not only become an audience favorite, too, but it has also been employed in fire prevention campaigns over the years, including a series of 2006 public service announcements featuring footage from the film.

"Bambi" has long been credited with making people more aware of the impact their actions have on nature.

In December 2011, the cartoon, which traces animal life in the  woods, was added to the National Film Registry of the Library of Congress, cited as being "culturally, historically, or aesthetically significant." At its induction, the registry said the movie was being "recognized for its eloquent message of nature conservation."

By the time "Bambi" first opened in 1942, with a premiere in London on August 9 and then a brief run at New York's Radio City Music Hall, it had been in planning and production for nearly a decade. 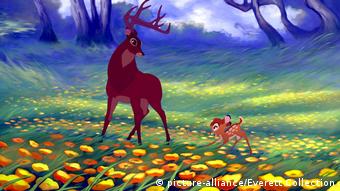 Originally foreseen as a live-action animation like "Fantasia" (1940), the film took years to produce, as it required great attention to detail in its drawings.

"I wouldn't hurry. I wanted it right," Walt Disney later explained in an interview.

Capturing life in the deep woods required quite a bit of study for the animators. Two fawns were gifted to the Disney studio by the Maine Development Commission. Other animals were brought to the Disney zoo to be studied. Disney wanted the animals to be portrayed accurately, both in behavior and appearance, even as they adopted more human-like qualities.

"It's a caricature with a certain little humanized touch, but still believable as deer as animals in the forest. We put in an intensive series of training on animal anatomy," Disney said.

The added study in anatomy and attention to detail in the animation paid off. Today, 75 years after its initial release, the original animation of "Bambi" has been reissued nearly a dozen times, and the American Film Institute has ranked it number three on its list of 10 best animated films. It remains one of the most memorable movies for the generations of people who have seen it.

The first Mickey Mouse comic in German appeared 65 years ago. Initially labeled pulp fiction, the mouse squeaked his way into the hearts of Germans; today, the comics are one of the most beloved children's magazines. (30.08.2016)

Argentinian cartoonist Guillermo Mordillo celebrates his 85th birthday on August 4. He's regarded as one of the most recognized cartoonists in the world, famous for his trademark noses. (04.08.2017)

Body painting is in fashion - does it appeal to you?

People have been applying colorful paint to their bodies since the beginning of time to enhance beauty or as war paint. These days body painting is enjoying a popularity surge. What are your thoughts on body painting?