The first Mickey Mouse comic in German appeared 65 years ago. Initially labeled pulp fiction, the mouse squeaked his way into the hearts of Germans; today, the comics are one of the most beloved children's magazines.

In March 1951, the German news magazine "Der Spiegel" published an article with the controversial title, "Comics - Opiate in the nursery." While discussions in the USA at the time centered on the kind of impact that superhero comic books could have on youth, in Germany, any type of comic was largely considered the "work of the devil" by many.

Still, on August 29, 1951, the first Mickey Mouse comic books hit store shelves. "Mickey Mouse - the colorful monthly" cost 75 cents ,and was the first German magazine to be published in full color. Yet it was only "one" story comprised of colors and speech bubbles. The first comics - which today are worth more than several thousand euros to collectors - were, however, slow-sellers. 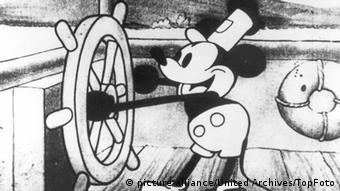 In post-war Germany, American comic books were accused of being responsible for increasing rates of crime among young people, according to Bernd Dolle-Weinkauff, head of the Research Institute for Young Adult Books at Johann Wolfgang Goethe-University in Frankfurt. Even though picture books had already made a start in Germany at that time, with text in verse printed below images, comic books were regarded as something new.

"This intertwining of text and images with this variety of grotesque figures and adventure stories struck Germany like a tsunami. And it was first brought here in the post-war era by American GIs," said Dolle-Weinkauff.

"The fast story-telling of tales of adventure with the wild characters that Disney comics presented were a red flag for many."

Germans were quite suspicious of this novelty and criticized anything that featured speech bubbles. Critics were worried that literate culture would go under, as children started to look at colorful pictures, with many fearing they would no longer read.

Disney takes up a special position

Despite all the criticism, Mickey Mouse became a success story. By the end of the 1950s, Germany grew more accepting of comics, with a growing chorus of people saying that Walt Disney was not detrimental to young people.

Dolle-Weinkauff is not surprised by that development: "In pop literature, there's always this divide between the public and the producer, the author and the publisher, who have to fight against resistance and censorship and the restrictions placed by pedagogues."

Disney then used the opportunity of its growing popularity in Germany to put its original animated film, "Steamboat Willie" back into German theaters, where it had been shown in the 1930s.

"That helped to seal the deal; Mickey Mouse was more or less tolerated after that," said the literature researcher. 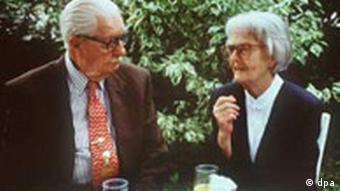 Because Mickey Mouse was the most recognized of all Disney figures in Germany at the time, publisher Egmont Ehapa named a series after him. However, from the start, the character of Donald Duck took up more room in the series of books, said Alexandra Hentschel, the head of the first German museum dedicated to comics, the Erika-Fuchs-Haus in the Bavarian town of Schwarzenbach.

The books were printed on a monthly basis, and as of 1957 came out once per week as they grew in popularity. Translator Erika Fuchs was in great parts responsible for that shift in perception. From 1951 to 1988, Fuchs was the editor-in-chief of the magazine.

"She played a large role in getting comics seen as salon-presentable," said the museum head.

"She added a little something to the comics that the American versions did not have."

With intricate puns and twists on words, quotes from Schiller and Goethe and a fine sense for the cultural characteristics that made the American comics unique, Fuchs not only translated the comics into German, she enhanced the German language as such.

Through her translations, she even invented the use of the inflective from in German grammar as the "Erikativ" tense, which is created when the infinitive ending of a verb is left out. Examples of this are the German words, "Seufz " or "Schnief" which translate respectively as "sigh" or "sniff."

"The fact that her translations weren't verbatim was a real work of art," explained Dolle-Weinkauff. "She had a unique style and was able to produce a unique manifestation of the characters that translated into German and were well.received by German children."

The publisher estimates that more than one billion comics have been sold since Mickey Mouse made his debut in Germany. As recently as the 1990s, hundreds of thousands of these comic books were routinely sold in stores on a weekly basis. Today, that number is just around 85,000.

The magazine is aimed at the 6 to 13-year-old age market, and despite its sinking sales numbers is still the market leader among children's magazines in Germany. 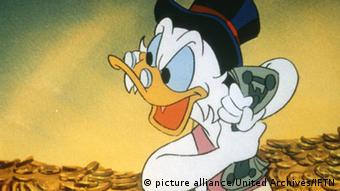 Scrooge McDuck on display at the Erika-Fuchs-Haus, comics museum

Unlike the American original, where the ducks stay in Duckburg and mice live in Mousetown, in the German version, all of the protagonists live in the same city.

"Entenhausen is a very pretty, very silly world populated by cool figures," said Hentschel. That's why it's not only children who love Mickey Mouse: adults do as well. It's such a diverse world that even the researchers are drawn to it. Donaldists, members of a non-commercial German group dedicated to studying "Donaldism," conduct research on the city of Entenhausen using scientific methods.

Mickey Mouse speaks to all generations

Over time, Mickey Mouse became a literary classic, explained Dolle-Weinkauff. He reaches across generations, with topics and contents that are not only intended for children but also speak to parents and grandparents. Furthermore, comics aren't viewed as skeptically in Germany as they are in neighboring countries like France and Belgium.

"Some parents are skeptical when their children read comic books," said Hentschel. "They believe that the child's reading abilities will be diminished."

Since the 1980s, however, the overall German market for comic books has experienced growth, though they have changed their name: The books are no longer known as comics; they are now called graphic novels.

From 8-bit plumber to global phenomenon, Nintendo's video game icon Mario has come a long way in the past 30 years. Mario's maker Shigeru Miyamoto says that was his intention. (13.09.2015)

From "Beetlejuice" to "Frankenweenie," cinema-goers know Tim Burton for his eerie yet quirky take on things. His lesser known artwork, which often serves as the basis for his films, is now on show in Germany. (17.08.2015)

Disney's first resort in mainland China has opened its doors after years of construction. The park is expected to draw between 15 and 50 million visitors a year. (16.06.2016)