With just a one-point lead over Chancellor Gerhard Schröder's SPD, Angela Merkel's CDU finds itself in a difficult position while the battle to determine the next German leader heats up. 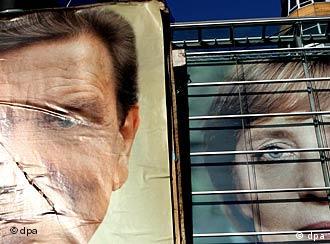 Only one can be chancellor

Merkel's opposition Christian Democrats (CDU) appear to have scratched out a narrow election victory over Gerhard Schröder's Social Democrats (SPD) in Sunday's general election, but crucially failed to secure the ruling majority they had sought.

The first official preliminary returns of the cliffhanger election showed that the CDU and its Bavarian sister party, the Christian Social Union (CSU) took 35.2 percent of the vote while the SPD followed closely with 34.3 percent.

Merkel's preferred coalition partners, the free-market liberal FDP had a surprisingly good showing, grabbing 9.8 percent of the vote. The Left Party, an alliance of disgruntled SPD members and former communists, came in at 8.7 percent while the Greens clinched 8.1 percent.

According to the latest preliminary official count, the conservatives are also the strongest faction in parliament with 225 seats to the SPD's 222.

Despite the failure of any single party or coalition to secure a majority, both Schröder and Merkel both immediately insisted they had each won a mandate to form the next government.

Merkel said she had the upper hand and would negotiate with all the major parties on creating a coalition.

"We are the strongest party and want to form the government," Merkel told a noticeably subdued crowd of supporters at the CDU headquarters who were dejected by the CDU/CSU's poor showing.

Pollsters had widely predicted for weeks that the conservatives would clinch around 40 percent of the vote, assuring it a smooth coast to victory along with the FDP.

In contrast, SPD supporters were jubiliant as the exit poll results started trickling in. 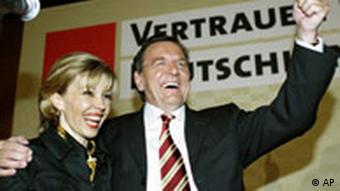 Schröder with his wife Doris

Chancellor Schröder, 61, said his party, energized by a come-from-behind result that beat most expectations, should be proud of the result.

For several minutes, the chancellor stood at the podium, unable to quiet the wild cheers and applause of the party faithful gathered at the Social Democrats' Berlin headquarters.

He clasped his hands above his head in a victory gesture and, after finally calming his supporters, staked a claim for four further years as chancellor.

"I am certain that there will be a government under my leadership in the next four years," Schröder said.

He faces serious hurdles, however. The coalition government his SPD formed with the Green party for seven years is no longer mathematically possible.

The SPD, however, has played a powerful game of catch-up from the early days of the campaign, when it trailed the CDU by close to 20 percentage points.

Experts say the only possibility would be a so-called "traffic light" coalition with the SPD, Greens and the free-market liberal FDP, which surprised everyone by garnering 9.8 percent of the vote. 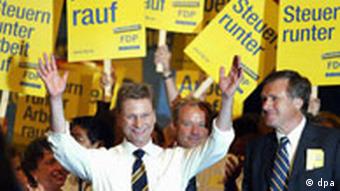 FDP leaders, however, said they would rather stay in opposition than join a government with Schröder and the Greens.

"We don't have the majority for the innovative, necessary reforms needed to change our country," said FDP deputy leader Wolfgang Gerhardt. "That holds us up and it holds the country up."

For weeks, the CDU and FDP had been planning a coalition government that would take an aggressive approach to trimming Germany's bloated welfare system and reforming the labor market to encourage investment and growth. With the CDU only winning 35.2 percent of the vote, such a coalition is now impossible.

"While Germans understand that they need fundamental economic reform, if they want to tackle unemployment, they don't want radical economic reform and don't want to give up their benefits," said Karen Donfried, senior director of the German Marshall Fund in Washington D.C. in an interview with DW-WORLD. "I think Schröder was able to play very well off of that." 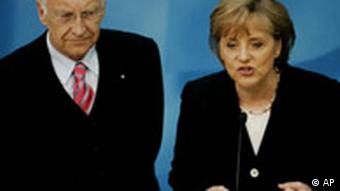 CDU leader Angela Merkel said her party, after claiming the majority share of the vote, has been given the job of forming a government. But her options are just as limited after an election night that surprised many Germans.

"I was astonished," said Oliver Suchy, at the SPD headquarters. "I never thought the CDU would have done so badly. I think in the last two weeks, people started realizing what the CDU program really meant and it was too radical for them."

The Social Democrats had slashed the CDU's early lead in half by last week. Chancellor Gerhard Schröder put in extra campaign speeches in a bid to sway undecided voters, reportedly about a quarter of the electorate, just days before the poll.

The big question remained whether Merkel would secure her preferred alliance or be forced into an awkward "grand coalition" with the Social Democrats. Experts and industry heads have warned that such a coalition could halt necessary reforms through political infighting.

Merkel said she was willing to talk with "any democratic party" about coalition possibilities, no longer ruling out liaising with the SPD. The grand coalition would put her in the chancellery and likely mean the end of Schröder's political career.

Voter turnout slightly down on 2002

Tens of millions of Germans voted on Sunday but despite sunny weather across the country, voter turnout was slightly lower, at 78 percent of eligible voters, than in 2002, when 79.1 percent of the 62 million Germans eligible to vote turned out.

Overhang seats and a delayed election: how the SPD might yet become Germany's strongest party. (Sept. 18, 2005)

The CDU was disappointed, the SPD, jubilant. Early election results surprised the political landscape, and who will rule the country is still anyone's guess. (Sept. 18, 2005)

The result of the German polls is a big surprise. Contrary to pollsters' predictions, Germans didn't vote for a change in government. A grand coalition is the only way out of the mess, says Deutsche Welle's Uta Thofern. (Sept. 19, 2005)