Whisky from Germany: Starting small but aiming high | Germany | News and in-depth reporting from Berlin and beyond | DW | 01.01.2020

German whisky is still a niche product. But it can already hold its own for quality and taste, and the industry is growing. Scotland and Ireland share foggy, rugged landscapes where jagged cliffs jut out from lush greenery. Sea waves batter coastal cliffs and it is cold and uncomfortable. Men are still men there, hard workers, rough guys, fighters. And these men, with their rough-hewn, weather-beaten faces, are always holding glasses full of a strong, amber fluid, as if this were a necessary corollary to life in such climes. Just looking at them, you feel the burning sensation of whisky in your throat …

These are the common whisky cliches so often seen in advertising. And many people indeed believe this drink comes only from Scotland, Ireland or the USA.

But some know better: Whisky is now also distilled in Germany. It may sound incredible, but Germany has 200 distilleries — more than Scotland does. 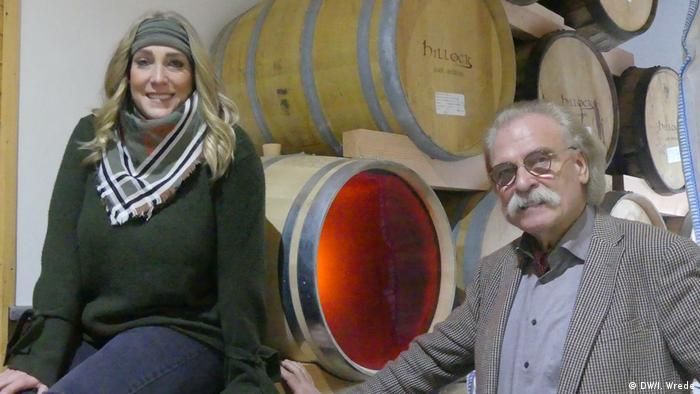 One of the first German whisky distilleries

But those distilleries produce rather small quantities, so their world market share is only 0.4 %.

Michael Habbel is a German whisky distiller.  "The smallest distillery in Scotland makes around 250,000 liters (66,043 gallons)," he says. "So at 30,000 liters of pure alcohol, we are comparatively tiny."

Habbel says he distilled his first whisky in 1977 using a normal still for making grain spirits. "This makes me one of the pioneers in the history of German whisky," he says. He points out that whisky is also a kind of grain spirit, like the "korn" often drunk in Germany. "If you keep ordinary korn in a wooden cask for three years, it can be sold as whisky," Habbel said.

At that time, Habbel had just inherited a korn distillery from his father. Since the Spirits Monopoly Law was still in force in Germany at the time, he was not allowed to distil real malt whisky, but only korn from grains, containing a maximum of 15% malt. These days, thing are different. The EU has harmonized the European market: What you can do in Scotland, England and Ireland, you are allowed to do in Germany, Italy or France as well.

For more than 140 years, the Habbel distillery, housed in a listed yellow brick building with white lattice windows, has been located on the edge of the Ruhr area. Next to the entrance is a sign bearing the name of Heinrich Habbel, who bought the distillery in 1878. Originally, only korn was produced here; today, fruit brandies, herbal liqueurs and gin are also manufactured. 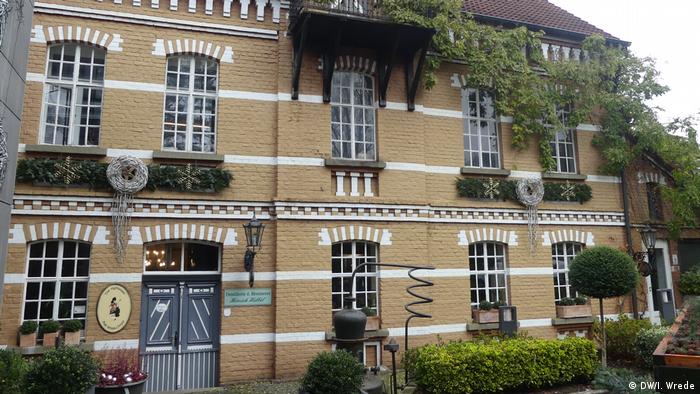 The distillery has been in the family for four generations

The production area of the distillery is directly behind the beautifully carved wooden front door. Light from chandeliers is reflected in two, old copper stills that have been in use for four generations. The walls are decorated with awards and prizes.

The whisky produced here has also won several awards at international trade fairs. Despite this, it still has to be financed by the other products. This is partly because the Habbels invested around €1.3 million in a whisky distillery in 2013, an investment that won't pay off for several years.

"I see it the same way a forester does," Habbel says. "The tree you can cut down today was planted by your father or grandfather, and it's a bit like that with whisky." Because his father never distilled any whisky, there was no old whisky he himself could sell, he explains. "My daughter will profit one day from the casks we make now," he says. Distilling whisky is just something he enjoys doing. 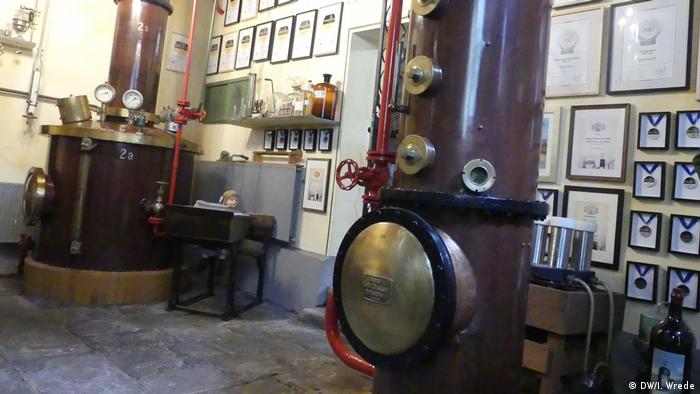 The old stills are still in use

All done by hand

His daughter, Michaela Habbel, joined the family business in 2011 after finishing her studies and now runs the distillery with her father. The company has grown so much now that she can no longer take care of the actual distillation itself, but leaves that up to her father or an employee, she says: "My tasks are product development in the gin and liqueur sector and strategic planning and cask management for the whisky. That means I select the casks in which certain distillates are stored; we don't use just pure barley malt, but also rye or spelt from the region." On the side, she is also president of the German Whisky Distillers Association. 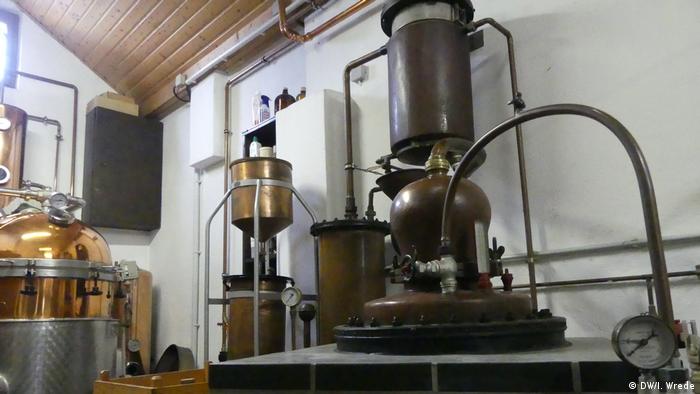 The equipment has a long tradition behind it

To get to where the whisky is made at the Habbels', you first go through a kind of test kitchen full of bottles and bulbous carboys and then through another production room containing old stills. On the walls are shelves full of ingredients such as ginger, lemon, rhubarb, Seville orange peel or peppermint, which are used for flavoring herbal liqueurs or gin. 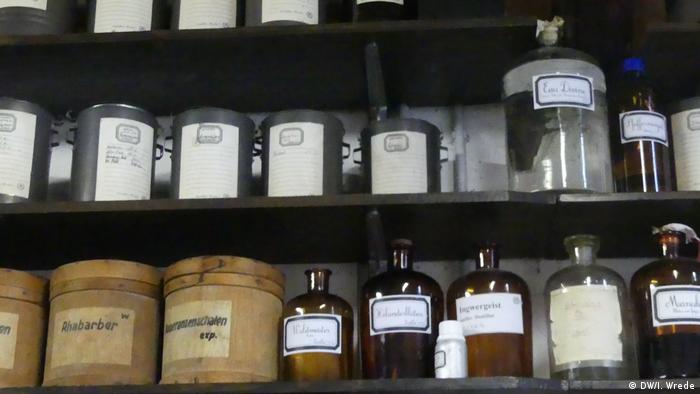 A room further on, bottles are filled and labeled — all by hand. Then you go outside and over a courtyard to the new building, built especially for making whisky. 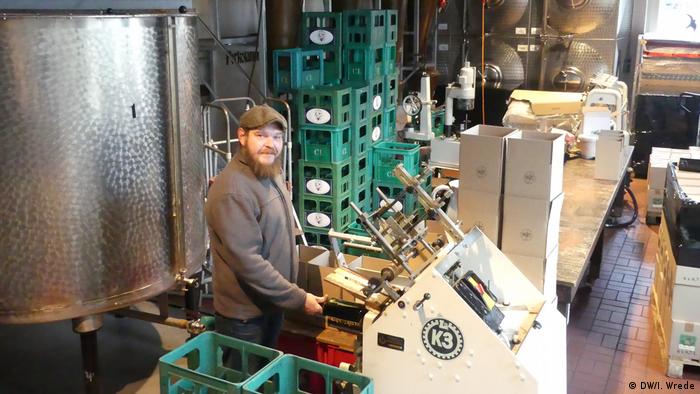 The bottles are labeled by hand

The cask decides the quality

Here, mash and crude distillates known as low wines are stored in large square steel tanks. At the head of the room is a large copper still in which alcohol is distilled from the mash. The smell is bitingly intense. "It smells of peated barley," explains Michael Habbel. "At the moment we are processing peated grain or barley malt. That produces a whisky that will taste really smoky, peaty."

But the really typical taste of a whisky doesn't develop till later, Michael Habbel explains. "The most important thing is the cask. One-third of the quality of a whisky results from distillation and two-thirds is determined by the cask. For example, we use used bourbon casks of American white oak, Spanish cherry-wine casks, port-wine casks, Chardonnay or red-wine casks. Our flavoring is the casks and the time we leave for maturing." 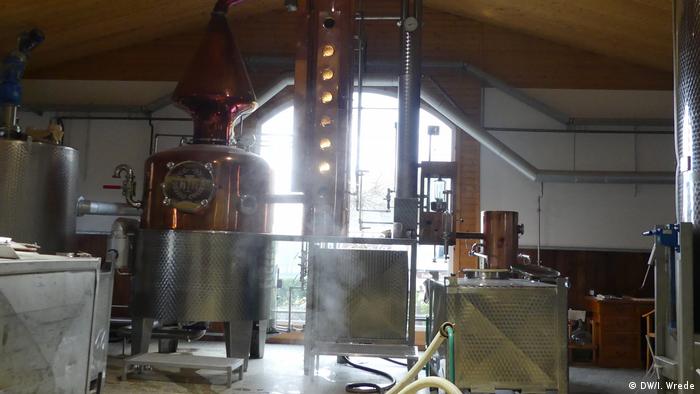 The whisky is produced in a new building

Whisky from the mine galleries

Of course, this also requires storage space. But that is something completely lacking at the moment, says Michael Habbel. At least 100 new barrels are added every year, he says, so new storage is urgently needed.

But the distillery is not the only place they use to keep the whisky. "We have built an underground storage facility at the German Mining Museum in Bochum," says Michaela Habbel. She says whiskies are currently stored there in various sweet wine casks.

"Once upon a time, we used to deliver to mines," she says, explaining that miners back then received part of their salary in kind. Because no smoking was allowed underground, the workers were given chewing tobacco and kornto take with them down the mines. "We wanted to put a kind of homage to mining on the market, because we are grateful to the mining industry. Those are our roots," she says. The result, the 9-year-old Hillock Single Malt "Bergbauedition," is selling well. The other Hillock whiskies also have enough fans. 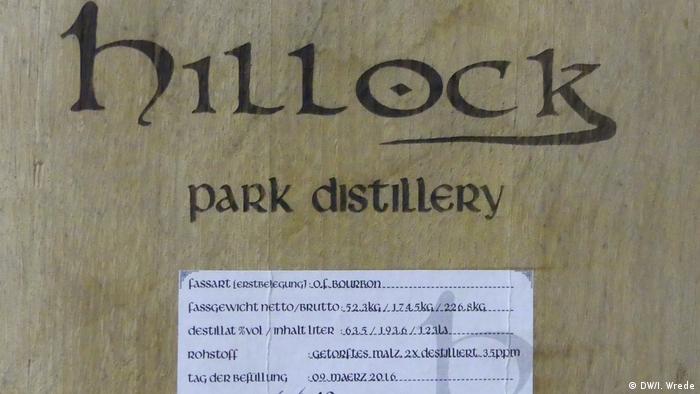 "Business is going well," says Michael Habbel with satisfaction. "The only problem we still have is that we have too little to sell. The whisky that we are now producing here in larger quantities has only been available since 2014 and of course it has to be stored for a certain time." It will take Habbel three to five years to sell several thousand bottles from one batch.

"At the moment we only have batches between 800 and 1,500 bottles and they are always gone very quickly," says Michael Habbel.