Where the Easter Bunny came from

Everyone knows bunnies don't lay eggs, right? So how did bunnies and eggs become inseparable at Easter? We got to the bottom of this — and other — odd Easter traditions. 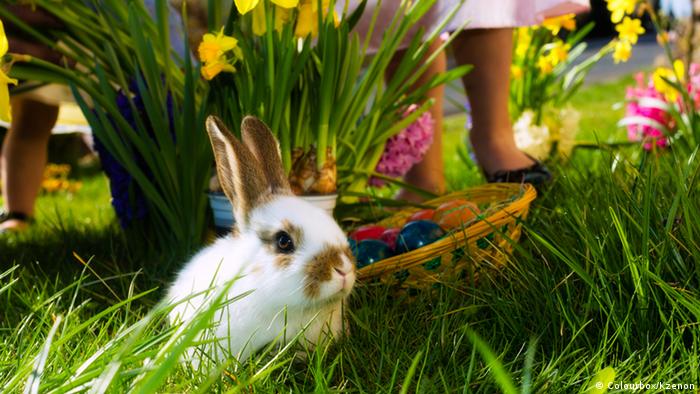 The tale of the Easter Bunny and Easter eggs sounds like something that should have originated in the Middle Ages, but it didn't. It was the era of Enlightenment that saw the emergence of hares hopping across the fields while laying (and hiding) colorfully painted eggs.

The legend has about as much to do with the Resurrection of Jesus Christ as Christmas has to do with Santa Claus. And, oddly enough, it can be traced back to Protestants. In an attempt to explain to their children why there were so many eggs around at Easter, they simply put the blame on bunnies, which have always been known for their fertility. That's how Alois Döring, an expert on folk traditions based in Bonn, Germany, explains this strange phenomenon.

"During Lent, Catholics were not allowed to eat eggs, so on Easter many of them could be found in the chicken coops," Döring said. The Protestants rejected the fasting tradition, which they regarded as imposed by the pope. But that didn't mean they rejected Easter, which they likewise celebrated with colored eggs.

Eggs were seen as a symbol of new life, and therefore a symbol of the resurrection of Christ. 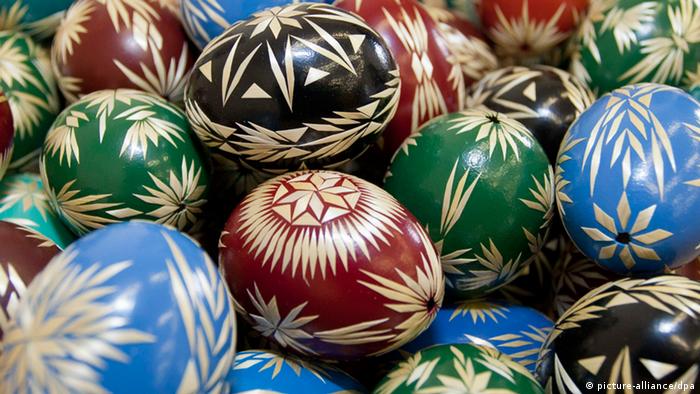 Embellishing eggs for Easter is a tradition across Europe and beyond

The making of a blessed egg

Back then, the eggs used to be blessed in the Catholic Church, added the folklorist. The blessed ones were painted in order to distinguish them from those that hadn't yet received a blessing. The colored eggs were then given away as gifts.

"The priests also liked the beautiful decorations," Döring said. During the Baroque era, the clergy would even mention various egg-painting techniques in their sermons.

Was it an act of revenge by the Protestants that the beautiful blessed eggs came to be associated with an animal as mundane as the hare? That's just speculation. "All we know for sure is that the first Easter Bunny stories appeared in 17th-century Protestant literature," said Döring.

The hare wasn't the only bringer of Easter gifts. Depending on the region, the fox and the raven also carried out this task, but they didn't last for long. "Hares lent themselves better to being humanized," the folklorist speculated.

Expert Gunther Hirschfelder from the University of Regensburg follows a different theory based on the fasting guidelines spelled out in the Gospels of the New Testament. They mention another animal associated with fasting, namely the rock hyrax, which is also known as the dassie.

That animal doesn't exist in Europe but only in southern Africa and especially some Middle Eastern regions - i.e. where most biblical stories took place. The rock hyrax even gets a direct mention in the Book of Proverbs, where it is attributed great wisdom despite its petite size.

But size doesn't matter: As unlikely as it sounds, the rock hyrax is actually genetically related to elephants, although it rather resembles a little hare with shorter ears.

The hare and a fake fertility goddess

Some experts have searched for other potential explanations in old legends. They came across a Germanic goddess of spring and fertility named Ostara, who was said to be regularly accompanied by a hare. But this theory has turned out to be wrong. 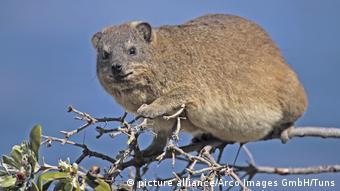 The rock hyrax was also believed to bring Easter eggs

"We now know that this goddess never existed," said Döring. "She was invented by myth-inclined esoteric circles in the 19th century."

Consequently, the assumption that it was Ostara who gave Easter its name cannot be true. "It's possible that the word Easter goes back to an Indo-Germanic word that meant aurora," Döring explained. After all, the church celebrated the resurrection of Christ at dawn, and also baptized new members during the service — which is why the word Easter could just as well go back to the Northern Germanic word "ausa" or "austr," meaning "to pour water."

Fire and water both belong to Easter

Blessed baptismal water was believed to have healing powers. Another reason why the water was regarded as holy was the fact that the Easter candle was immersed in it while a blessing was pronounced, explained Döring. And since the 12th century, the Easter candle has been ignited with a larger fire symbolizing the resurrection of Christ, whose "light drives out the darkness of the heart."

A holy fire constitutes the climax of Easter celebrations for Orthodox Christians. In line with tradition, the Greek-Orthodox Patriarch enters the Church of the Nativity in Jerusalem with an oil lamp. A holy fire is believed to come down from heaven, igniting the oil lamp. 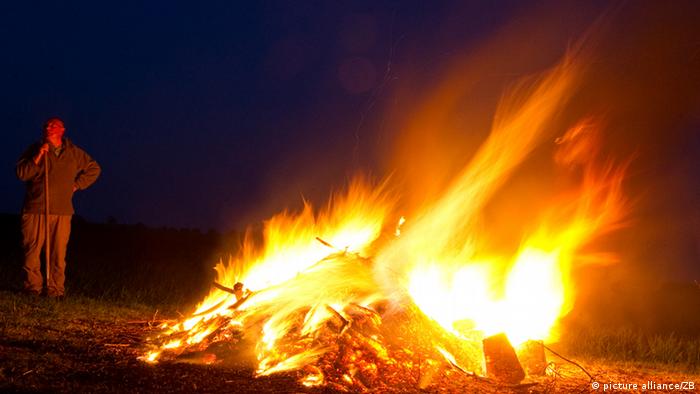 The patriarch then passes around the lamp so that the assembled pilgrims can ignite their own candles with the flame. The ritual symbolizes hope before the resurrection of Christ.

For centuries, large Easter fires have been ignited in many parts of Germany. Huge piles of wood and dry sticks are burned during the night before Easter. This ritual clearly has pagan roots. In pre-Christian times, the fires were intended to drive out the winter spirits. Easter fires have become a part of present-day Easter celebrations despite the destruction they can cause — and despite strict fire regulations in Germany.

"In Germany, fires are as closely associated with Easter as the Easter Bunny and his eggs," said Döring.

Even in increasingly secularized societies, Easter celebrations are likely to remain a regularly observed custom, the folklorist believes. After all, the dates have been fixed for centuries. Following a ruling of the Council of Nicea in 325 A.D., Easter takes place during the first Sunday following the first full moon after the beginning of spring.

That means that Easter often takes place between March 22 and April 25. That is when the year's newly born bunnies can once again be seen happily hopping around in the fields.

Israel expects an influx of visitors at Easter

This year the Easter feast in Jerusalem will be like no other. A number of specific circumstances will ensure an even larger than usual onslaught of pilgrims and tourists. (10.04.2017)

There are usually plenty of presents at both Easter and Christmas. But for German retailers, Christmas is a much bigger deal. And yet, the Easter bunny has overtaken Santa - well the chocolate variety at least. (02.04.2015)

Sprinkle, roll, dye and hunt: Easter around the world

All over the world, people celebrate and observe Easter this week. Solemn church masses, processions, chocolate bunnies and eggs come to mind. Traditions vary from one country to the next - and some are quite unique. (19.04.2014)