Berlin's burgeoning arts scene offers no lack of unusual past-times. But the experimentalism can go too far, as Rebecca Schmid found out at a late-night concert and yoga session.

Many local artists will tell you that Berlin's avant-garde scene surpasses that of other cultural capitals, and it's not only because of the low cost of living. Berlin may not meet the standards of Parisian chic or move at New York's adrenaline pace, but perhaps no other city offers such fertile ground for experimental modes of performance and recreation.

It wasn't until I moved here that I had ever heard of "chess boxing" (a competition involving both distantly related activities) or attended opera that resembled cabaret on crack. While genre-bending is gathering speed all over the world, the trend is highly advanced in the German capital - for better or for worse.

In a city that turns its back on tradition, everything from board games to classical music has the opportunity to fearlessly reinvent itself. Nowhere exemplifies this spirit better than the Radialsystem, founded in 2006 as a center for dialogue among the arts. From musical wine-tasting to the unusual theatrical settings of the Kaleidoskop chamber music ensemble, the arts space pushes the boundaries of music, theater and dance in every possible way.

Bach on the floor

One recent evening, I ventured out to the Radialsystem's "Nachtmusik Barock + Yoga," which, as you might have guessed, is a combination of baroque music and yoga. Joining classical music with yoga is, in principle, not so far-fetched. I've met opera singers who integrate the ancient Indian practice into their breathing and pedagogical methods. 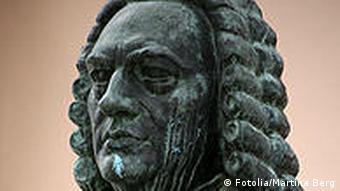 What would Bach say?

But I never imagined that I'd listen to a concert of Bach cello suites while lying on a mat.

In the elevator on the way up to the studio, an older man asked with a chuckle, "You yoga people aren't taking the stairs?" Silence followed. "Well," he concluded, "We're about to do some exercise!"

The studio was darkly lit with mauve yoga mats arranged in concentric semi-circles topped with black and red pillows. The high concrete ceilings of the converted water-pumping plant give the space a retro feel, with views of the Spree River outside adding some charm and serenity - although I felt slightly disoriented when I noticed a small piano bench at what was apparently center-stage.

Most people changed into comfortable clothing, and the séance began. There is practically no break between the class and the concert so that participants maintain a state of relaxation and concentration, as the instructor Lisa Stepf explained to me. The concept is based on her research at a yoga center in India where she discovered that participants were more emotionally receptive to music right after doing yoga.

The course consisted of basic Hatha yoga, a meditative and less physically strenuous form than its Ashtanga counterpart. After some seated positions that loosen up the spine, we got on all fours and began with forward bends and leg extensions.

Try doing that in a jacket and pumps. Indeed, one woman was severely limited by her garb - a fitted, pin-striped blouse - and stood wide-eyed as everyone in the room twisted their bodies in unison.

Relax, but not too much

The participants, about 40 people, demonstrated a range of proficiency, from spandex-clad enthusiasts who proudly launched into each pose to more intrepid beginners who groaned or laughed to themselves. 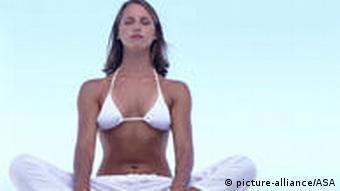 After the "sun greeting" and some balance positions, the class ended with the so-called "corpse pose," which entails lying flat on one's back. It is tempting to fall asleep in this position, but the idea is to maintain both extreme relaxation but awareness. My senses were awakened when I heard the cellist tuning his instrument from a corner of the room, and I gathered the concert was about to begin.

Stepf encouraged us to put on warm clothing as the room filled up with more listeners. Some people even covered themselves with blankets. Nap time? I wasn't sure whether to lie down or sit, but eventually decided to join the rest of the room and close my eyes for Suite Nr.3 in C-Major by J.S. Bach.

The cellist's proximity, and the fact that I was lying on the floor, provided for a very immediate audio-sensory experience, although the acoustics were not very flattering to his instrument and I was somewhat taken aback when I looked to the side and was face-to-face with a woman who was clearly half asleep.

The cellist's breathing took on a new intensity as well - or was that the breathing of the people around me? Fortunately, no one snored.

I'm all for new ways of exposing people to culture, but I'd prefer to take my Bach in the concert hall, and my yoga in the fitness studio.

The next yoga concert takes place at Radialsystem on Saturday, March 5.

Queer Berlin is almost a tautology. In a city in which homosexuality was once glorified, and then so horribly vilified, today LGTB culture is a driving force of the Berlin underground, as DW's Stuart Braun found out. (25.02.2011)

Radialsystem: new space for the arts in Berlin