The European Union, Britain and the US are deliberately ignoring war crimes committed by the Ethiopian army in the Horn of Africa nation's Somali region, Human Rights Watch said in a report. 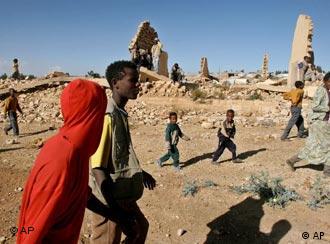 By not speaking up, the West is an accomplice to the violence, said HRW

"Our report finds that Ethiopia has been executing, torturing and raping civilians," Georgette Gagnon, HRW's Africa director, told journalists at the launch of the report on Thursday, June 12, in Nairobi. "It has burned villages as part of a scorched earth campaign."

London, Brussels and Washington provide billions of dollars in aid and military assistance to Ethiopia every year but are overlooking the issue, Gagnon said.

"The silence of donors amounts to complicity," she added.

HRW interviewed more than 100 victims and eyewitnesses in Kenya, northern Somalia and Ethiopia to put together its case.

The report says that following an April 2007 attack on a Chinese oil installation by the Ogaden National Liberation Front (ONLF) that killed more than 70 Chinese and Ethiopian civilians, the army responded with "brutal force" against ethnic Somali civilians in the Ogaden Area of the Somali Region.

According to HRW, the army has executed at least 150 people -- many of them in demonstration killings -- forcibly displaced tens of thousands of people, burned dozens of villages and conscripted civilians into militias to the fight the ONLF.

The peak of the abuses came last year, Gagnon said. However, it has only tailed off because most of the villages have already been burned, she added.

The Ethiopian government, which HRW says is orchestrating the campaign, has repeatedly denied targeting civilians and burning villages. However, it heavily restricts access to the Somali region, even preventing humanitarian aid from going in.

HRW called on the US government, which sees Ethiopia as a key ally in fighting terror in the Horn of Africa, to investigate reports of abuse and withdraw funding to the specific units involved.

Human rights are in danger because established democracies are accepting unfair elections in other countries, Human Rights Watch said in its annual report. China, Turkey and the US were also reprimanded by the group. (31.01.2008)