Germany is a land of rules and regulations. And that's proving a challenge for skilled migrants who are struggling to get a foot in the door of the job market. But BQ-Portal is trying to change that. 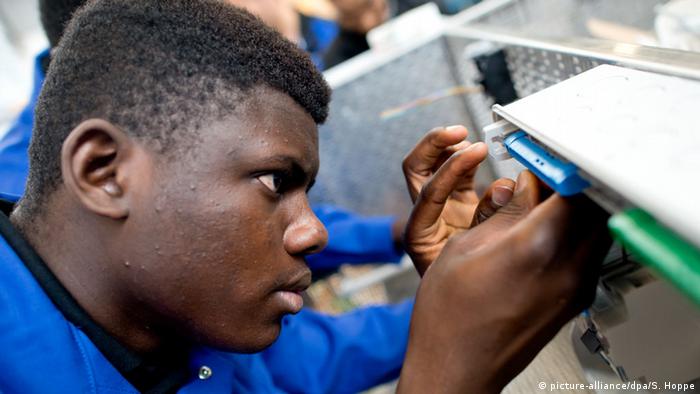 What does a heating engineer learn during his apprenticeship in Syria? What does vocational training for carpenters look like in Poland? And what does a Moroccan have to know to become a programmer in her home country?

Finding answers to these questions used to be like looking for a needle in a haystack. But now, thanks to German website #link:https://www.bq-portal.de/en:"BQ-Portal"#," they're only a click away. At a time when companies complain about a shortage of skilled workers, thousands of highly trained refugees are streaming into Germany. By enabling employers to better assess the qualifications they have earned abroad, the platform helps solve one of the big puzzles of the day. But getting there wasn't easy.

"Researching countries like Syria is especially hard," the head of BQ-Portal Daniel Wörndl told DW. Even though his team has good connections on the ground, "it happens that the contacts break off," he said. "Sometimes we don't receive any news for weeks, and we're not sure whether the person still works there or has already left the country."

However, the staff's tireless detective work means they now have detailed descriptions on 40 different job training programs in the war-torn country - among them heating and electronic engineering. These are exactly some of the fields German companies are struggling to find qualified talent for.

A collection of almost 1500 job profiles

A recent study, published by the Federal Employment Agency, concluded that there was no shortage of skilled professionals in Germany. Still, some sectors, such as engineering and healthcare, struggle to fill apprenticeships.

To bridge this gap, the government introduced the German Professional Qualifications Assessment Act in 2012. The law gives newly arrived migrants the right to have their foreign certificates assessed and ranked relative to German standards.

The hope was to better match them with employers. But it has also left authorities overwhelmed as they wrestle to make sense of scores of different vocational training systems from all over the world.

This has made platforms like BQ-Portal more needed than ever. The Federal Ministry of Economic Affairs and Technology (BMWi) commissioned the project in 2011 in cooperation with consulting company IFOK, IT service provider ]init[ and the Cologne Institute for Economic Research (IW Köln).

Since then, Wörndl and his colleagues have catalogued information on 73 countries with more than 1460 professional profiles. Only one continent on the site's interactive #link:https://www.bq-portal.de/de/db/berufsbildungssysteme:world map# remains nearly blank: Africa. 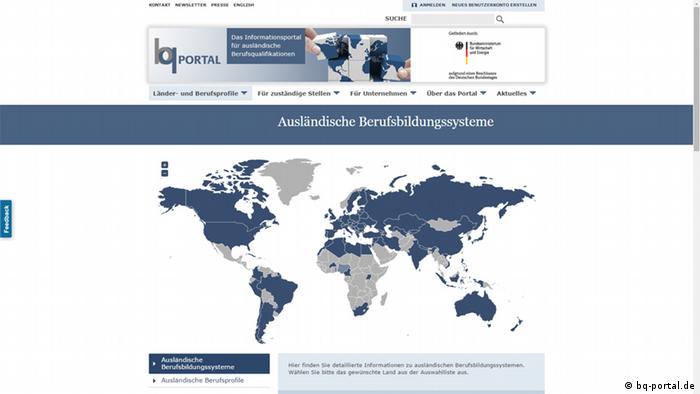 But probably not for long. Wörndl and his team are always busy hunting for new information from around the world. Together, they bring 17 languages and a stew of different cultural and professional backgrounds to the table. "That's why we can call and write emails to almost every country," Wörndl said proudly.

At the moment, the researchers have zoomed in on countries with high refugee rates that have a good shot at permanent residence, such as Afghanistan, Pakistan and Eritrea.

Of the 15,000 applications reaching authorities last year, 96 percent were ranked as "partly" equivalent to German certificates, while 78 percent were considered "fully" equivalent. These figures include academic jobs, too.

Contrary to the government's own platform#link:http://anabin.kmk.org/anabin:anabin#, BQ-Portal doesn't focus on higher education certificates, but on apprenticeships. Wörndl and his colleagues find the relevant information by asking foreign education ministries and institutions, or scouring the internet.

And the award goes to...

"We have 345 registered users, who work actively on the platform and feed it with information." Users include a string of professional associations such as the Chamber of Commerce and the Chamber of Agriculture.

By thinking outside of the box, BQ-Portal's has also attracted attention outside of Germany. Last month, it won the #link:http://www.epsa2015.eu/:"European Public Sector Award,"# which honors innovative ideas that tackle challenges in society.

According to Wörndl, one of the best things about the portal is that it can be used by anyone, anywhere: "Someone from Munich can just as well submit information as someone from the Chamber of Commerce in Saarbrücken or in Berlin."

Transparency is another key element for Wörndl. Everyone can browse the BQ-Portal to get an overview.

But it's not always smooth sailing. "Obviously, there are problems from time to time," admitted Wörndl. Even if a foreign degree receives a "fully equivalent" ranking, there is still a risk that the applicant's language skills do not suffice to work for a German company.

However, the list of happy #link:https://www.bq-portal.de/de/seiten/praxisbeispiele: endings # is long - especially in electrical engineering. "In this field, companies supported engineers from Bosnia and Poland throughout the assessment process and now they are very well integrated," told Wörndl.

Whether a hearing aid professional from Poland, a mechanic from Turkey, or a dental technician from Albania - BQ-Portal helps them work in their old professions as part of their new life in Germany.

Information about the education systems and training programs in 73 countries