"We Were Told to Stop Trespassing at All Costs"

As a member of the former East German army, Peter Zahn guarded the hottest spot on the inner-German border at the western-most tip of the Eastern bloc. He told DW-WORLD.DE about the experience. 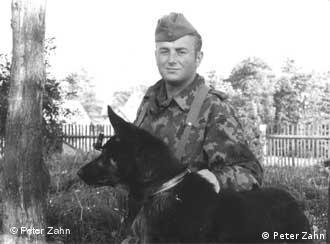 Peter Zahn was stationed near the US-run Point Alpha

DW-WORLD.DE: What were your tasks as a border guard in the former East German army, the NVA?

Peter Zahn: I served as a border guard in the East German NVA from May 2, 1968 to Oct. 29, 1969 as part of my 18-month basic military service. For the next one and a half years I was a soldier in the Border Training Regiment in Eisenach/Thuringia and then a private in the Border Company Geisa/Rhön. At that time Geisa was the western-most city in East Germany and in the entire Soviet-dominated Eastern bloc.

Although we never had to use our firearms against escapees, at least while I was there, the Geisa area was the hottest point during the Cold War. It was assumed that, in the case of war, the Warsaw Pact states would launch an attack from this area.

One of our tasks was to observe the border, which included tactical intelligence of what were then hostile powers (such as the American armed forces at nearby Point Alpha), securing the border and fulfilling customs duties. Another and more important task was to prevent people from illegally crossing the border or vandalizing the border facilities.

We were never given explicit orders to shoot but we were told in the daily briefings to stop trespassing at all costs. We were also responsible for the Border Zone (5 kilometers, 3.1 miles) and Protection Area (500 meters, 1,640 feet) next to it.

How did East German civilians react to you?

The population was resentful, and some even hated us because we had to carry out inspections of vehicles and people on the roads.

If a local doctor, whom we were also patients of and knew well, wanted to visit a patient in a neighboring village, we had to search the trunk of his car. When he returned, it was the same procedure all over again. As a normal person, we would have done away with this kind of nonsense, but we never knew if the traveler was a spy for the border police and would inform the company commander of lax controls.

We also had to make sure that the farmers left their fields in the Protection Area one hour before the calendar sunset. The farmers were quite resentful in some cases.

All in all, our relationship to the civilian population was not negative. Some of us found girlfriends and even future wives in the surrounding villages.

Were you indoctrinated by your superiors?

We received political lessons, although we weren't necessarily expected to spout the same line as the political officer. However, our superiors reported their impressions of our political attitudes to a representative of the Ministry of Security, who regularly visited our border company undercover. The officers always seemed somewhat nervous during these visits, but they left us cold.

What did the border mean for you, personally or as a soldier? Zahn now lives in Leipzig and is head of computer service at the Univ. of Music and Theater

Due to my own experiences and the political education I had received at home and at school, I saw the border as necessary -- for example, when doctors educated in East Germany wanted to settle in the West after their studies.

At the same time it was strange. The idea of shooting at other people was simply unthinkable. The refugees were often young people who didn't know what consequences their actions had on their families, for example, and couldn't be considered guilty. I think everyone in our company felt the same way and -- thank God -- we were never put in such a situation.

Our part of the border was a paradox, really. In contrast to its supposed geo-strategic significance, which we didn't grasp at all then, things were relatively quiet. It can't be compared with the situation at the Berlin Wall, where border troops were often faced with the decision to fire on escapees.

How did you experience the fall of the Iron Curtain?

I saw the reunification coming years in advance, though I didn't know exactly when. Nov. 9, 1989 was much more exciting for me. While I was working as an academic assistant in the physics department at what was then Karl Marx University, I was asked to become a reserve officer. After much hesitation, I agreed.

After the Wall fell, we were in a state of delirium. We submitted a request for our reserve activities to be ended, which was approved a few days later. We visited Helmstedt and Braunschweig in West Germany, which would have been impossible before. In the NVA even listening to western radio stations was punishable and there we were on an outing in the West.

"In the East, the Border was Hidden From the Public"

Border memorials were largely limited to the West German side of the border before 1989. But even after reunification, the East German perspective is still largely missing, says an expert on the issue. (02.11.2006)

"The other side was always watching"

DW-WORLD.DE spoke to a former unit commander at US Observation Point Alpha about his experiences while patrolling the German border during the Cold War. (02.11.2006)

Germany ended one of its ugliest chapters when a judge convicted four East German officers for their role in border deaths. But like dozens before them, they received no punishment. (11.11.2004)