Watch out for the Witches

Last night witches transformed the Harz mountains in Germany into a bizarre spectacle of heathen rituals and pageantry on what is known as Walpurgisnacht. 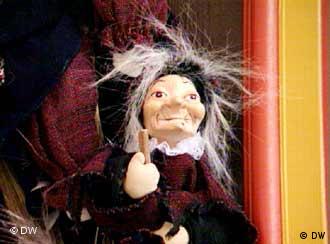 Had a ball last night!

April 30 is probably the spookiest date in the Teutonic calendar.

Snaggle-toothed witches in long pointed hats dance wildly around a fire in the woods, chanting and clapping. Known as Walpurgisnacht, Hexennacht or the Night of the Witches, May Day eve is believed to be the time to ward off evil spirits and banish the winter. 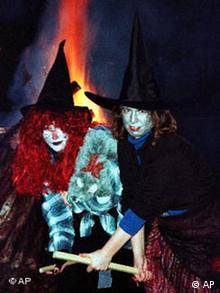 During heathen times it was a festival of major importance and even today it continues to seize the mind and feelings of the Germanic folk.

The mountainous Harz region in central Germany is the birthplace for most of these legends and rituals, which are still enacted yearly on April 30.

The origins of Walpurgisnacht

Walpurgis derives its name from a pagan fertility goddess called Walburga who was worshipped by early Teutonic tribes. Under Catholicism the attributes of the pagan goddess merged with the saint Walburga who lived during the 8th century in Germany. She was the Abbess of Heidenheim near Eichstätt.

Walburga was the patron saint of farmers' wives and maids. She was worshipped for her ability to heal the sick with medicinal herbs. The 1st of May is her feast day. Her connection to the witches' festival is in name only, although many Catholic scholars think she became associated with the sorcerers through her ability to create medicine and potions.

The roots of the heathen Walpurgisnacht or Night of the Witches extend back to a pre-Christian spring festival to drive out the witches.

For centuries people in the Harz region believed that on Walpurgisnacht on April 30 witches would ride on brooms, cats and rams to the Blocksberg. Legend has it, that there on the Brocken, the highest peak of the Harz mountains, the witches gathered to dance and pay homage to the devil, who selected one of them to be his bride.

The mystical festival became well known outside of Germany through Goethe’s use of the theme in his famous play "Faust". In the Walpurgisnacht scene, Mephistopheles takes Faust to the Brocken and has him revel with the witches during their gathering.

Witches once held in high esteem

Until the early middle ages, the Germanic folk greatly respected women who could read and write and create medicine to heal the sick.

But their progressive way of life soon clashed with the teachings of the missionaries and clergy, who believed that women had to be subordinate to men. Soon, the witches were persecuted and burnt at the stake for practicing heresy.

Today, the witches may be long gone, but their legends still live on.

The economy of the Harz region owes much thanks to the witches.

The area lures hordes of tourists with its weird pagan rituals and legends. Since the late 19th century, witch dances have been organised on Walpurgisnacht for the visitors of the Brocken peak. The event remains a lucrative tourist attraction till today, and hotels are booked full.

From year to year the ritual rarely varies.

As dusk falls, the witch dances begin. Dragons, unicorns and werewolves gather along with elves, jesters and musicians to invoke ghosts.

Later in the night a holy bonfire is lit. Wildly deafening drum beats and ghoulish tones resound on the Brocken peak. As the fireworks light up the sky at midnight, the witches begin their journey home.

They disappear wailing loudly to leave the field to the goddess of summer – the May Queen.

The traditional Walpurgisnacht fire is originally believed to have protected people from the feared witches. It was also common to place wreaths and bunches of herbs on doors, and have the sounds of whiplashes and bells tolling throughout the day to keep the spooky witches at arm’s length.

The shops in the Harz region are also full of witch-related paraphernalia – snaggle-toothed puppets riding brooms, ghastly crones crouching on bottles, plates and woodcarvings. Even a potent liquer with the name Witch Ride is available for those who want to remember the revelry long after it's over.

Pumpkins, ghosts, witches and costumes are all big business in Germany.

Find out more information on interesting places to visit in Germany