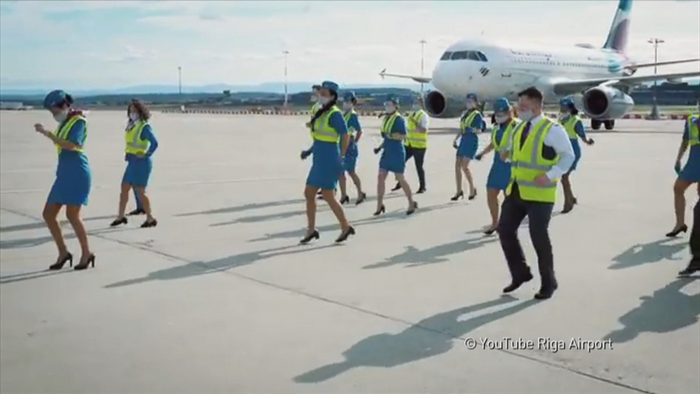 Flight crew choreography, on the tarmac at Riga airport

There haven't been many opportunities to create a sense of community in the past few months, with lockdowns and strict social distancing rules in place. In the coronavirus pandemic, the internet has become a place of refuge to stay connected.

The "Jerusalema Challenge" has been one way in which people have built a sense of togetherness in 2020. People around the world shot videos of them dancing to the song by the South African singer Master KG, which was released at the end of 2019.

In Germany, many groups of people working in essential service jobs — such as police officers, nurses, fire fighters — got into the challenge during this difficult time. Their videos on YouTube have had millions of clicks, and new films are still being added every day.

Now the record company Warner, with which Master KG is under contract, has demanded license fees for the use of the song in the videos.

The dancers had mostly just used the song without asking for their consent or asking about the conditions. According to a report in German news magazine Focus, the Ministry of the Interior of the state of North Rhine-Westphalia has already settled the claims for the participating police departments in the state.

A spokesperson from Warner Germany told DW that private persons would not be fined or need to obtain a license to use "Jerusalema" as part of the challenge in Germany, Austria and Switzerland. But the record company's stance is different if "there is an advertising or image-promoting effect in favor of an institution, organization or company." That is where license negotiations start.

The case has led to outrage online. Open letters are circulating to Warner and the company has been pilloried on social media networks. People are accusing the record company of wanting to fill its pockets from the viral challenge and its good intentions, or nip this good cause in the bud.

Morally, it is debatable whether Warner's approach is appropriate. With all the excitement and criticism, however, one shouldn't lose sight of the legal and solidarity components.

Legally, the matter is clear: "The song is protected by copyright and may not be distributed without consent," Karl-Nikolaus Peifer, professor of civil law with copyright, industrial property rights, new media and business law at the University of Cologne told DW. The author must also be asked before using it in a new context, such as a self-made and published video. Otherwise, there is an infringement of copyright. Master KG in the studio to record Jerusalema

In addition, the unauthorized use must be questioned from the perspective of solidarity: it’s short-sighted to just see a greedy music company behind the case. Musicians are also suffering financially from the pandemic. If a song is used without permission, the artist will lose royalties.

"Our job is to ensure that our artists receive fair compensation for using their music," says Warner.

Alternatively, Warner could have warned the challenge participants and requested the videos to be deleted without charging a fee, explains legal expert Karl-Nikolaus Peifer. The music industry has already lost a lot of revenue to piracy.

"With the attitude that every piece of content on YouTube is an asset," he says, "it is often forgotten that someone has to pay the artists."

Of course, it can be argued that Master KG and his label Warner benefited from the challenge because it contributed to the popularity of the song. Nonetheless, art, especially music and films, is still often interpreted as a self-service shop. Nobody would think of using someone else's car for a video shoot without asking first.