Walk on water, just like Jesus. That's what visitors at the Lake Iseo in northern Italy can do thanks to the latest project by artist Christo. With "The Floating Piers," he fulfilled a lifelong dream.

"We're doing great as long as the sun is shining," says Wolfgang Volz, Christo's photographer and project manager. He then suddenly stops the discussion because the sun is shining just right; he absolutely needs to take another picture of Lake Iseo.

Since 1972, Wolfgang Volz has been the exclusive photographer of the artists Christo and his wife Jeanne-Claude, who died in 2009.

The couple had already developed the concept of "The Floating Piers" in the 70s. They had initially planned to set their installation on the Rio de la Plata in Argentina and in Tokyo Bay in Japan. However, they never obtained permission to carry out their project there. 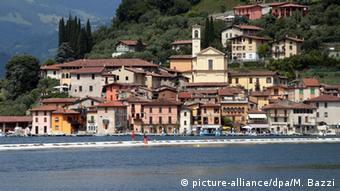 Lake Iseo and the town of Sulzano

'The Floating Piers' defy the weather

The dream could finally become reality on Lake Iseo, in northern Italy between Milan and Venice. The three-kilometer (1.8-mile) long art installation made of floating pontoons connects the islands of Monte Isola and San Paolo with the town of Sulzano.

"It's a bit like being on a waterbed," says Wolfgang Volz to describe the feeling of walking on the swinging webs.

Despite difficult weather conditions, the installation was completed on schedule. "We had three storms in the past month, but they didn't affect the artwork," says Volz.

"The color is Dahlia yellow. This deep yellow fabric is not just one color. It changes color in the morning, looking almost red; by the middle of the day when the sun is up, the fabric is golden," Christo told DW. 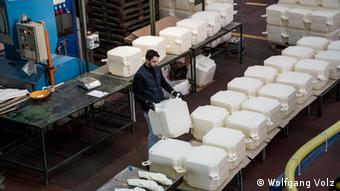 220,000 plastic canisters make up the pontoons

A German company based in Lübeck, called Geo - Die Luftwerker, was commissioned to prepare the fabric - to trim it, sew it and lay it on the piers.

Having worked nearly the whole year on the project, the company's director, Robert Meyknecht, is satisfied with the results - and the fact that they managed to be ready on time: "Towards the end we had to work in shifts from 7 a.m. until 11 p.m.," he says.

He also had to obtain special equipment for the project, such as strong sewing machines for the thick fabric, or an ultrasonic cutter and a laser projector to cut the specific patterns. "For the paths we laid out in the streets of Sulzano, each part had a different shape," he explains.

Everything was precisely measured ahead of the installation: "We had also cut out the spaces occupied by benches or trash cans," Meyknecht says.

Meanwhile, the municipality decided to spruce up the city before the event, and installed new benches that were slightly larger than the older ones. "We had to adjust everything on site," the specialist explains. He brought two portable sewing machines with him, along with 18 special machines needed to sew the individual panels onto the pontoons.

Now Robert Meyknecht, whose business is actually specialized in producing hot air balloons, is happy that everything worked out in the end: "It was an experience that made us really proud."

The work on the pontoons was not easy for Meyknecht's team: "The movement created by the waves was stronger than I expected," he explains. He was particularly impressed by the waves during the storm, as they were breaking a meter above a 16-meter-high footbridge.

"Christo was standing there and was as excited as a young kid," Meyknecht remembers.

Christo loves rough nature. His environmental works of art are, just like those who view them, exposed to wind, sun or rain: That's what brings the artworks to life.

"This is not a picture, a film or a television, this is reality," Christo told DW.

The fabric that he extends over or wraps around objects symbolizes the temporary nature of ephemeral art.

The installation "The Floating Piers," which cost Christo around 13 million euros (over $14 million), is no exception in this matter: It will be on display for 16 days only. 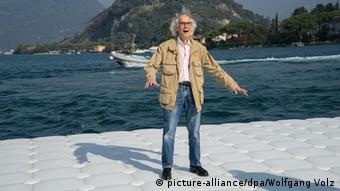 Christo enjoying the movement of water under his feet

The Bulgarian-born artist finances his art without sponsors or public grants. Instead, he sells his sketches and photos of the installations. "I come from a Communist country and I am absolutely against propaganda," Christo has repeatedly said.

He's skeptical of all types of propaganda, whether political, ecological or religious: "No one can use this work to advertise, because it is based on total freedom," Christo says. He even admits that it is completely useless: "Nobody needs this project. Only I, Jeanne-Claude and a few friends wanted to have it. This is pure art."

Actually, Christo and his friends weren't the only ones to want it. Mayor Fiorello Turla also welcomes the international attention on his city, as some 800,000 visitors are expected over the next two weeks. For them, freedom will be more than just a concept when they walk on the floating installation and, like Christo, simply have fun.

Twenty years ago, the historic building in Berlin which now houses the Bundestag was transformed for two weeks. As a new exhibition shows, the event was a strong symbol for the reinvention of the city. (26.11.2015)

Christo's 'The Floating Piers' in pictures

Celebrated late artistic duo Christo and Jeanne-Claude had first planned to wrap the Parisian landmark 60 years ago. Now, the project has finally been realized.