The embattled carmaker's new chief has pledged to clean up Winterkorn's mess and restore VW's image. But doing so will not be easy and will require an 'unrelenting and thorough investigation,' he warns. 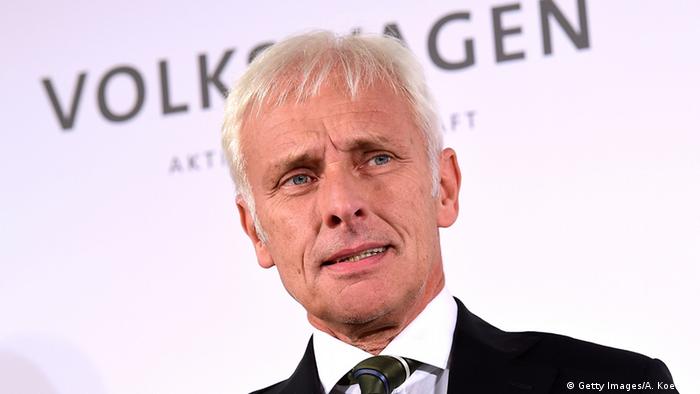 Volkswagen's newly appointed CEO, Matthias Müller, on Monday told senior management to buckle up and brace for a bumpy road ahead.

In his first official address to the embattled car giant's top brass since taking over the reins in Wolfsburg, Müller said VW was facing the "biggest test" in its nearly 80-year history.

"It's about winning back lost trust," Müller said, according to a statement released by the Group. Doing so would require an "unrelenting and thorough investigation," he stressed.

The 62-year-old has his work cut out for him. He left a cozy job as head of luxury sports car maker Porsche for what may be one of the hardest jobs in the industry right now. He's taken on the daunting task of trying to repair the damage to the iconic company's image, which was all but totalled under his under his predecessor Martin Winterkorn's watch.

Cleaning up the mess

Winterkorn was forced to resign last Wednesday, five days after it was revealed that Volkswagen had flagrantly cheated on US emissions test. The world's best-selling carmaker is believed to have equipped as many as 11 million diesel vehicles worldwide with so-called "defeat device" software, which made them appear more environment-friendly.

The software recognized when a vehicle was being tested and reduced the amount of nitrogen oxide emitted, although under road conditions the cars belched out up to 40 times as much of the ozone-causing substance as US law allows.

Müller, however, said he expected the actual number of affected cars to be much lower, since the software had not been activated in all 11 million vehicles.

Still, he condemned those responsible for their "unfathomable misconduct," adding that the deception and manipulation could not be justified. VW, he said, must learn from its mistakes, which would also mean changing its corporate culture.

The CEO also said that the unhappy owners of the tampered diesel cars could expect to hear from VW within the coming days. The company has said it plans to begin repairs as soon as regulators have signed off on the company's proposed technical fix.

Müller's stern statement came as the prosecutor's office in the city of Braunschweig announced it was opening an investigation into his predecessor's role in the scandal. The prosecutors said the probe would focus on "allegations of fraud in the sale of cars with manipulated emissions data."

"The aim of the investigation is to clarify the chain of responsibility," the office added.

The presidium of VW's supervisory board last week announced it would itself file charges against persons unknown over "obvious irregularities" with regard to diesel engine pollution tests. Board members said they would fully support investigators in their work.

Shares in Volkswagen continued their downward slide on Monday, shedding 7.5 percent as the scandal over rigged pollution tests showed no sign of abating.

Audi said Monday that 2.1 million of its cars worldwide were fitted with the so-called defeat devices that allowed parent company VW to thwart emissions tests in the US.

Citing sources familiar with the matter, Reuters reported Monday that Volkswagen had suspended the R&D chiefs of its core brand (VW), luxury division Audi and sports-car maker Porsche until the scandal was fully cleared up.

German authorities heaped pressure on the embattled carmaker, demanding it set out a timeline by October 7 as to how it would ensure its diesel cars met national emissions standards without using the cheat technology.