The volcano in southern Iceland began spewing an ash plume on April 14. A week later, Deutsche Welle asked Dr. Hazel Rymer, a volcanologist at the UK's Open University, about Eyjafjallajokull's effect on the environment. 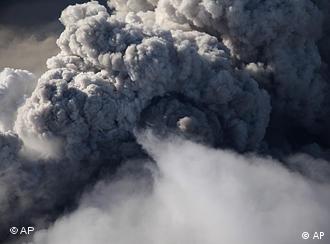 Deutsche Welle: What do we know of the environmental impacts of the eruption?

Dr. Hazel Rymer: Very little is known so far about the environmental impacts. Of course, we know what sort of impact we believe we've had with previous eruptions - and it's very difficult, really, to make direct comparisons between previous eruptions and the ongoing eruption. So what we know is, there's a lot of ash coming out of this volcano. What we don't yet know is very much about the precise chemistry of that, and certainly not about the chemistry of the material that is landing over Europe. There are samples being collected now and analyses being run.

But it is fair to say that the concentration of the plume, by the time it gets to Europe, doesn't seem to be very large, and so the environmental impacts are going to be minimal.

Given that you've been studying volcanoes for decades, what's the extent of the impact likely to be for a volcano of this size?

For a volcano of this size, the environmental impact is going to be limited geographically and quite small. There are, of course, "super-eruptions," which are orders of magnitude larger in terms of the amount of material they erupt, and those volcanoes luckily don't happen very often, but when they do every few million years, then the effects can be devastating.

Of course, you get slightly smaller eruptions than that happening more regularly, but this eruption that's happening right now, of course locally within Iceland, the effects are very devastating. There are considerable amounts of flooding and ash fallout. Further afield, over in Europe, the effects of course have been devastating in terms of aviation and transport and so on, but in terms of health effects and so on, we aren't seeing significant problems at the moment.

Very close to the volcano, there are all sorts of rather nasty things happening. Of course, you have the ash being exploded upwards, and an awful lot of it lands quite close by. So if it lands on top of roofs, for example, and they're not pitched roofs, then you can have problems of roof collapse. Of course, if it lands on pasture land, then that's very difficult for the animals trying to eat the grass, and in fact, it can be contaminated and cause major problems. So there are a lot of problems locally - that's just from the ash. The ice melt has been a very major problem because it has caused flooding, and some of the rivers have risen several meters, and bridges and roads have been taken out by the floods. So locally, it's been very devastating.

From flooding to ash fallout, Eyjafjallajokull's impact within Iceland was devastating

However, this particular eruption didn't actually come as a surprise, given that there was a smaller eruption some weeks ago. Scientists from your university, as well, had predicted a much larger eruption.

Well the eruption did begin several weeks ago - it was a lava flow at the time. Part of this is because the site of the eruption actually changed. It began in a region between the two ice caps and formed very beautiful lava flows. In fact, a lot of tourists went to go and have a look at it. What has happened more recently is that the source of the eruption has migrated and is now underneath the ice cap. And that's been the problem; it's the interaction of the new magma that's been erupted by the volcano with the ice - that interaction is explosive. The ice melts, then you have water, and that reacting with brand new erupting lava is explosive, and that is what has caused the ash. The work that has been done by people here and elsewhere looking at previous eruptions of these volcanoes suggests that there is sometimes a link between activity at this particular volcano and Katla volcano, which is just over to the east of this one. At the moment, though, there is no evidence that Katla has been reactivated. Of course, our colleagues in Iceland are monitoring the situation very closely.

And what can be expected if that were to happen any time soon?

If that were to happen, and I must stress that we don't yet have evidence that this is the case, then Katla is a volcano that tends to erupt much more explosively than the present eruption. This is because beneath Katla volcano, there is a large reservoir of magma that would erupt if there were a reactivation. If the new magma that is coming up under Eyjafjallajokull at the moment, if that were to migrate towards Katla, it would erupt in a much more explosive and devastating way than we have seen at the moment. But I must stress that we have no evidence at the moment that Katla is reawakening.

We're hearing that when really huge eruptions, or "super-eruptions," happen, then there is enough material coming out of the volcano to cool the planet. We're told that's not likely to happen in this case - do you agree with that?

The size of the eruption is not large enough, at the moment. Orders of magnitude more material erupted during a super-eruption, and usually with more energy as well, so it goes up higher and therefore stays up in the atmosphere a lot longer. One of the reasons that we had air traffic disturbances over the last week is that the ash plume from this volcano was thrown up as high as 11 kilometers, but most of it was a lot lower than that. In a super-eruption, you would have a much higher percentage going up above 10 kilometers well into the air traffic lanes, obviously causing air traffic problems. But then being able to be transported right around the globe. It's not been a powerful enough eruption and the volume of material has not been big enough to cause these massive global effects of a super-eruption.

You mentioned air traffic disruption - there's been a big focus on this subject recently. One of the things that experts have been saying is that it has brought down the amount of man-made CO2 emissions thanks to the grounding of so many flights. But that's really a temporary respite, isn't it? It is not really likely to have a huge environmental impact in the long term.

That's right. It's a very small effect. Of course, within Europe, we tend to think that because all the planes have been grounded, whether that's a good or bad thing. But of course, the rest of the world has still been flying throughout this whole episode. There have been some CO2 reductions, of course, during this period, but I wouldn't say it's significant on a global scale.

And we're hearing of estimates like 150,000 to 300,000 tons daily emissions coming out of the volcano itself. What kind of long-term impact is that likely to have, given that the emissions are likely to stay in the atmosphere for a long time?

Well, the thing about volcanoes is that they do erupt sporadically. So if this were a constant flux going up into the atmosphere, obviously that would be a very big problem. But it's likely that it's going to be doing this sort of thing for days or perhaps weeks. This is just a measurement that's been made; it's not saying that this is the average coming out of the volcano all of the time. If it were doing that all of the time, of course it would have very large global effects. If you add up the effects of all of the volcanoes across all of the world, they do certainly put out huge amounts of CO2, SO2 and several other gases. 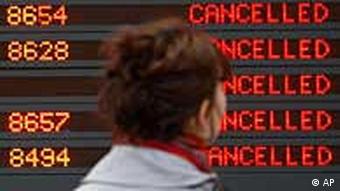 Among the toxic gases emitted by volcanoes is sulfur dioxide, which can cause serious environmental problems because it can be converted into sulfuric acid, which can then result in acid rain. We're hearing that's not likely to happen in the case of the Icelandic volcano.

Yes. There's still a lot of work to be done to be absolutely certain as to what the percentage of the various gases are that are coming out during this eruption. As far as I know, it's not particularly high in these gases, and sulfur dioxide isn't a major problem at this particular eruption. What does happen if you do get a large amount of sulfur dioxide being ejected high into the atmosphere from the volcano is it eventually forms sulfuric acid aerosol, combining with the water in the atmosphere, and then that falls down as acid rain. It doesn't look as though that's going to be a measurable problem across Europe.

A massive cloud of ash from the Icelandic volcano Eyjafjallajokull has affected air travel in Europe. Readers have sent in their experiences and comments. (19.04.2010)

Air travel almost back to normal after ash-cloud disruption

Flight schedules have returned to normal, after six days of travel disruption caused by a cloud of ash from an Icelandic volcano. However some passengers could continue to experience delays. (22.04.2010)

Volcanic ash is too hot to handle: insurers

Ouch. Airlines aren't insured against business interruptions such as those caused by the cloud of volcanic ash from Iceland, which has grounded aircraft in Europe and resulted in huge financial losses. (19.04.2010)