The lesson of CES 2017: Like smartphones in the past decade, virtual reality (VR) technology will change everyday human experience in the coming decade. It's a hugely engaging, irresistible, and disruptive technology. 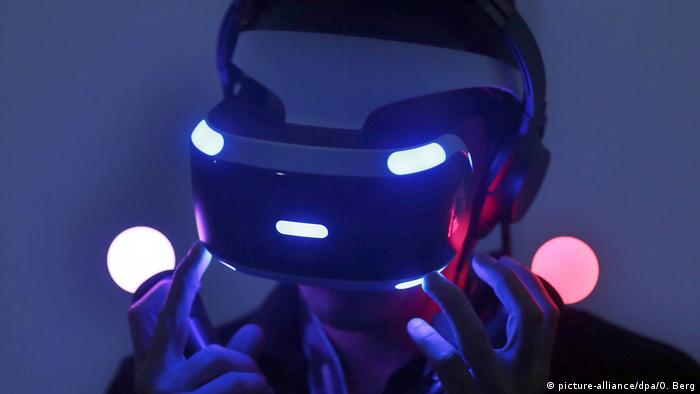 The annual Consumer Electronics Show (CES) trade fair held at Las Vegas turns 50 this year. It's the mega-extravaganza of the tech world - the place where the people who are inventing the future go to show off the dazzling new toys they've been working on.

With more than 800 first-time exhibitors showing wares in 33 major categories from  "Accessories - Audio Accessories" to "Wireless Services," CES is so big that no one can get their head around the whole thing - just like no one can really grasp how fast and hard incoming new technology will change everyday life in the coming decade.

Augmented & Virtual Reality (AR/VR) is among those 33 CES technology categories, with 261 exhibitors -  the largest showcase of AR/VR technology ever. A related category is Gaming, with 388 exhibitors.

There's good reason to think AR/VR is among the technologies that will most profoundly change day-to-day lived experience in the years ahead - and the addictive nature of ever-improving VR games is only one of several reasons for that. 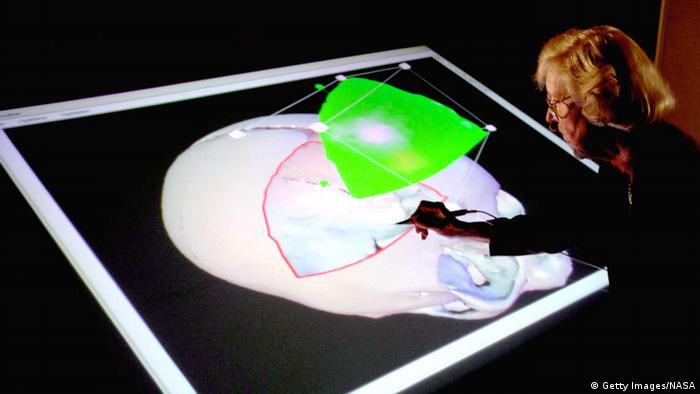 A 'software scalpel' in use by a physician working on an image of a patient's head on an 'immersive virtual reality workbench' at NASA Ames Research Center, Moffett Field, California. The medical applications of VR and AR (augmented reality) are growing fast, and already include remote diagnostics and telesurgery as well as medical education

AR/VR aren't stand-alone technologies that can be separated from other domains. The reality is that AR/VR will increasingly overlap with a lengthening list of other CES categories, like Health and Biotech, Robotics, Video, Wearables, or Vehicle Technologies.

What is becoming clear is that in future, daily human experience will increasingly integrate AR and VR, just like it already integrates smartphone applications.

AR/VR will be driven by exponential increases in the power of artificial intelligence computing, combined with ever larger data transmission speeds, greater ubiquity of ever cheaper, more sophisticated sensors, and ever-improving user interfaces - not just visual interfaces, but also auditory and haptic (touch) interfaces. There is no obvious upper limit to the potential for further improvement in these underlying technologies, and so there isn't any discernible limit to how powerful AR and VR can get, either. That's worth stopping and thinking about for a minute. 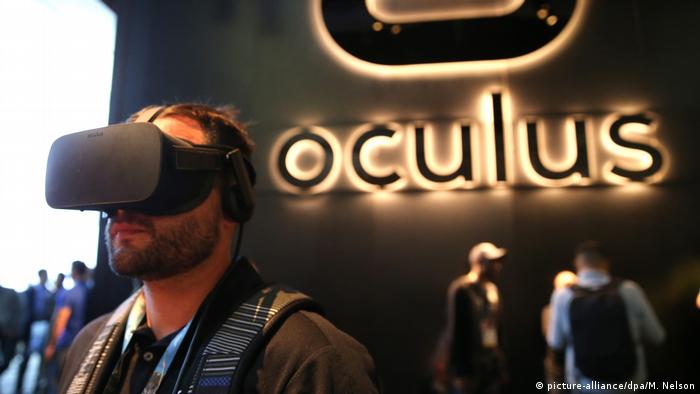 In March 2014, Facebook took over Oculus VR, a company founded in June 2012 in Irvine, California. Facebook paid $2 billion in cash and stock for Oculus VR, which is the maker of the Oculus Rift virtual reality headset, designed for video gaming. In 2015, Oculus acquired Surreal Vision, a British startup focused on 3D reconstruction, mixed reality, and telepresence. Oculus also has a cooperation deal with Samsung to develop Samsung-branded VR gear.

Every facet of perception will be affected
While many people still think of VR primarily as the technology underlying the next big leap in immersive gaming, with technologies like Facebook's Oculus Rift gamesets hitting markets, that's only one aspect of what emerging AR and VR technology will enable.

"Virtual reality is changing the game for a variety of industries including health care, agriculture, manufacturing and business," said Gary Shapiro, president of the Consumer Technology Association, which organizes CES, in a Reddit chat. "Doctors are using VR to enhance traditional therapies, architects use VR to design stronger buildings and travel agencies are using it to simplify vacation planning."

One CES panel discussion will examine how virtual reality is transforming television, movies, and even news with immersive forms of video. AR/VR will also play a huge role in transforming education - for example, imagine a medical student being able to interactively navigate through a 3D model of a living human body, and observe in sped-up time how age- or pathogen-related diseases change organ functions. 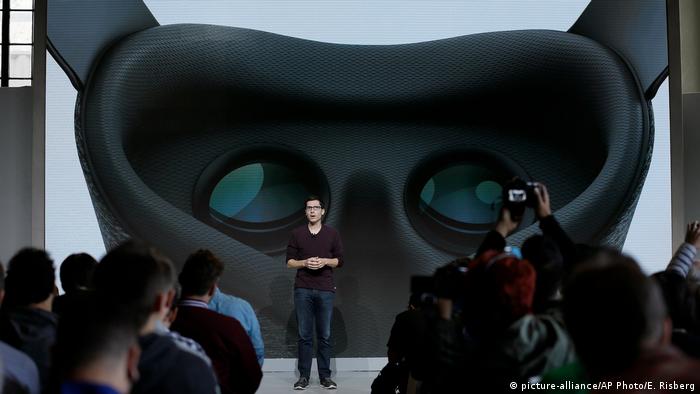 Or a history class could sit and listen to a speech by Roman orator Cicero, in an interactive VR model of the Roman Senate - simultaneously translated from Latin into English. And using AR, visitors to Rome will be able to see the ancient city overlaid onto the modern city using AR-equipped glasses, with virtual tour guides explaining whatever they want to know as the tourist wanders through town.

Cars will feature virtual reality displays to provide a better sense of the environment around them. AR and VR tech will also be built into smart eyeglasses, telemedicine apps, wardrobe and beauty makeover apps.

Robin Raskin, who heads the Living in Digital Times center of the show, said augmented reality was already catching on for retail applications, with try-it-on-and-see beauty apps and in-store virtual mirrors. Augmented reality, she said, "lets us look at the real world and add valuable, entertaining and immersive information to it." 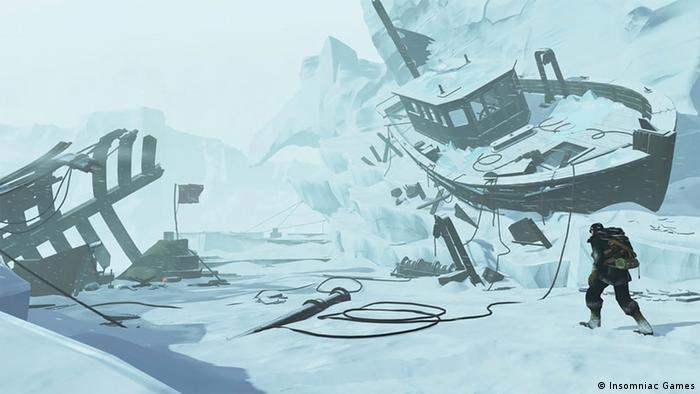 A scene from the VR game 'Edge of Nowhere,' by Insomniac Games, about a shipwrecked expedition crew trekking across the mountains of Antarctica, complete with alien-inhabited caves. Competitive pressures will make 3D interactive VR games ever more compelling and addictive

AR will take "try before you buy" to a whole new level. If you have a digitized model of your physical dimensions, you'll be able to try on clothes or shoes from online catalogs virtually before you buy them, to see how they look - and order custom-made apparel and footwear that will fit you just right.

Analyst Jack Gold at J. Gold Associates said that despite the potential benefits of virtual and augmented reality in business or industry, "gaming is where it is going to take off first," because that's where people are spending money. In regards to non-gaming uses, "the issue is not whether [AR] has the potential to transform things, but whether you can put it into a space where consumers can afford it," Gold said.

An example of a gaming application that crosses genres, mixing the physical and virtual, is "Drone n Base," an indoor game from Anima Technika SRO, a Slovakian company. It allows drones to be flown in multi-player air-races and dogfights. "A palm-sized drone weighs only several dozen grams, is safe, and extremely shockproof," the company said in its entry on the CES website. "They contain an infrared cannon which can shoot down an enemy drone."

But some analysts worry that VR gaming will draw gamers ever further into a suite of illusory worlds, where they'll come to identify more with their VR avatars than with their daily lives. Millions may largely withdraw from their drab, unheroic meat-puppet lives, and instead go live mostly in imaginary VR game worlds, where they can be heroes. Television and gaming have already shown us how addictive media can be, leaving little real social interaction with other people in the physical world, and little physical exercise. That's likely to get a good deal more extreme as interactive VR fantasy worlds get ever more compelling.

At the 2014 New Establishment Summit, entrepreneur Elon Musk, founder of SpaceX and Tesla Motors, said of VR technology: "It's quite transformative. You really feel like you're there, and then when you come out of it, it feels like reality isn't real... I think we'll see less physical movement in the future, as a result of the virtual-reality stuff."

Musk added that as VR gets more realistic and incorporates technologies like haptic suits, VR "becomes, beyond a certain resolution, indistinguishable from reality."

(With material from AFP)