Brazilian police say they have detained some 90 people in violent protests in the country's largest city, Sao Paulo. The demonstrations come after police shot dead a teenager in a confrontation on the weekend. 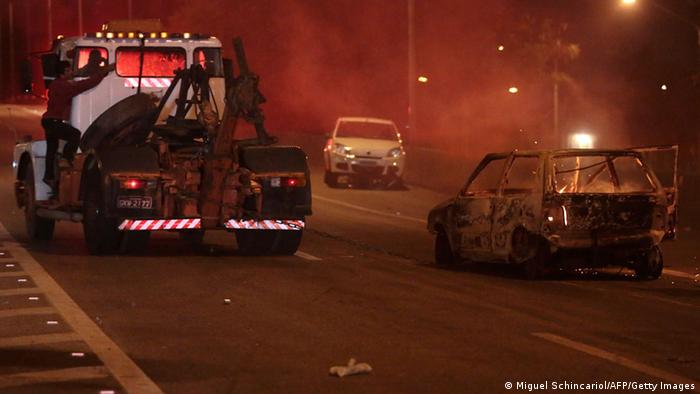 Police fired tear gas to quell the demonstration, which started as a peaceful march calling for free public transport for students. A police statement said some of the rioters used firearms during the violence.

Indigenous Brazilians clamor to be heard ahead of soccer World Cup

Indigenous squatters have occupied the Museum of the Indian in Rio de Janeiro to make their voices heard amid preparations for the soccer World Cup. Asurini Indian Ivandro says it's a reaction to centuries of oppression. (23.10.2013)

The protesters also reportedly burnt at least five commuter buses and three tractor-trailer trucks during the violence, which erupted late on Monday. Police said some groups looted shops and a major highway leading out of the city was blocked.

The protests broke out in response to the police shooting of a 17-year-old youth on Sunday.

Police say the teenager, Douglas Rodrigues, was fatally wounded when a policeman called to check on a disturbance in the northern neighborhood of Vila Medeiros accidentally discharged his weapon. Rodrigues died later in hospital of his wounds.

The city of 20 million has recently seen a series of mass demonstrations, with more than a million people taking to the streets in June to protest about poor social services, corruption and the millions being spent on high-profile sporting events.