Police and protesters have clashed in a Rio de Janeiro slum, amid public anger over the death of a young man who regularly appeared on the country's largest TV network, Globo. Protesters blame police for the death. 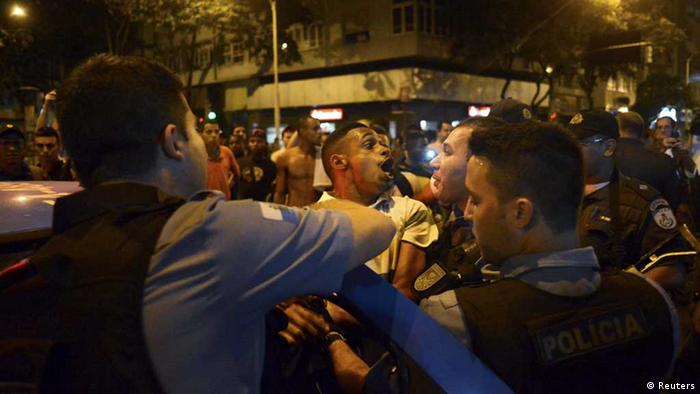 Violent protests broke out in Rio de Janeiro on Tuesday after the body of a 25-year-old man, Douglas Rafael da Silva Pereira, was found in the Pavao-Pavaozinho favela near the Copacabana beach.

Douglas was well known, as a regular dancer on a television show on the Globo network.

Initial reports over the circumstances around his death were conflicting, but Brazilian media quoted police sources as saying he was killed after being mistaken for a drug trafficker.

The police issued a brief statement to the AFP news agency saying only that the case was "under investigation" and that Douglas' injuries were "compatible with a death caused by a fall."

AFP reported that a 30-year-old man was shot dead in Tuesday's unrest, several other reports said that gunfire was audible in the area. AFP also cited one resident as saying that power had been cut and that residents had been told to stay in their homes.

The Pavao-Pavaozinho slum is just a few hundred meters from the Copacabana beach. The Globo "Jornal" account on Twitter posted a picture of Tuesday's protests captioned simply "Demonstration of residents of Pavao-Pavaozinho on Copacabana."

Residents of the slum, one of 37 to be subjected to a police "pacification" program - designed to make the areas safer ahead of the World Cup and the 2016 Olympics in Rio - blamed police for Douglas' death. Many of the favelas used to be practically no-go areas for security officers, as the slums were controlled by drug gangs. Violence against police in these areas has intensified in recent weeks, with the authorities warning that several gangs were seeking to reestablish the territory for themselves.

The police operationsin the region have prompted some public dissatisfaction, with allegations of heavy-handed tactics and civilian deaths as a result.

Pavao-Pavaozinho is also around 6 kilometers (3.7 miles) from Rio's fabled Maracana stadium, where July's World Cup final will be played.