Violence Continues in Greece After Vigil Over Boy′s Death | Europe| News and current affairs from around the continent | DW | 14.12.2008

Violence Continues in Greece After Vigil Over Boy's Death

Hooded youths hurled firebombs at the environment ministry, banks and businesses in attacks across Athens in the early hours of Sunday, Dec. 14, after civil unrest triggered by the shooting of a teenage boy by police. 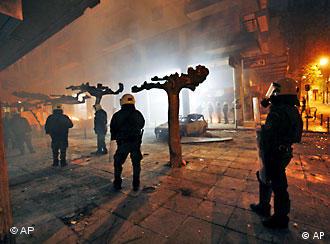 The violence has continued for eight days straight

Violence reignited in Athens for an eighth day, with protestors firebombing a police station just moments after a peaceful vigil held in honor of a teenage boy killed in a police shooting.

The latest unrest followed a candlelit vigil in front of parliament marking a week since 15-year-old Alexandros Grigoropoulos was shot dead by police on Dec. 6 in the Exarchia district of central Athens.

Police used tear gas late Saturday on some 100 hooded youths who firebombed the station near Athen's Exarchia district where Grigoropoulos was shot.

Earlier Saturday evening, youths rampaged in the northern city of Thessaloniki, vandalizing a gymnasium and causing extensive damage to businesses. 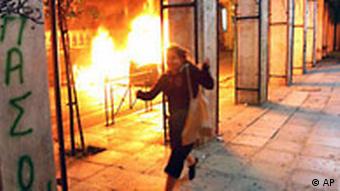 Riots this week were the worst Greece has seen in decades

The riots have been Greece's worst in decades, destroying hundreds of shops, banks, buildings and cars in more than eight cities including the capital Athens and the port cities of Thessaloniki and Patras.

Gangs of youths and self-styled anarchists have been smashing windows, looting shops and setting up flaming barricades in streets across the country.

Though the violence is tied to the shooting of Grigoropoulos, students have also been protesting economic and education reforms. Unemployment rates are particularly high among the 15 to 24-year-old age group and economic malaise is strong.

The protests have united both mainstream and radical youths and the opposition Socialists have seized the opportunity to press for fresh elections. 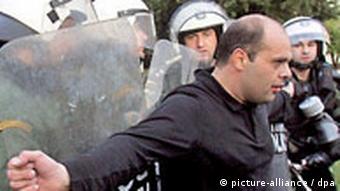 Not all protests in Greece were violent

"At this time the country faces a serious financial crisis … a steady hand on the helm is needed to deal with it," he said from an EU summit in Brussels.

In contrast to the week of violence, thousands gathered in peaceful demonstrations Saturday across Greece, with hundreds of candles illuminating in a peaceful sit-down demonstration in Synatagma Square outside the Greek Parliament.

The city center appeared to return to normal, with shops open and cafes filled with customers.

City workers even began decorating the main Syntagma Square for the upcoming holidays, after a massive tree and Christmas village were damaged and torched by rioters.

The police officer who shot Grigoropoulos has said the boy was killed by accident when the bullet ricocheted and hit him. A final ballistics report has not yet been released.

Hooded youths firebombed banks and businesses in pre-dawn attacks across Athens Saturday, Dec. 13, in the eighth day of civil unrest triggered by the police shooting of a 15-year-old boy. (13.12.2008)

A long-planned general strike by Greece's two largest unions could not come at a worse time for the country's embattled conservative government as students continued to riot in the streets. (10.12.2008)

Anarchy Appears to Have Taken Over, DW Correspondent Says