The liberal FDP is the only political force in Germany opposed to a minimum wage. But, now that the pro-business party has crashed out of parliament, the path has been cleared for the controversial policy tool. 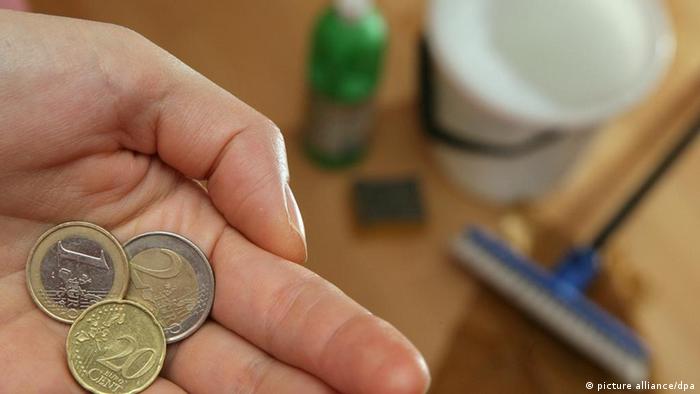 European answers to the question of how high a wage must be to earn a living vary widely. While workers in Hungary, Slovakia, Lithuania and Latvia earn just about two euros an hour as a minimum wage, the amount is 9 euros in France and Belgium, and almost 11 euros in Luxembourg.

In Germany, minimum wages exist only in a handful of sectors in which labor unions have been strong enough to forge an agreement with employers, but there is no national, blanket minimum wage.

German Chancellor Angela Merkel, however, recently voiced her concern about people working full-time and still needing to apply for welfare benefits to make ends meet. At a conference of the German Employers Federation (BDI) in June she told the assembled German business elite that she didn't think this was right.

Merkel's conservative CDU/CSU alliance has long been skeptical about introducing a blanket minimum wage across Germany. The conservatives have preferred minimum wages tailored to the needs of different sectors of the economy. However, even this foundered over opposition from their junior coalition partner, the pro-business Free Democratic Party (FDP), during the past four years of their joint government. 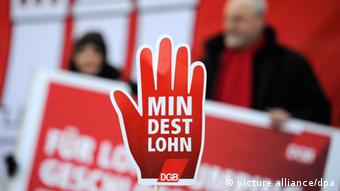 Now that the FDP has been voted out of both the government and parliament, the minimum wage issue is back on the agenda. The opposition Social Democrats (SPD) and the Green Party both are demanding 8.50 euros ($11.40) an hour, while the Left Party even wants a minimum hourly wage of 10 euros.

However, the idea of introducing a blanket minimum wage is a controversial topic even among academics and economists. Differentiation is the buzz word in the debate, said Karl Brenke, a senior economist and labor market expert with the German Institute for Economic Research (DIW).

“In Britain, minimum wages are related to age and qualification, while in the United States you have different wages in different regions,” he told DW.

Brenke and Kai-Uwe Müller are co-authors of an international study comparing minimum wages. According to their findings, about 5.6 million Germans would stand to profit from a minimum wage of 8 euros 50 – most of them living in economically less-developed eastern Germany.

At first glance, the positive effects of a minimum wage prevailed in the debate, said Müller, adding that “a minimum wage would affect the distribution of income and balance wage inequalities in the low-wage sectors of the economy.”

Regarding income distribution, however, the effects would turn negative if a minimum wage were to lead to a reduction in employment in general, Müller told DW.

Does Germany need a minimum wage?

As far as the total German wage sum was concerned, a minimum wage would, of course, increase the volume, the two economists said. However, the rise by an estimated 3 percent wasn't high enough to boost Germans' average purchasing power significantly. Both Benke and Müller also questioned whether poverty and income inequality in Germany would be reduced substantially.

Moreover, average household income was less likely to rise at all, they added. This was because a majority of low-wage earners in Germany were working on a tax-free and part-time basis, with many of them just adding to the wage of a better paid husband or wife.

An increase in their combined household income would mean higher income taxes, and subsequently the same or even less disposable income, the two economists claimed.

In addition, many poor families sought welfare payments not because their wages were too low, but because their combined income wasn't enough to cover the costs of a higher number of household members.

In their study, DIW economists Brenke and Müller also shed light on how a minimum wage would affect German businesses. They found that especially smaller firms employing fewer than four workers would be worst affected by a minimum wage. 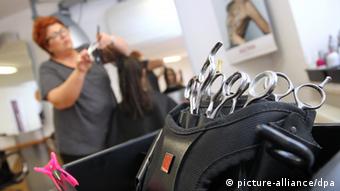 The effects of a recent 8.50 euro minimum wage introduced for hairdressers have yet to emerge

Notably in the services sector, such as restaurants, bakeries and call centers, a minimum wage of 8.50 euros would increase a small firms' total wage costs by up to 20 percent. This was too much of a rise to ensure a smaller company's survival, the economists said.

They instead have called for a lower minimum wage level of about 7 euros for a start, which after an introductory phase could gradually rise over time.

On balance, the two economists reached the conclusion that a minimum wage for Germany would come at a price.

“No matter whether its lower employment, higher consumer prices or lower business profits, someone is going to pay the price,” Kai-Uwe Müller told DW.

Therefore, the current minimum wage debate in Germany, suggesting a win-win situation for all, was somewhat misleading, he said.