A new middle class emerged for the first time in Vietnam in the 1990s. It has won a few freedoms, but remains fragile. Now, the global economic crisis threatens to undo the achievements. 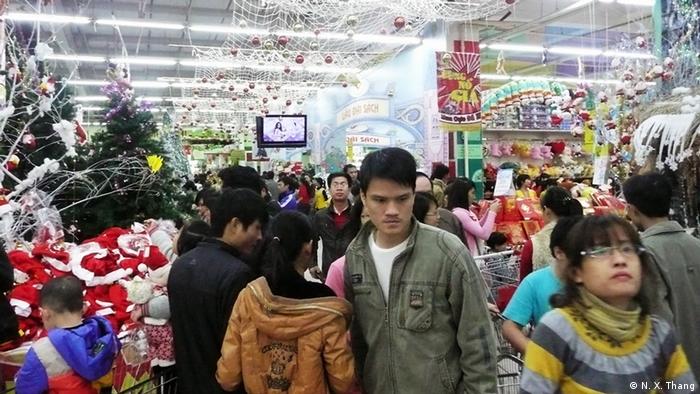 "Sunday is the only day the whole family can be together and do something," says Tuyen. "I work 50 hours a week, and then there is the three-hour commute every day. So there is not much time. At the supermarket, children can play and parents can take care of some shopping." 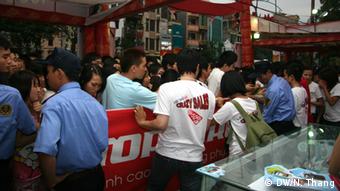 Supermarkets are a big draw for Vietnam's middle class

The first supermarkets in Vietnam were so exclusive that only the rich could afford to shop there. Today, things are different because the government launched a reform program in 1986 under the motto "Doi Moi," or renewal.

Instead of the centrally-planned commando economy, the government moved toward an economic model that offered people more freedoms and latitude. And with those freedoms, the country grew more affluent. "A middle class developed in the course of this reform process," Gerhard Will, an expert on Vietnam from the German Institute for International and Security Affairs (SWP), told DW.

The Nguyens belong to the first generation to benefit from these reforms. Both were born at the end of the 1970s and achieved a degree of economic success through the boom years around the turn of the millennium that their parents would have never even dreamed of.

The older generation is suspicious of the country's economic development. When Tuyen comes home with a new kitchen gadget or toy for Mai Chi, his parents and grandparents are skeptical, asking whether it was really necessary, or whether it wouldn't be better to save the money for bad times.

And perhaps the older generation isn't wrong. As a consequence of the 2007 global economic downturn, Vietnam's economic prospects have dimmed. Economist Adam Fforde, from the University of Victoria in Melbourne, Australia, left no doubts in an interview with DW. "The economic crisis in Vietnam is serious," he said. 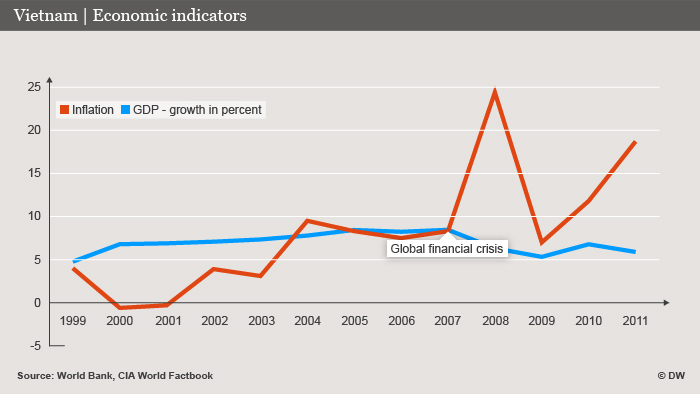 Toxic combination: Inflation is high and economic output is slipping

Inflation - at 7 percent in October 2012 - was shrinking incomes, Fforde stressed. Property values have dropped, so that many families are paying off loans that are worth more than their homes, he added, while the costs for education and health were rising.

"The expenditures, which in some cases are enormous, are not worth the money," says Vietnam expert Will, pointing out that the education system needed to be reformed and the health system was corrupt. Academic degrees are more often bought and sold, or lent to party loyalists, than actually earned, he noted. “It costs a lot of money just for a band-aid or a vaccination,” he said.

The ups and downs of Vietnam's economy hit the emerging middle class the hardest. The last few years threaten to reverse the achievements of the past. The middle class is crumbling before it could really establish itself. "The middle class has experienced considerable restrictions at the economic and political level," says Will.

Despite the dismal outlook, there have been no protests worth mentioning. "No opposition will come from the middle class. There is just too little self-confidence within the group about its own strength," notes Will. "People are afraid they could lose everything they have worked so hard for over the years if there was upheaval or sweeping change," he says. The future used to be worse

What's more, since the crisis began, the government has grown extremely nervous and is clamping down on regime critics. "The guilty verdicts against bloggers are a signal to the others," notes Will. In October, the popular blogger Dieu Cay was sentenced to 12 years in prison.

A day after his DW interview, Tuyen sent a text message. He was at work and his daughter in kindergarten: "Times are more difficult than before the big crisis. Maybe Vietnam has bigger problems than the western countries, but compared to the situation 20 or 30 years ago, we are still doing well."

An anti-China protest has ended in chaos in Vietnam, with a score of demonstrators being detained. The public display of frustration is in response to a confrontation between Hanoi and Beijing in the South China Sea. (09.12.2012)

Study reveals Asia's winners and losers in rule of law

Weak civil society and rule of law can blight lives, particularly for those who most need the protection of the state. A comprehensive new report reveals wide disparities, with parts of Asia faring quite poorly. (04.12.2012)

Vietnam: A workshop with "Distinction"

In July, journalists from the Vietnamese broadcaster Voice of Vietnam produced a new radio magazine program during a three-week DW Akademie workshop. The program's focus: environmental protection and conservation. (07.11.2012)