An anti-China protest has ended in chaos in Vietnam, with a score of demonstrators being detained. The public display of frustration is in response to a confrontation between Hanoi and Beijing in the South China Sea. 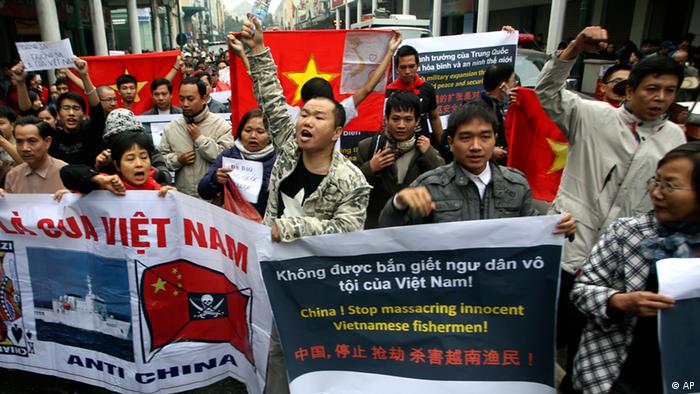 Vietnamese police broke up anti-China protests in its two main cities and detained around 20 protesters Sunday, according to witnesses, as Beijing and Hanoi continue to spar over the South China Sea.

Around 200 protesters made for the Chinese embassy in the capital, Hanoi, during what was the city's fifth anti-China demonstration this year. They were stopped by security forces. Roughly 20 were then put onto a bus and transported to Loc Ha detention center on the city's outskirts.

The protests follow a spike in diplomatic tensions between Vietnam and China last week, when the former, which has started oil exploration in waters it claims, accused Chinese fishing vessels of cutting the cable of a Vietnamese survey boat at sea. Beijing denied the allegations and called on Hanoi to cease its oil exploration activities and leave Chinese boats alone.

One man at the demonstration said the action was "one more example of Chinese aggression against our country."

China has claimed ownership of roughly 90 percent of the South China Sea, which covers around 3.5 million square kilometers. But Vietnam, along with Malaysia, the Philippines, Taiwan and Brunei also have various claims. The sea territory is highly prized for its rich resources, and for straddling key regional shipping lanes.