Heavy flooding and landslides have hit central Vietnam for more than a week. Rescue workers faced a dangerous situation, after 13 of them died trying to reach those trapped in the mud. 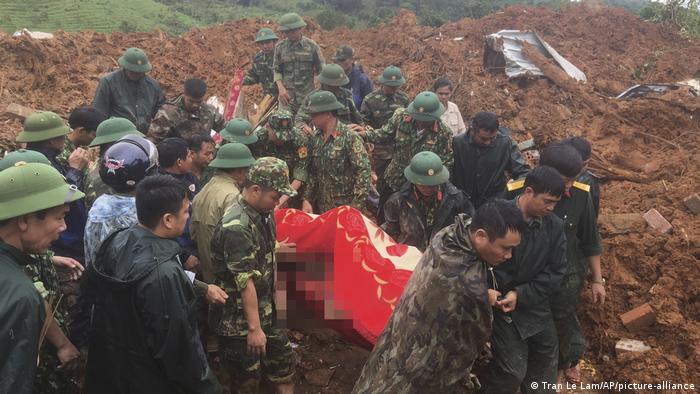 Rescue teams in Vietnam raced against the clock on Sunday in search for a dozen men, after a series of landslides overwhelmed an army camp.

Heavy rain has pounded over central Vietnam for more than a week, resulting in floods and landslides that have killed at least 64 people, according to the country's disaster management authority.

"From 2 a.m. until now, there have been four to five landslides, exploding like bombs, and it feels like the whole mountain is about to collapse," local official Ha Ngoc Duong said, as reported by Vietnamese newspaper VnExpress, warning that the situation could worsen.

The bodies of some 22 soldiers from the army camp were recovered early on Sunday morning, according to local media reports. Ongoing rain has hampered rescue efforts. Days before, 13 rescue team members died trying to reach a group of 30 employees of a hydropower plant that had been buried by the landslides. 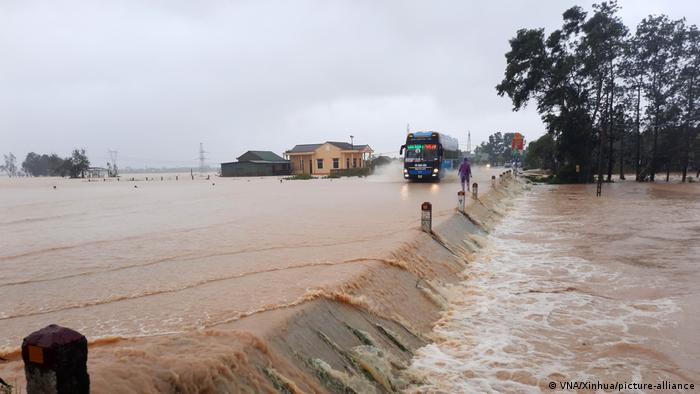 The rains have flooded nearly 200,000 houses in the region.

Authorities also warned that river levels in the country had reached their highest in two decades, state media said.

The disaster management authority raised its risk alert warning to the second highest level on Sunday, warning of further flooding and landslides. Torrential downpours have flooded nearly 200,000 houses and 300 schools in the region.

Since storms began on October 6, some 72 people have died and a further 19 are still missing, Vietnam's Central Steering Committee for Natural Disaster Prevention and Control said in a report.

Though Vietnam is prone to natural disasters and regularly suffers more than a dozen storms each year, which often bring flooding and landslides, this month's disaster has been the worst the country has faced in years.

Neighboring Cambodia has also been affected by heavy flooding in the region. The death toll there jumped to 20 on Saturday, according to disaster management authorities.

Despite the troubled global economic environment amid the COVID-19 pandemic, the Vietnamese government remains sanguine about the nation's economic prospects and sets an ambitious growth rate target for this year.

If Hanoi wants clean air, residents in the Vietnamese capital are going to have to kick their moped habit. Or at least trade in polluting models for cleaner alternatives.

A forest against climate change in Vietnam