'Victory is in sight' in the fight against Ebola 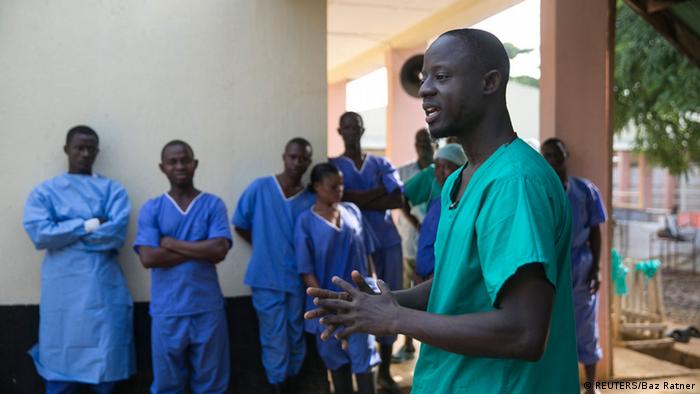 Sierra Leone lifted crippling nationwide restrictions on Friday that had been put in place to stem the tide of the Ebola epidemic amid signs UN special envoy Nabarro sees Ebola outbreak 'slowing down'the spread of deadly virus was ebbing#.

The West African nation of six million inhabitants had sealed off six of its fourteen districts and numerous tribal chiefdoms as a result of the outbreak which has killed more than 3,000 Sierra Leoneans and around 9,000 people in total.

President Ernest Bai Koroma pointed to a "steady downward trend" in recent weeks as the basis for the government's decision, adding that "victory is in sight, we must not relent, we must continue to solider on." Koroma said that the outbreak could not be considered over until his country, along with Liberia and Guinea, had registered no new cases for 42 days.

Koroma's optimism is mirrored by World Health Organization (WHO) reports that cases of the disease have been steadily declining for weeks. WHO's latest update shows 145 new cases for the past week in the three most stricken countries, the majority of which (117), are in Sierra Leone.

Along with the lift on travel bans, trading hours have been extended in the hard-hit western part of the country, which includes the capital Freetown. The move marks huge progress in a crisis which caused commerce to all but grind to a halt, particularly hurting rural communities and sparking warnings of a looming food emergency.

Sierra Leone has set a target for zero cases by March 31, and by the same date it will cease giving health workers "risk payments" and reopen schools. However many anti-Ebola hygienic measures put in place during the crisis will remain valid after this time, Koroma confirmed.

The move comes as trial vaccines for the virus from British pharmaceutical giant GlaxoSmithKline arrive in Liberia, with around 300 vials immediately available for the three worst-hit countries.

The sixth West African nation to record cases of Ebola has been declared free of the virus. The epidemic, which has killed thousands in the past year, appears to be on the decline. (18.01.2015)