The Venezuelan military has taken over food supplies and distribution as the country jumps from crisis to crisis. The opposition warned of granting greater powers to the military. 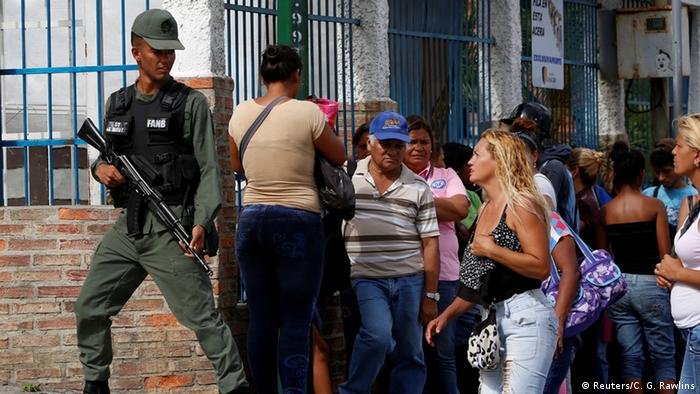 The Venezuelan military began to take control over food distribution on Tuesday in a desperate government bid to control shortages of basic food and staple goods that threaten to unleash social instability in the oil-rich country.

Defense Minister Vladimir Padrino, who is in charge of the new body, said the move was "a matter of the nation's security and defense."

The decree gives the military power to force private enterprises to sell goods.

"We have taken some ports and have started to go to some silos, warehouses, and public and private businesses," Padrino said.

Maduro said Monday the program would end the practice of corrupt officials diverting of food deliveries to people who then resell it on the black market.

A combination of low oil prices, mismanagement and currency and price controls have led to triple-digit inflation and a shortage of almost everything in the country.

Nine out of 10 Venezuelans now say they are unable to buy enough to eat as supply shortages drive up prices, according to a study by Simon Bolivar University. The average Venezuelan waits 35 hours a month in long lines to buy subsidized food.

Riots and violence over shortages are on the rise, threatening social stability.

Maduro has blamed the country's multiple crises on an "economic war" and sabotage by the opposition and the United States.

Soap, toilet paper, and most importantly medicine: these were the necessary items Venezuelans rushed through the border to buy. The border between the two countries had been closed for nearly a year. (10.07.2016)