Protests have flared up as Venezuelan President Nicolas Maduro was apparently hit with objects after a pro-government rally. The ongoing economic crisis in the country has seen the president's popularity spiral downward. 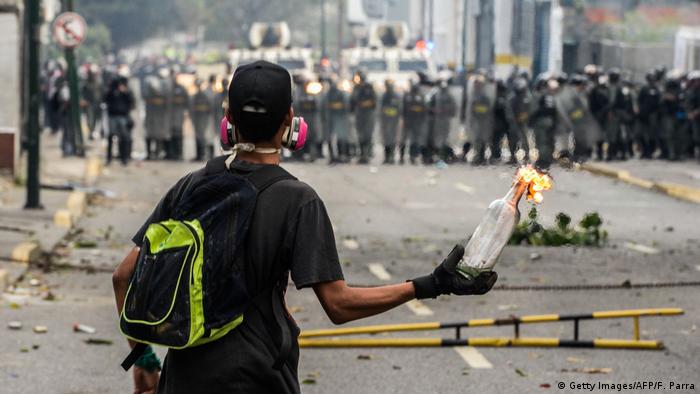 As protests against Maduro intensified in the slums of the South American country on Wednesday, the death count for the week rose to four individuals after the state prosecution service confirmed two deaths that had occurred the day before.

The prosecutors confirmed that a teenage boy had died in the western city of Barquisimetro on Tuesday night, with opposition politician Alfonso Marquina stating on Twitter that the boy "was shot in the abdomen last night" and reporting his name as Brayan Principal.

The prosecutors also confirmed the death of a 36-year-old man in the same city.

The newly confirmed deaths double the week's total fatalities. Two 19-year-old students had already been killed during the ongoing unrest, one on April 6 and one on April 11.

The confirmation of additional deaths came just hours after Venezuelan President Nicolas Maduro was apparently hit with items thrown by opponents on Tuesday.

The incident occurred in San Felix, in the eastern state of Bolivar, during a pro-government rally. Following the rally, Maduro was led through the crowd in an open-top car in a military parade. The parade was mobbed by onlookers when Maduro was hit by items thrown by the crowd. Maduro was surrounded by security after the items were thrown. State television was covering the rally before cutting transmission amid the chaotic scenes.

Witnesses say onlookers threw eggs and stones at the president. Local press reported five people were arrested. Maduro did not appear to be injured.

The slums have long been considered the main stronghold of Venezuela's socialist leaders. Following the pro-government rally, however, hundreds of young men burned trash and clashed with police in the slums of the Venezuelan capital, Caracas, and other cities across the country.

Opposition leader Henrique Capriles Radonski tweeted "Venezuelans hate you wherever you go" in response to Tuesday's events, with state coverage of Maduro getting hit by items thrown by the crowd.

"Nicolas, the people of San Felix love you and want to feed you: that's why they threw eggs, tomatoes, vegetables, banana peels and other things," tweeted another opposition figurehead, Henry Ramos Allup.

The ongoing street protests are the largest Venezuela has seen since 2014. Those protests left dozens dead and Maduro continued to hold power. But with supermarkets running low on food and a massive spike in crime, opposition leaders have called for more protests to demand immediate general elections.

Police fired tear gas and rubber bullets at demonstrators in Venezuela's capital and other cities a day after Henrique Capriles had been given a 15-year-ban from running for office. State-controlled media stayed mute. (09.04.2017)

Protesters want a recall referendum to oust President Maduro, and they want it before a key date in January. If Maduro loses a recall vote before January 10, there will be a snap election. (02.09.2016)

The legislative powers of the opposition-controlled National Assembly have been taken over by the court. It is the latest stage in an ongoing power struggle between opposition and president. (30.03.2017)