The human remains in an ancient Roman tomb may belong to Saint Paul, Pope Benedict XVI revealed in a surprise announcement. Now the Vatican wants to open the sarcophagus and conduct further tests. 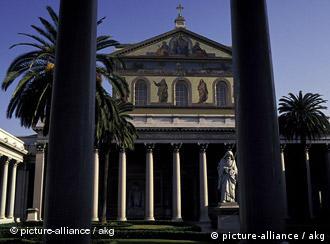 St. Paul's Basilica was built over the apostle's grave in the fourth century

The marble coffin in Rome's St. Paul's Basilica has never been opened, but, according to tests conducted thus far, the tomb contains pieces of human bone that have been dated to the time of Saint Paul.

Pope Benedict shared the findings Sunday at a service outside the church marking the end of the Vatican's Pauline year in honor of the apostle. 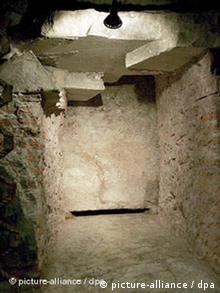 The tomb in St. Paul's Basilica has been sealed for some five centuries

Carbon dating showed that the bone fragments belonged to someone who lived between the first and the second century AD, the pontiff said.

"This seems to confirm the unanimous and uncontested tradition that they are the mortal remains of the Apostle Paul," added Benedict.

Paul - born Saul - had actively persecuted Christians, but converted after seeing Jesus in a vision while on the road to Damascus. He is believed to have been beheaded in the year 67 in Rome after years of travel as an early missionary to spread the message of Jesus.

Archeologists collected the bone fragments by inserting a probe through a small hole in the tomb, which is located under the basilica's main altar.

Though the findings had been known for more than a year, the Vatican waited for Benedict to make the official announcement. He is likely to approve further tests and the opening of the tomb.

The Society of St. Pius X, a controversial ultraconservative Catholic group, has ordained three new priests despite being warned by German bishops and the Vatican that the move would be considered illegitimate. (27.06.2009)

Archeologists in Germany have uncovered what they think is a 35,000-year-old bone flute, making it the oldest known instrument in the world. (24.06.2009)

Greece's New Acropolis Museum opens its doors this weekend, returning the controversial issue of the restitution of the Elgin Marbles to the public eye. (19.06.2009)