For the first time ever, the Vatican is staging an unusual exhibition in the Emirate of Shajah. The show is seen as a sign of openness and cooperation between religions. 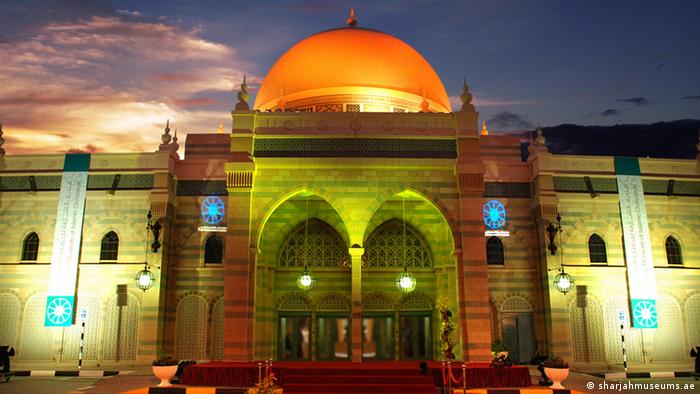 Ulrike al-Khamis has outdone herself. In a project that began six years ago, the art historian from Germany was tasked with bringing the extensive collections of the Emir of Sharjah into shape when the Sharjah Museum of Islamic Civilization was renovated and re-opened. The exhibition she is now presenting in a sparkling domed building almost the size of a soccer field has exceeded expectations.

"It is the first collaboration of the Vatican with an Arab country," said al-Khamis. Indeed, the exhibition is one-of-a-kind - not only because it presents excellent artworks but also because it furthers dialogue between Christians and Muslims.

A mashup of Western arts, Islam and Buddhism 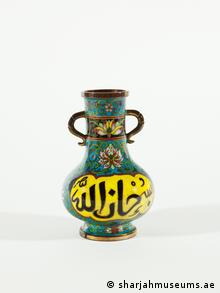 On display: a Chinese vase from the early 18th century bearing an Arabic inscription

The artworks on show from the Ethnological Museum of the Vatican stem from the 12th to the 19th century, but also include valuable objects from everyday life in the Arab world. Vases and bracelets, seals and armor, tapestries and precious daggers are on display. All the works come from the Islamic region between Morocco and Sudan all the way to Western China, but are now owned by the Vatican.

Many of the objects embody the dialogue between the Muslim and Western worlds. There's a dime-sized Koran produced in a print shop in Glasgow, and yellow mugs from Western China that bear an Arabic inscription surrounded by lotus flowers, which are a Buddhist symbol.

"We had only one year to prepare this show," said Ulrike al-Khamis. When the German art expert began advising in Sharjah, one of the emirates of the United Arab Emirates, she did not know what she was getting herself into.

"I traveled to Rome with my colleagues. We, the experts from Sharjah, and some Christian art historians searched the chambers of the Vatican together and discovered several pieces that had never been exhibited before," she recalled.

The result is a unique show in Sharjah that presents a comprehensive look at Islam. 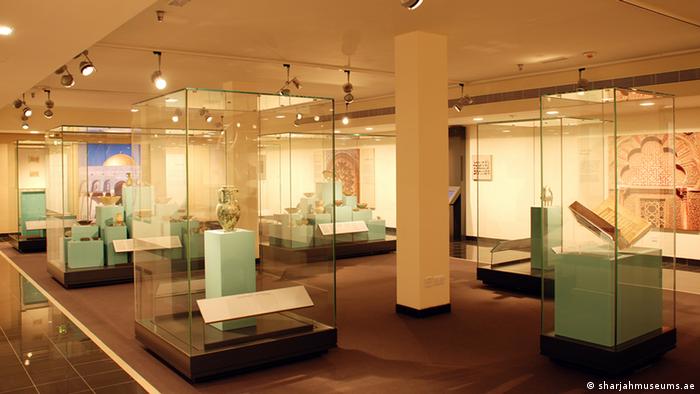 Presents for the Pope

Most of the objects now on show had arrived in the Vatican in 1925 when Pope Pius XI hosted a kind of international cultural exhibition comprised of gifts presented to him from private donors and missionaries stationed all around the world. There were artworks by Australian aborigines as well as pieces from Latin America, Asia and Polynesia. From the Islamic world, there were swords and seals, jewelry and garments. It was a truly global exhibition. 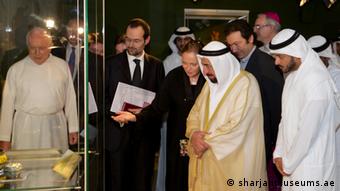 Ulrike al-Khamis is pictured with the Emir of Sharjah, Sultan al-Qasimi (center), and the director of the Ethnological Museum in the Vatican, Father Nicola Mapelli (left)

Around 100,000 works of art were collected in Rome for the show, but needed a permanent location after that. In 1926, the Pope established a new museum to keep the works, the Ethnological Museum, which was housed in the Lateran Palace. Half a century later, the museum was relocated to its present site in the Vatican.

However, it has been shut down several times since then and never fully reopened. The museum's current director, Father Nicola Mapelli, has sought to make the collection's works available via partnerships with other cultural institutions - such as the Museum of Islamic Civilization in Sharjah.

The art of diplomacy

In the case of Sharjah, the Vatican's museum found a like-minded partner. The small emirate is led by Sultan al-Qasimi, an intellectual interested in culture who's written a number of books himself and is interested in furthering intercultural dialogue. More than 20 years ago, al-Qasimi launched the most important biennial for contemporary art in the Arab world, the Sharjah Biennial, and more than 40 museums have been established under his reign. 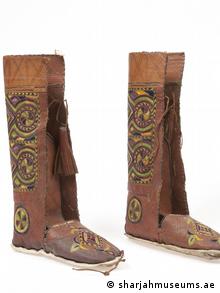 These boots from Senegal are included in the exhibition

The fact that Rome is lending its works for the first time is an act of diplomacy in line with Pope Francis's current policies. While Pope Benedict XVI had distanced himself from other religions, his successor is pursuing a different policy. In October last year, during a speech for the sponsors of the Ethnological Museum, Pope Francis pointed out the unifying role of culture in religious, social and moral matters.

In the exhibition catalog, the Vatican writes that it will treat the Islamic objects "with the same amount of respect as the Leonardos, Raffaels and Michaelangelos." Fittingly, the title of the exhibition is "So that you may know each other." which is actually a verse from the Koran in response to the question of why people are so different.

Mutual understanding between Christians and Muslims is exactly what the exhibition aims at. Taking history into account, dialogue between the religious groups cannot be taken for granted.