The man who has won more Olympic gold medals than anyone in history has been suspended for six months by USA Swimming. Michael Phelps will also miss next year's world Championships. 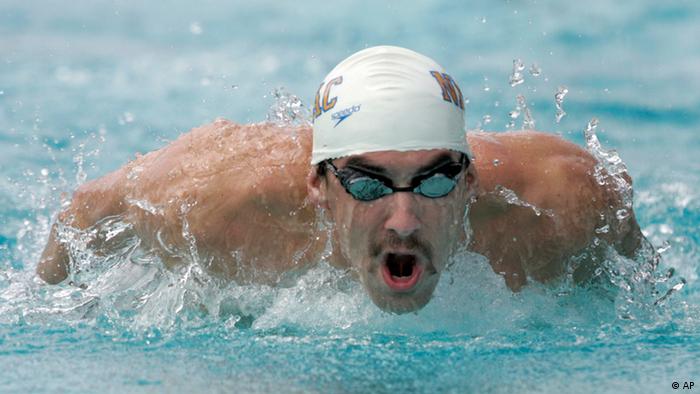 USA Swimming's executive director, Chuck Wielgus, announced the decision of the sport's national governing body in a statement released to reporters on Monday, less than a week after Phelps was charged with drunk driving.

"Membership in USA Swimming, and particularly at the National Team level, includes a clear obligation to adhere to our code of conduct," said Wielgus.

"Should an infraction occur, it is our responsibility to take appropriate action based on the individual case. Michael's conduct was serious and required significant consequences."

The 29-year-old swimmer was arrested by Baltimore police last Tuesday after they pulled him over for speeding and crossing the double center lines in a motorway tunnel in the city.

Police documents indicated that Phelps blew .14 percent in a Breathalyzer test. The legal limit for blood alcohol in the state of Maryland is .08 percent. He has been charged with driving under the influence, speeding and crossing double lines. Police said they had clocked his Land Rover traveling at 84 miles per hour (135 kilometers per hour) in a 45-mile-per-hour zone.

This is the second time Phelps has been charged with drunk driving, the first case coming in 2004, when he pleaded guilty to the lesser charge of driving while impaired and was sentenced to 18 months probation.

No worlds for Phelps

Although his suspension only lasts for six months, the two sides also agreed that he would not compete in the world championships in Russia next August. In addition, he will also forfeit a monthly stipend from USA Swimming.

"Michael accepts USA Swimming's sanctions," said a spokesman at Octagon, the company that represents Phelps. "He has apologized for his actions and, as he shared yesterday, is taking steps to address them."

After apologizing for the incident on Sunday, Phelps said he was checking himself into rehab.

Phelps has won a total of 22 Olympic medals during his career, 18 of them gold.

He had just recently returned to top level competition after being retired for two years.

More gold for Phelps, bit less for UK, one for Germany

American swimmer Michael Phelps has become the most decorated Olympian ever after winning his 19th Olympic medal. (31.07.2012)