Robert Menendez, the US senator charged with corruption, is to temporarily step down as ranking member of the Foreign Relations Committee. It is not yet clear who will replace him. 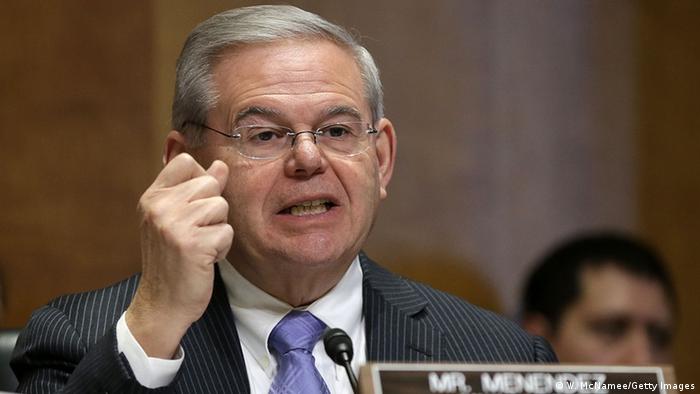 Two US Senate aides have said that Robert Menendez is to step down temporarily from his position as ranking member, or top Democrat, on the Senate Foreign Relations Committee.

Menendez was indicted on public corruption charges on Wednesday.

Until January, the influential senator had been chairman of the foreign relations panel.

Senators Barbara Boxer and Benjamin Cardin are the next most senior Democrats on the influential panel.

Boxer is believed to be focusing on environmental issues ahead of her retirement as a senator in two years time.

The US Department of Justice said in a statement Wednesday that Menendez was indicted in New Jersey along with his friend and Democratic Party donor, Salomon Melgen, a Florida ophthalmologist.

The two men were charged with one count of conspiracy, one count of violating the travel act, eight counts of bribery and three counts of honest services fraud, the Justice Department said, correcting an earlier statement citing seven bribery counts.

Between January 2006 and January 2013, the Department said: "Menendez accepted close to $1 million worth of lavish gifts and campaign contributions from Melgen in exchange for using the power of his Senate office to influence the outcome of ongoing contractual and Medicare billing disputes worth tens of millions of dollars to Melgen and to support the visa applications of several of Melgen's girlfriends."

Speaking in Newark, New Jersey on Wednesday, Menendez said prosecutors in the case were "dead wrong" and he intended to prove it.

"I ask my friends, my colleagues and the community to hold their judgment and remember all the other times when prosecutors got it wrong ... I will be vindicated," Menendez said. "This is not how my career is going to end."

Menendez was scheduled to appear in court in Newark on Thursday, his spokesman said.

Following in her husband's footsteps, the wife of the former Malaysian prime minister has been found guilty of graft. Najib Razak has already begun his 12-year jail sentence.

During a public hearing on the Capitol attacks, US Justice Department officials recounted persistent badgering from former President Donald Trump to call the 2020 presidential election corrupt.

Jackson is the first Black woman to serve as a justice in the US Supreme Court. Three Republican Senators supported her nomination, tipping a narrow vote in her favor.