US Secretary of State John Kerry has spoken to Sri Lanka's top Tamil leaders as he wrapped up a visit to the island nation. Kerry's talks were aimed at promoting reconciliation between the government and minorities. 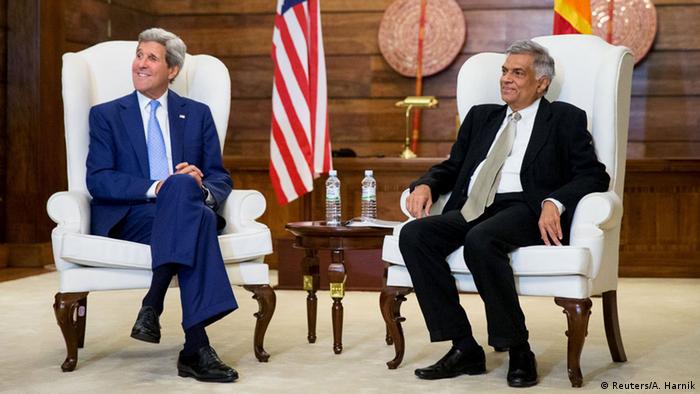 John Kerry met with leaders of the Tamil National Alliance (TNA), the main party of Sri Lanka's minority Tamil population on Sunday. The US Secretary of State spoke with TNA head Rajavarothiam Sampanthan among others in Sri Lanka's capital Colombo.

Kerry's two-day visit to the South Asian island country began on Saturday, marking a beginning of the US' renewed interest in Colombo and Sri Lanka's return to the international diplomatic fold.

"We intend to broaden our partnership with you," Kerry told leaders at a meeting in the Foreign Ministry in Colombo. Foreign Minister Mangala Samaraweera said Kerry's visit signified the island's return "to the center of international affairs." Sri Lanka would become "a full-fledged parliamentary democracy" and an "investor's paradise," Samaraweera promised.

Quest for the truth

Shortly after landing in Sri Lanka, Kerry gave a speech demanding an investigation into the cases of thousands of missing Tamilians in the country's 37-year-long separatist war which claimed over 100,000 lives. Sri Lankan forces were accused of killing more than 40,000 Tamil civilians.

"Try to find wherever the truth may lead. No matter how painful that truth is… It's the right and the humane thing to do and it is, believe it or not, an essential part of the healing process," Kerry said.

The US official also promised technical assistance to Sirisena's administration, which promised to investigate allegations into war crimes in the Tamil conflict. Kerry also urged the government to free the hundreds of Tamils in the island who were being held without any charges against them.

As Sri Lanka's new president, Sirisena is trying to reset the country's diplomatic relationsafter his predecessor Mahinda Rajapakse got closer to China, but ignored other regional powers like India. Rajapakse's government also came very close to sanctions after it refused UN investigators entry into the country for examining allegations of war crimes and delayed a report on the subject.