US Catholicism at a crossroad | Americas| North and South American news impacting on Europe | DW | 14.03.2013

US Catholicism at a crossroad

A major realignment is taking place within the US Catholic Church. A generational change coupled with the growing number of Hispanic members will radically alter the face of American Catholicism. 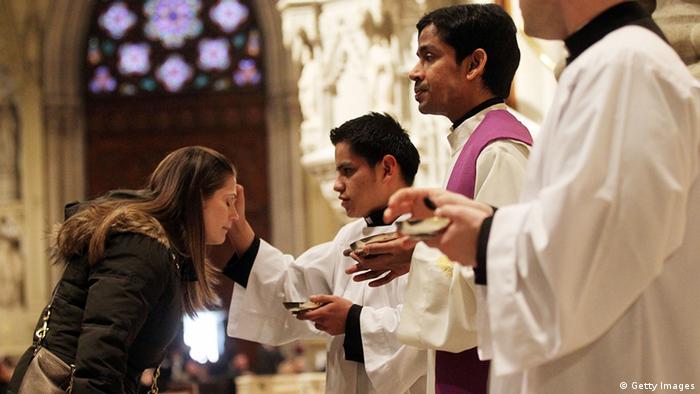 Driven by demographic, sociological and cultural changes the world's fourth largest Catholic Church will undergo a massive transformation in the next five years. During that time frame the number of US Catholics born in 1940 or earlier will fall to clearly below the 10-percent-mark, relegating the so-called pre-Vatican II (Second Vatican Council - the ed.) -generation to demographic insignificance as far as influence in the Catholic Church is concerned.

The magnitude of this generational shift becomes fully evident when one compares their dwindling numbers to the fact that pre-Vatican II-Catholics made up one-third of all US Catholics in 1987. It's difficult to overestimate their influence on Catholicism in the United States as it is today.

"They built the great urban centers, the big parishes in the big cities and now they are being left and closed because people have moved to the suburbs," says William D'Antonio, author of the forthcoming book "American Catholics in Transition" who is one of the most astute chroniclers of the Catholic Church in the US. "We leave behind the great urban parishes with their big parochial schools and their big 20th century churches."

But the pre-Vatican II-generation actually leaves behind much more than grand places of worship and inner city parishes. Gone with them is also their 60 percent mass attendance rate that dwarfs today's average attendance rate of around 30 percent.

"What is happening demographically is that the church's most loyal Catholics - in the sense of church attendance and that they are actively engaged in the church - are leaving the scene," explains D'Antonio who since 1987 has conducted the most exhaustive study of US Catholics.

The impending departure of the oldest Catholic cohort is even more significant because it is not merely a huge generational shift, but also marks a massive regional realignment.

"We have the end of the white European Catholicism that built the church from 1890 to 1950," says D'Antonio.

Already Hispanics account for roughly 45 percent of the youngest Catholic cohort, 18 years and older. Within the next few years their number will continue to grow and they will soon make up half of all US Catholics. At the same time, the geographic center of American Catholicism which had traditionally been in the Northeast and Midwest will move to the South and Southwest where the majority of Hispanic Catholic lives. 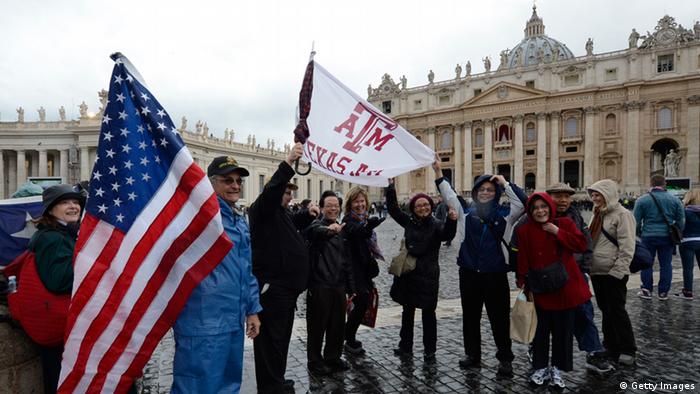 And that's not all the challenges facing American Catholicism. In the midst of this demographic and regional upheaval, the Catholic Church in the US is also struggling with a continuing divide between the hierarchy and the laity. This gap has only been widened in the last years by the sexual abuse scandals. "There is a fissure or divide there that is probably more significant than at any other time in American Catholic history," notes Robert Orsi, Grace Craddock Nagle Chair in Catholic Studies at Northwestern University in Evanston, Illinois.

The transformation of American Catholicism that occurred in the last decades can only be compared to the massive European immigration that made the Catholic Church the largest denomination in the US over 100 years ago, says Orsi: "Because in fact the bishops are dealing with the most educated and prosperous Catholic population in American history."

But the societal and cultural ramifications of this tectonic shift among US Catholics has not been fully appreciated by the church hierarchy, says Orsi. "The major fact of American Catholicism right now is that American Catholics as a people are far more liberal than their bishops."

While the bishops still want to hold on to their Church-given role as the main moral arbiter, Catholic laity never accepted that role from according to the very first study conducted in 1987 until today, says D'Antonio. Instead, he explains, Catholics expect moral guidance either from their own individual conscience or from the laity and the hierarchy working together to resolve moral issues. According to D'Antonio, this attitude has only been compounded by the sex abuse scandals and attempts to cover them up both of which further undermined the trust of Catholics in their bishops.

What's more, adds D'Antonio, the growing trend toward resorting to ones conscience for moral guidance should not really come as a surprise for the church hierarchy because it is part and parcel of what constitutes American Catholicism. "It is this idea of personal autonomy. You are responsible for your behavior. There is this basic cultural norm that goes way back to the early pilgrims and protestant leaders of the society. Catholics have taken that and modified it around the conscience idea."

The rise of the individual conscience as moral authority coupled with the social and economic progress made by Catholics and the cultural reality that they experience explains why many Catholics don't follow church teaching on controversial issues like abortion, contraception or homosexuality.

"Today everybody knows people who are gay or lesbian," says D'Antonio. "Suddenly it is not an abstract idea, it's a very concrete, lived experience idea. When you have to look at your niece, nephew or a friend's son or daughter and you see them grow up and you see that they are ordinary good people, their being gay or lesbian is just part of who they are."

To many Catholics the teachings of the church are at odds with their real life problems. "And we solve it according to the way our laity are by looking at it by reason as well as faith," says D'Antonio. 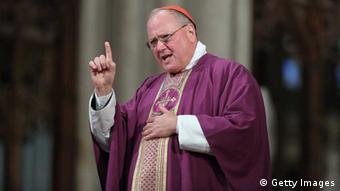 Catholics are the largest denomination in the US

Rome is far away

That does not mean, note the experts, that the pope and the Vatican are unimportant to American Catholics. As a person the pope actually is very respected and revered by US Catholics. Still: "I think in the end American Catholics are a very parish-based community and I think about their parish priests and fellow parishioners," says Orsi. "I don't know how much Rome figures in their understanding."

This is unlikely to change, adds Orsi, but while Rome is indeed far away for many Catholics, a major characteristic of American Catholicism just as US society overall is its global nature that is reflected in the various local flavors of Catholicism in the US. That's why the experts view the current changes as a transformation and not as the looming decline of Catholicism in the US. They argue that despite a growing fissure between hierarchy and laity and a changing mass attendance habits, Catholicism in the US is still very vibrant - just under different circumstances than before.

Despite the fact that the United States, notwithstanding its large number of American Catholics, is often still regarded as a Protestant nation, Catholics had and continue to have significant influence in US society which often goes unnoticed. Franklin D. Roosevelt's "New Deal" reforms in the 1930s were strongly supported by many US bishops who were closely aligned with the labor movement, notes D'Antonio.

Today Catholics are active in all important areas of American society. The best example of the influence Catholics currrently wield in the US is the fact that five out of nine Supreme Court judges are Catholic. The glaring exception to the rule is of course the presidency. So far John F. Kennedy was the only member of the country's largest congregation to move into the White House.

The Archdiocese of Los Angeles has agreed a record settlement for four child abuse cases. Cardinal Roger Mahony, who is involved in the election of a new pope, is accused of protecting the pedophile priest in question. (13.03.2013)

Abuse victim: This pope was a 'total failure'

Among victims of clerical child abuse in Ireland, response to Pope Benedict XVI's resignation has been muted. John Kelly of SOCA (Survivors of Child Abuse) told DW why he thinks the pope didn't meet his obligations. (12.02.2013)

Rain, cold and hours of waiting didn't matter anymore when the new pope finally stepped out onto the balcony of St. Peter's Basilica. For the faithful, the choice was a surprise, but didn't stop them from celebrating. (14.03.2013)