UN′s Ban faces mounting criticism ahead of key summit | World| Breaking news and perspectives from around the globe | DW | 21.09.2009

UN Secretary General Ban Ki-moon is hoping to silence his critics by pulling off a successful and potentially fateful one-day summit on climate change on Tuesday. 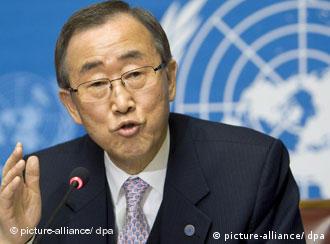 Over 120 presidents and prime ministers meeting at the UN headquarters in New York on Tuesday will have one day to inject political momentum into stalled climate change negotiations.

"The aim of tomorrow's summit is for leaders to mobilize the political momentum that can accelerate the pace of negotiations," Ban said at an event in New York on Monday.

Ban, who has been accused of being inefficient, scripted, quick-tempered and without charisma when it comes to tackling global issues, hopes to be redeemed by his work on promoting a global deal on climate change.

Staking his future on Copenhagen

Launching hard-hitting TV ads entitled 'Seal the Deal', Ban has staked his political future on a new global climate change treaty to replace the Kyoto Protocol, which expires in 2012. But, this could prove a double-edged sword for the UN chief. 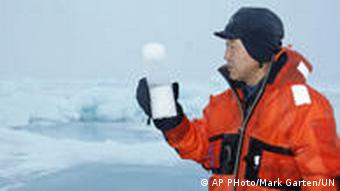 "Ban Ki-moon has staked a huge amount of his prestige and political capital in getting a deal on climate change in Copenhagen. If there isn't a deal, that will be severely damaging for Ban," said Richard Gowan from the Center of International Co-operation at New York University.

The United States is already hinting that a comprehensive agreement will not be achievable this year and European Union officials are concerned that the Copenhagen meeting may become superfluous if the deadlock is not broken soon.

"I confess that I am very worried by the prospects for Copenhagen. The negotiations are dangerously close to deadlock, at the moment," EU Commission chief Jose Manuel Barroso told a think-tank in New York on Monday.

Differences between the developing and developed world over emission reduction, and who is going to pay for it, threaten to cloud not just the climate change discussion, but also Ban's tenure at the top of the UN.

Failed climate talks might well prove to be the last straw, especially since Ban's critics already have enough ammunition, as it is. 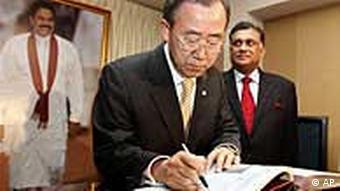 The UN chief has been criticized for shaking hands with Sri Lankan President Mahinda Rajapakse, without making sure that the deaths of thousands of civilians would be investigated, following the defeat of the Tamil Tiger rebels in May, 2009.

In Burma, the UN Secretary General met with ruling military junta members, but not with the opposition leader, Aung San Suu Kyi.

"Often, he is so eager to meet with the tyrants that he gives up all of his leverage and gets nothing in return," said Kenneth Roth, executive director of Human Rights Watch

At times, the criticism is unfair and inappropriate. Ban inherited one of the toughest jobs on the planet and a position that comes with little real power attached. Persevering, he succeeded in launching a UN mission in Darfur and pushed open the door to humanitarian aid in Burma.

"It's just who he is and within the confines of who he is, he is indeed an earnest, sincere, concerned, hardworking and quite admirable person. But, that doesn't mean he is the right person for the job," said author James Traub who wrote a book on Ban's predecessor Kofi Annan.

Ever a cautious diplomat, Ban has avioded alienating the major powers, who will decide on his re-election two years from now. But, UN observers are already openly questioning whether this will be enough to enable him to keep his all but thankless job.

Merkel and Sarkozy call for tax to fight climate change

German Chancellor Angela Merkel and French President Nicolas Sarkozy have called for the UN to support a carbon tax on imports from countries who fail to back international efforts to fight global warming. (19.09.2009)

Desertification should not take a back seat to climate change debate

The importance of fighting desertification is in danger of being overlooked by the attention given to climate change negotiations scheduled for the end of the year, science and technology expert Steffen Bauer writes. (15.09.2009)