Hachalu Hundessa — famed for his political songs — had been considered a voice for Ethiopia's Oromo ethnic group. Heavy violence has been reported following his death, with multiple people killed in ongoing protests. 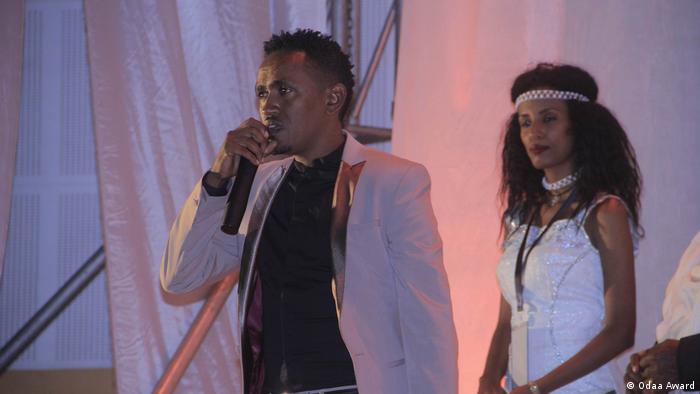 The context to the artist's death was not immediately clear, although the US Embassy in the Ethiopian capital said Hundessa's supporters had blamed security forces and "assume a political motive" for the crime.

His death sparked protests across Ethiopia's Oromiya region on Tuesday, with at least eight people killed in the wave of violence according to an official tally, while some estimates have put the number as high as 50. According to a police spokesman, the dead included both protesters and members of the security forces.

Police also detained opposition politician Jawar Mohammed on Wednesday alongside 34 others. The arrest of Jawar, a former media mogul who went on to join the opposition Oromo Federalist Congress (OFC), risks stoking ethnic tensions in the region even further.

An interview with DW's Colleta Wanjohi about the killing of Hachalu Hundessa and its ramifications features on Tuesday's Africalink radio show which is available on DW Africa's Facebook page.

Music: A tool of protest

Three people were killed on Tuesday and others were critically injured when protests erupted, reported news agency Agence France-Presse. The internet was shut down, major roads were blocked, tyres were burned and smoke was seen billowing across the city.

The German Embassy in Addis Ababa warned people to avoid large crowds and driving through the city, citing calls for demonstrations on social media.

'Voice of a generation'

Ethiopia's prime minister, Abiy Ahmed, expressed his condolences and tweeted that an investigation was currently under way.

Laetitia Bader, Human Rights Watch's regional director, said in a statement that the government should act urgently to reduce tensions and ensure that security forces "do not make a combustible situation worse." 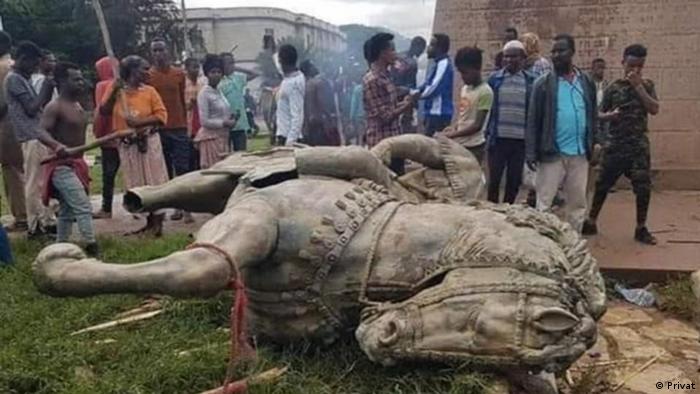 An equestrian statue of Ras Makonnen is demolished by demonstrators

The Oromo is the biggest ethnic group in terms of population in Ethiopia. "It is also the ethnic group "credited with leading Ethiopia through a transition from the previous regime to the current leadership under Abiy Ahmed, who himself is from the Oromo ethnic group," Wanjohi explained.

Hundessa in 2017 was described by OPride.com as an "electrifying voice of a generation that is revolting" after being awarded the portal's Oromo Person.

"For capturing and expressing the frustration, anger, and hope of Oromo protesters through revolutionary lyrics; for courageously defying forcible suppression of dissent and boldly proclaiming ‘we are here and not going anywhere'; for providing a stirring soundtrack to the budding Oromo revolution; for breaking down fear and structural barriers through rousing musical storytelling, and for uniting the Oromo masses and amplifying their collective yearning for change, Haacaaluu Hundeessaa is OPride's Oromo Person of 2017."

The Oromo, Ethiopia's largest ethnic group, had taken to the streets to complain about what they perceive as marginalization and persecution by the central government.

Oromo protests made international headlines when Ethiopian long-distance runner Feyisa Lilesa — a member of the Oromo community — reached the finishing line raising his crossed hands at the Rio 2016 Olympics. The crossed hands have become the symbol of the anti-government movement that started in the Oromia region and spread north to the Amhara region.

At the height of anti-government protests, Hachalu gave a concert in Addis Ababa, singing songs that spoke to concerns among the Oromo that they had been economically and politically marginalized.

"The Oromos did whatever we could, we have done our best, we can do no more than this. We served the small and the big people just so we can live together but we can't tolerate it anymore," were the lyrics of one song.

Ethiopia is no stranger to ethnic violence. With over 80 different ethnic groups and Africa's second-largest country based on population, the country is extremely diverse and disagreements between various groups often spiral into communal violence.

An interview with DW's Colleta Wanjohi about the killing of Hachalu Hundessa and its ramifications features on Tuesday's Africalink radio show which is available on DW Africa's Facebook page.