Unlocking secrets of the polar night | Environment | All topics from climate change to conservation | DW | 16.01.2015

Unlocking secrets of the polar night

Winter is the dark season and colder than cold in the Arctic north. But climate warming is giving scientists the chance to find out what goes on in the Arctic ocean during the Polar night. 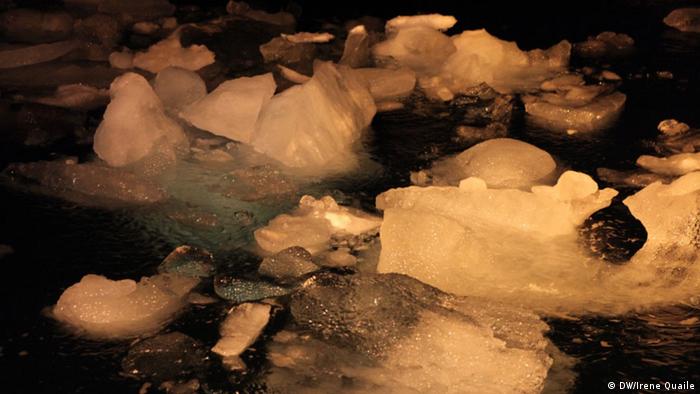 Chunks of glacier ice float past the side of the Helmer Hanssen. The research vessel has stopped in the Kongsfjorden off north-western Svalbard. On the laboratory deck, a hatch opens up. Two young men wrapped up against the cold are unraveling a long net attached to a circular hoop. They clip it to the end of a long cable. "Ready to go", says Sören Häfke.

The German scientist from the Alfred Wegener Institute in Bremerhaven is hoping for a very particular catch as a crewman helps lower the net into the dark water and down to the ocean floor. He and his colleague Lukas are interested in calanus finmarchius, a small crustacean that plays an important role in the food web. They are trying to find out what makes the tiny creature tick – almost literally. They will be examining the genes of these ocean inhabitants to find out how their biological clock works in the dark, Arctic winter.

In summer, it is assumed light tells them when to come to the surface to feed and when to go down deeper to avoid predators. But what happens in winter, when it is dark all day long?

"Life doesn’t stop when the light goes out" 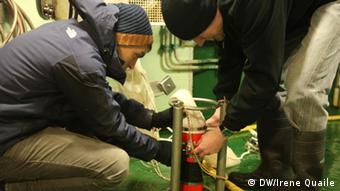 As Stig Falk-Petersen, Professor at the Arctic University of Norway in Tromso and expedition leader explains, until fairly recently the absence of light was thought to render biological marine life in the Arctic winter virtually dormant. With the ice cover making it difficult to access data, little was known about what goes on in the freezing waters and on the seabed below at this time of year. But thanks to research over the past decade – not least to this Polar Night project, which started in 2012 – that has now changed.

There are 18 scientists and postgraduate students on board the Helmer Hanssen, and a crew of 12 under Captain Jon Almestad. Built as an ice-going fishing vessel, the boat, which now belongs to Tromso University, is equipped with the technology needed to collect samples of plankton, crustaceans and fish, examine them in the lab, and store samples to be analyzed after the return to port.

Paul Renaud is Professor at the University Centre in Svalbard. He is coordinating the logistics of the expedition on board as well as conducting his own biological research.

He says the few studies done in the last ten years indicate greater activity in the Arctic Ocean in winter than previously thought. He believes processes other than light act as triggers for that activity. Although critical for the functioning of the ecosystem, "it’s not that when the light goes out, everything stops functioning," Renaud told DW. 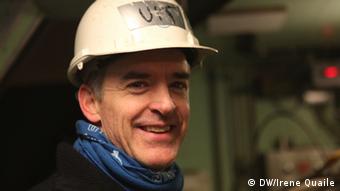 There are two main factors driving the increased research into the Arctic winter. Firstly, new technology makes it possible to take measurements under the ice all year round. One method is to use buoys tethered to the ice, but there are also now a number of permanent observatories which have been set up in the fjords to measure temperature, salinity, oxygen, light, chlorophyll and the movement of plankton. The number of research stations in the region has also increased.

The other major factor is climate change. At this time of year two decades ago, this fjord would have been completely covered with ice, whereas the sea ice can now only be found in its far reaches. Renaud says that while the absence of ice makes it much easier to sail up here, it is also changing the parameters scientists want to measure. "We are addressing a moving target," he said.

From whalers’ tales to hi-tech

Falk-Petersen is keen to stress that this is not the first time in history the area has been ice-free. He says that while satellite observations only began around 1975, climate records in the form of accounts by Dutch whalers and later British expeditions date back to 1550. Around 1680, the whole of Spitsbergen was actually ice free, Falk-Petersen told DW. That lasted until 1800, when the ice expanded from 82 degrees north to 76 degrees north – "a huge and fast expansion of the ice cap." The area then remained cold until approximately 1939. 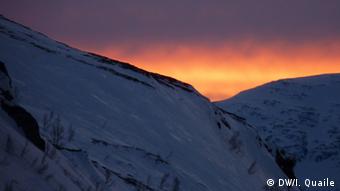 The beauty of a Polar night

The region where we are now has been open again since the year 2000. "So you have this large variation of ice cover, driven by various climate factors, - temperature, pressure system, and that means a dramatic change for animals living in this area," Falk-Petersen said. So far, he feels they have adapted well.

When it comes to forecasting how the Arctic Ocean and its ecosystem will react to climate change in the long term, the scientists here say we desperately need more data. The Intergovernmental Panel on Climate Change (IPCC) gives around ten scenarios for how climate in the Arctic could develop, Renaud explains. "Clearly, if we can rely on predictions that the Arctic will be ice-free in summer from the middle of the century at the latest, that will have certain effects on ecosystems."

Renaud says some organisms are highly flexible and can go without breeding for ten years without dying out. But short-lived organisms that rely on a certain timing of ice, or that live in the sea ice may well be more seriously affected. In order to tell how they will fare in the long term, more information is crucial. 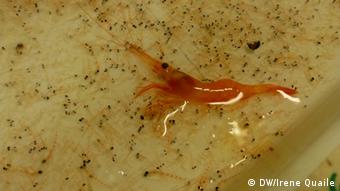 These tiny krill and a shrimp were caught in the fjord

Along with climate change, increased development is bringing more changes to this once inaccessible region. Renaud is involved in developing monitoring practices and stresses the need to study the effects of oil exploration, fisheries, tourism and shipping on sensitive components of the Arctic ecosystems.

But can research keep pace with the speed of development? The Svalbard expert says there will still be sea ice in the Arctic in winter for the next 100-150 years, which "buys us a little more time”. But the race is on to identify and monitor the impacts of rapidly growing activities like tourism and shipping.

That is why, up on deck of the Helmer Hanssen, Sergei Korsun and PhD student Olga Knayazeva from St. Petersburg are up to their wrists in mud. A large box-shaped container has just been winched up from the ocean floor. Their chosen species lives in the sediment. The tiny forams, single-cell marine organisms, which are present in huge numbers in all marine ecosystems, normally feed on light-dependent phytoplankton.

So how do they survive in the harsh northern winter? Winter, says Olga, is a long part of the year. "We can’t fully understand our tiny friends if we don’t know what happens then." 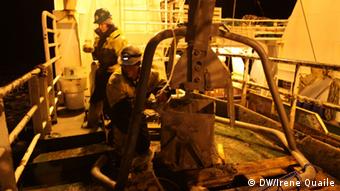 Muddy work for the Russians on board

As the northern lights start to spread their eerie brightness over the black Arctic night, Sergei and Olga take their samples to the lab and the next team comes on deck to set a trawl net for fish and crustacean samples. It’s not just the sea creatures that are active throughout the polar night. And for the scientists on board the Helmer Hanssen, there is still plenty of work to be done.

Global warming is changing the Arctic - while some herald the opportunities that come with easier access, the thaw could literally yank the ground out from under communities. DW talked to an expert about the risks. (19.12.2014)