Children have gone back to school in Sierra Leone after a nine-month break due to Ebola. After a slow start, classrooms are now filling up again and safety precautions are in place. 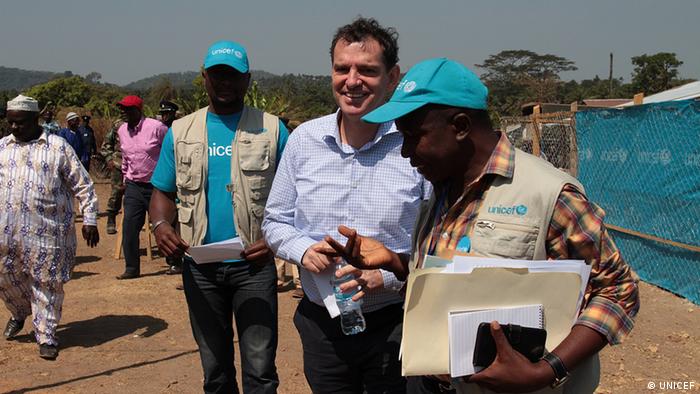 Children in Sierra Leone have returned to school for the first time in nine months after an enforced absence caused by the Ebola outbreak. Almost two million schoolchildren were set to return to their classrooms amidst a major health and safety operation supported by the UN's children's agency UNICEF. DW spoke to the head of UNICEF in Sierra Leone, Roeland Monash (pictured above).

DW: How has the return to school been progressing? Approximately how many children were back at school on Tuesday (14.05.2015)?

Roland Monash: We are still monitoring the numbers. On Tuesday morning when the schools first opened, the turnout was around 30 percent so not all children came back. This is not something to be immediately worried about. Normally, when a new academic year starts in Sierra Leone, it takes between one and two weeks before all children are back at school. I personally had thought that after such a long closure many more children would come but I think it was a combination of parents not being prepared yet, not having school uniforms and other items, and also still being concerned about Ebola and the school environment. There are reports that there were many more children in school this Wednesday.

This was the first day back at school in nine months. Presumably this wasn't an ordinary school day for the children?

No, definitely not. I visited one of the schools that was used as an Ebola treatment center on the outskirts of Freetown – UNICEF had a 20-bed facility there – basically the whole schoolyard was taken over by tents. Now we cleaned it all up and of course the community was very much aware about Ebola because it was right there in their own community. It was an emotional moment, the head teacher spoke words of compassion. You could see the seriousness on the faces of the children. So indeed it's not your regular opening of school year as normally experienced.

Presumably your main priority at UNICEF is to stop children from catching Ebola and to stop them from spreading it. What precautionary measures do you have in place?

First of all we had long discussions with public health experts, locally as well as internationally, on what is the right timing for reopening the schools. The opening was initially planned for early March but we delayed it, based on the fact that the number of Ebola cases had not come down quickly enough. But we are now having just one or two cases a day and it's really isolated in a few chiefdoms. In order to get the right measures in place, we developed a national protocol and guidelines for all schools, telling them how to open their schools safely. We trained 10,000 teachers in how to use those protocols. Together with the government and some other partners, we distributed close to 80,000 hand-washing stations, that's buckets with taps and soap, and over 55,000 thermometers around the country. So there are all these extra measures in place, also posters and brochures and radio discussion programs to make everybody aware of what they need to do to make sure the schools are safe. Every child has its temperature taken every morning.

What guarantees does UNICEF have that the resources it has made available in Sierra Leone will be properly deployed by the Sierra Leonean authorities?

We have monitors in the field, we have developed a rapid SMS system, and basically we have independent monitors who are going from school to school. At the moment we are visiting over a thousand schools, 96 percent of these schools have hand-washing stations in place, as well as thermometers and trained teachers. At the few schools which do not have these things in place, it's probably not because the buckets have been taken away, but basically there was not an updated list of schools. In recent years a number of schools have been added because of the population growth.

Does UNICEF, as a UN organization, have the resources it needs to do this job thoroughly?

It has been a huge undertaking and we are continuing to fundraise. We were fortunate that we had more than ten international donors willing to chip in to this education response, including the German government. We need more money, specifically for teaching materials and other materials, because of course children and parents need to feel confident that when the children go back to school they actually learn something. However, the basic minimum safety standards to prevent Ebola, we have that covered.

Schools reopen in Sierra Leone as Ebola slows down

Schools have reopened in Sierra Leone after a hiatus of more than eight months due to an Ebola outbreak. The deadly epidemic killed some 3,800 people and affected more than 12,000 in the West African country. (14.04.2015)

Two German federal ministers are on their way to West Africa, to offer Berlin's support as the region recovers from the effects of Ebola. They've also flagged creating specialist teams to deal with future crises. (07.04.2015)

The Ebola outbreak has devastated parts of West Africa, killing thousands and wreaking havoc on the region's economy. The International Monetary Fund has made good on its promise to help an economic recovery. (26.03.2015)