A new UNICEF report says violence and poverty are major factors affecting children’s wellbeing in both poor and rich countries. The document urges governments and businesses to do more to protect the rights of minors. 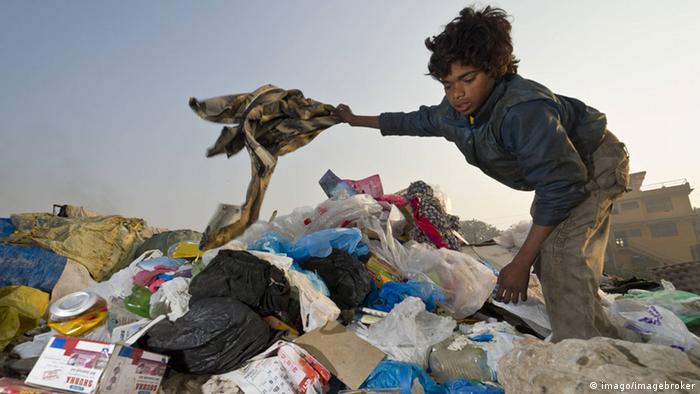 Forced labor, preventable disease and violent abuse are realities for hundreds of millions of children around the world, according to a UNICEF report on the situation of children's rights, presented Wednesday in Berlin.

The report highlighted that only 35 countries have a law that protects children from violence, and only 5 percent of children live in those nations.

"The risk of violence remains very high, even in places where children should feel safest - at school, at home, or in youth detention centers," UN Special Representative on violence against children, Maria Santos Pais, said in Berlin on Wednesday. Progress had been slow, she added.

The report, released 25 years after the adoption of the UN Convention on the Rights of the Child, found more than 150 million girls and 73 million boys experience sexual violence each year. Some 300 million children under five have problems with relationships, behavior and aggression because they were exposed to violence in their environment, according to UNICEF.

Further, 13.5 million girls under the age of 18, some as young as seven-years-old, are affected by early or forced marriages. And the proportion of minors who are victims of human trafficking increased by 27 percent between 2007 and 2010, the report said.

Although infant mortality has been halved since 1989, and the proportion of working children has dropped by a third, UNICEF urged governments, businesses and civil society to do more to protect vulnerable children, "to guarantee the rights of every child to survival, development, protection and participation."

"The welfare of children must be used to measure the social progress and sustainability of a country," the report said.

While most of the worst-affected children live in poverty and conflict zones, the report pointed out that factors causing exclusion and poverty needed to also be tackled in Germany.

Between 2000 and 2010, around 8.6 percent of German children and young people were living in poverty. In 2012, child care services took in more than 40,000 children because their parents were overwhelmed.

"If a country strengthens the rights of the child, it strengthens its future," said Jürgen Heraeus, Chairman of UNICEF Germany. There's a need for better functioning help networks, he added.

UNICEF urged that child protection be taken up as a central part of the international development agenda beyond 2015.

No birth certificate means no rights for millions of children

The birth of every third child under the age of five has never been officially registered, a new UNICEF report says. These minors often have no access to education or health care, and are easy prey for human traffickers. (12.12.2013)