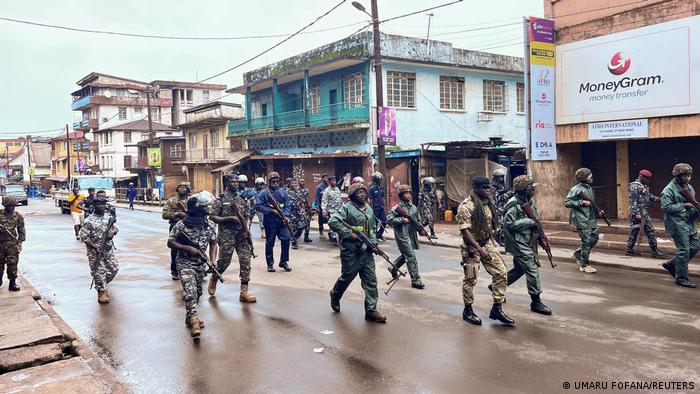 Riot police were deployed to disperse the protests

Shops in the central business district of Sierra Leone's capital Freetown have opened once again on Friday, with state agencies providing services to citizens following deadly protests earlier this week.

Heavy security presence still remains on the streets in parts of the capital.

There have been reports of police carrying out exercises in the city center on Friday morning.

"We have received reports that the police attacked a place [market] in the central business district," Kamara said. 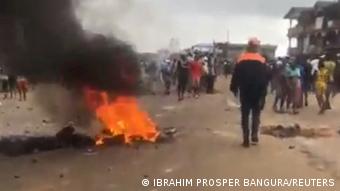 The government has accused the opposition of inciting the demonstrations.

The country’s vice president, Mohamed Juldeh Jalloh in televised speech on Wednesday had said that "for the last several weeks some self-serving Sierra Leoneans have intensified the call for violence and the forceful overthrow of the legitimate government of President Julius Maada Bio."

The president himself in another media interview described this week’s protests as acts of terrorism.

So far a Sierra Leonean citizen residing in Holland has been accused of instigating the insurrection.

According to police spokesman Brima Kamara, the expat  is said to be using various accounts on Facebook to spread hate against the ruling SLPP party.

The internet in the country is being disrupted with government suspecting those behind the protests are mobilizing on social media.

Are Sierra Leone's youth ready to take on the world?

A three-day protest over poor economic conditions turned violent on Wednesday, resulting in multiple deaths. Both protesters and police officers were among the casualities.

Six police officers were killed in anti-government protests in northern and western Sierra Leone on Wednesday, the head of police, William Fayia Sellu told the Reuters news agency on Thursday.

Protests were concentrated in the north and west — opposition heartlands — of the West African country. At least two civilians also died in Freetown.

But hospital sources told the AFP that at least six protesters also died in the violence in Freetown.

A police statement said several police stations were burnt down and vandalized around the country.

Police have also arrested 113 people in connection with the violence, the statement said.

Nanotechnology, blockchain, cloud computing: Sierra Leone's President Bio is banking on the most advanced technology to leapfrog the country out of poverty.