Polish authorities have launched a criminal probe after a TVN24 news channel report showed a neo-Nazi group celebrating Hitler's birthday. Having suffered more than most at Hitler's hands, many Poles are up in arms. 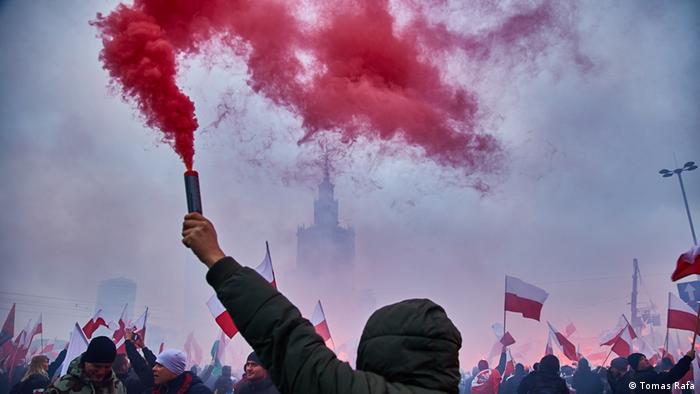 A prosecutor in Poland says that evidence shows without doubt that a Minnesota man was a Nazi unit commander. He is suspected of contributing to the death of 44 Poles. (13.03.2017)

Prosecutors have opened a probe into expressions of racism at a far-right march in Warsaw earlier this month. Some fear the surge in support for the far-right shows that their ideas are seeping into mainstream discourse. (21.11.2017)

Poland's prosecutor general opened an investigation on Sunday into the suspected "public propagation of fascism" after a report aired by the private television channel TVN24 showing members of a group called Pride and Modernity wearing Nazi uniforms.

"The Justice Minister has recommended to the regional prosecutor in Katowice to undertake an investigation into the public propagation of fascism,” the spokeswomen for the National Prosecutor's office Ewa Bialik said on Sunday. The crime is punishable by up to two years in prison.

The film, which aired on Saturday evening, shows the group waving Nazi flags, burning a large swastika and wearing Wehrmacht, unified armed forces of Nazi Germany uniforms as part of the celebrations to mark the 128th anniversary of the birth of Adolf Hitler.

The office of the prosecutor general said Pride and Modernity – and its sister group The Eagles Nest  - was behind a November protest when pictures of opposition European Parliament lawmakers were hung on mock gallows.

'Hitler was a gentleman'

"Hitler was a real gentleman, who women found fascinating and children adored. He was a really decent person, who never cursed and never allowed himself to behave badly,” one of the members of the group said, the film shows.

Jacek Lanuszy, the deputy head of Pride and Modernity, who is the parliamentary assistant to MP Robert Winnicki, sought to distance himself from those shown in the film when asked by TVN24 to comment. But he was also quoted by the channel as saying earlier that Nazi salutes made by members of his own group had simply been people waving. 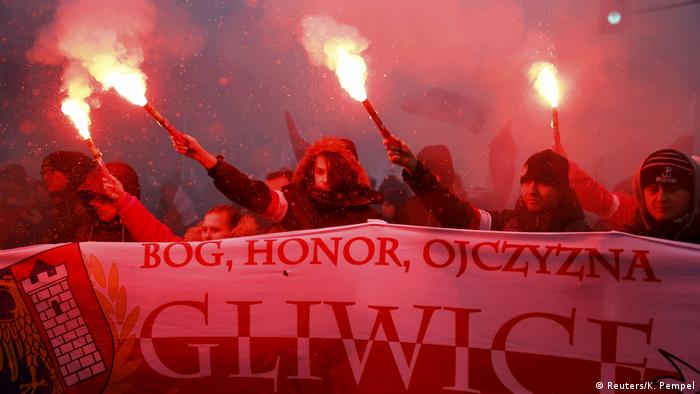 Prime Minister Mateusz Morawiecki tweeted that "the propagation of Fascism and other totalitarianisms is not only not in accord with Polish law, above all it tramples on the memories of our ancestors and their heroic struggle.”

The head of the Ministry of Interior and Administration, Joachim Brudzinski, said he had talked with the Minister of Justice on the "shocking events" shown in the material.

The opposition Civil Platform (PO) has attacked the ministry for dissolving the only group designated to investigate the activities of the group.

In response, the ruling Law and Justice (PiS) MP Jacek Sasin reportedly said he wondered "why one does not also ask why the Communist Party still operates in Poland.”

Islamophobic, homophobic, anti-Semitic and white supremacist banners at November's Independence Day rallies raised fears about the rise of the far right in Poland.

Some believe the rise of the far-right is linked to the success of the PiS and its opposition to immigration from mainly Muslim countries.

The march's organizers included the National-Radical Camp (ONR), the successor to a pre-war Polish fascist movement, the All-Polish Youth, a far-right youth organization and the National Movement.

Hardline white supremacist groups such as the National-Socialist Congress and the Szturmowcy (Stormtroopers) also took part.

The European Jewish Congress expressed "grave concerns” in August 2017 over an increase in anti-Semitic acts in Poland, while Rafał Pankowski, deputy editor of the Nighy Wiecej (Never Again) magazine says there has been a noticeable change in the political and discursive climate.

"It has become so much easier for people to say things they would never have said openly over the last 25 years," he told DW.

"It is no coincidence that growing anti-immigration, anti-Muslim, and generally xenophobic sentiment has been accompanied by a rise in anti-Semitic attitudes and behavior," Robert Blobaum, author of Anti-Semitism and Its Opponents in Modern Poland, told DW.

"PiS is engaged in a potentially perilous gamble by flirting with the extreme nationalistic right and with fundamentalist Catholics," Tomasz Basiuk, director of the Institute of the Americas and Europe at the University of Warsaw, told DW.

About 3 million Jews lived in Poland before 1939, 90 percent of whom perished in the Holocaust, many in concentration camps set up by the Nazis on Polish soil. Poland was one of the few Nazi-occupied European countries in WWII not to collaborate with Hitler and had no representation in the SS.

Warsaw has sought since 2015 to make use of the erroneous term 'Polish concentration camps' illegal.