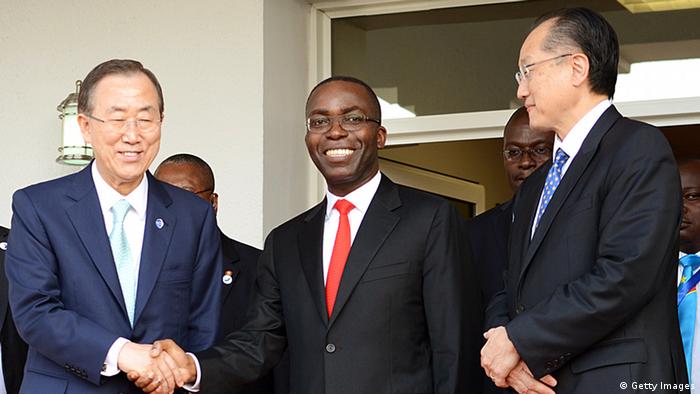 It was intended to be an important signal - a joint visit to the Democratic Republic of Congo (DRC) by UN Secretary General Ban Ki-moon and World Bank President Jim Yong Kim. The country has been in a state of crisis for decades. For the last twelve months the population in the eastern part of the country has suffered under armed clashes between government forces and M23 rebels. 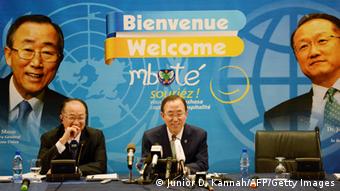 This is the first joint UN/World Bank trip

"We are determined to do more for crisis-stricken countries," Ban said in the Congolese capital Kinshasa. "And we are going to start here and now."

To underline this new resolve, the UN has created a new intervention force. In March 2013 the Security Council gave the green light for a 3,000-strong force to reinforce the existing UN Stabilization Mission in Congo (MONUSCO). For the UN Secretary General it is important to drum up support for the new mission.

The new force will have greater powers than the blue helmet peacekeepers already stationed in DRC. They will be able to "neutralize and disarm" rebels in the region. This is the UN's contribution to a peace agreement signed by 11 African states in Ethiopia at the end of February 2013.

Rebels of the M23 movement were not invited to the peace talks. At the time they were negotiating with the DRC government. Now, coinciding with the visit by the World Bank President and the UN Secretary General, they have launched fresh attacks against government forces. Reports say at least 20 people have been killed, including civilians. 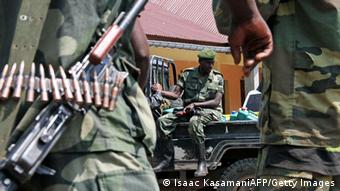 The timing of the renewed violence is no coincidence, says Phil Clark, a political scientist at the School of Oriental and African Studies in London (SOAS).

"M23 is sending a very clear message to the Secretary General that they see the UN now as an aggressor. They do not see the UN as a peaceful mediator in the conflict, they now see them as part of the problem," Clark said in an interview with DW.

Christoph Vogel is researching the conflict in the DRC with the Mercator Fellowship program. He is also not surprised by the fresh show of resistance by M23 rebels.

"Politically it is clear that the mandate of the intervention force is primarily aimed against M23," he said. It is, therefore, important for the new force to target other armed groups as well to avoid creating the impression that they are biased. There are still between 20 and 30 armed rebel groups in DRC which have not been included in either national or international peace efforts.

Building the right kind of road

Vogel sees the UN move to send in additional soldiers with a more rebust mandate as an attempt to win back credibility after UN blue helmets failed to prevent M23 rebels entering the city of Goma last November. He says a clear strategy to deal with the multi-faceted conflict in the region is lacking.

Phil Clark agrees with this assessment. "A robust MONUSCO that was mandated to protect civilians and that lived up to that would be a very important part of the peace puzzle in this region and would then allow the political actors in question to get on with the tough job of talking to each other and finding some sort of lasting solution," he told DW. 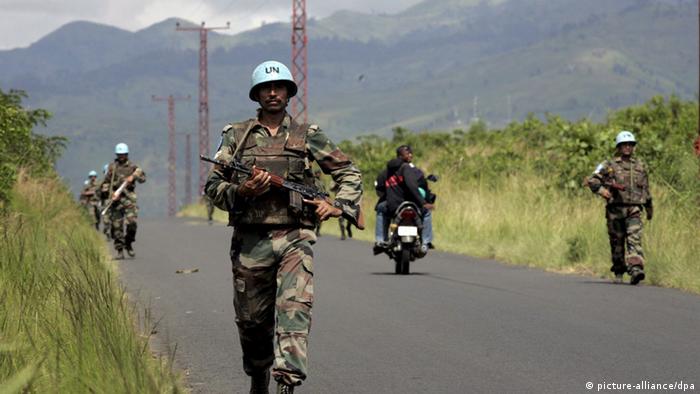 UN blue helmets in DRC are regarded as ineffective

During their visit to DRC, Ban Ki-Moon and Jim Yong Kim declared their intention of tackling the underlying problems. "That includes development," Ban said in Kinshasa. World Bank President Jim pledged a $1 billion dollar loan for the Great Lakes region, saying this could be an important contribution to peace.

Offering incentives to countries that favor peaceful conflict resolution is in line with the recommendations of the UN's new Special Envoy for the Great Lakes Region, Mary Robinson.

However, Alex Veit from the Institute of Intercultural and International Studies at the University of Bremen dismisses Jim's announcement as a PR move. He says that while economic support is not necessarily wrong, it does not go far enough.

"It is good to build a road because that encourages trade and can create jobs," Veit said. "But if there is no accompanying political strategy to end the war, then the road can encourage further fighting because the soldiers can move faster."

Congolese military forces have clashed with the M23 militia near the city of Goma, for the first time in nearly six months. UN Secretary-General Ban Ki-moon is expected to visit DRC in the coming days. (20.05.2013)

The DRC’s southern province of Katanga is rich in raw materials but the population hardly benefits and calls for independence are growing. Plans for political decentralization could help defuse the situation. (15.04.2013)