The UN rights chief has announced evidence linking the Syrian regime to war crimes. A UN inquiry has never specifically said which leaders at what level of government it considers responsible for the serious violations. 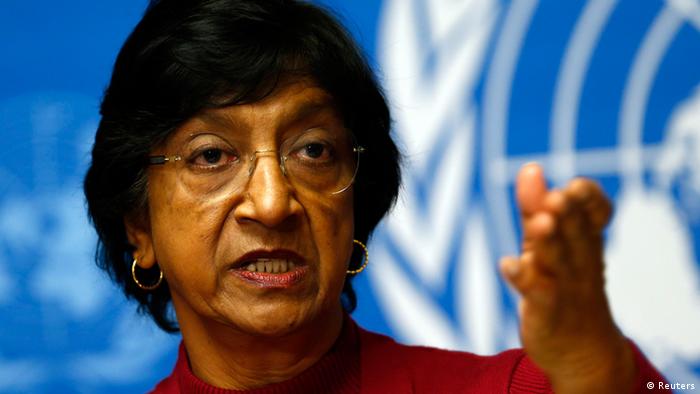 "The evidence indicates responsibility at the highest level of government, including the head of state;" Pillay told reporters Monday in Geneva. However, she said the names would "remain sealed until I am requested to furnish them to credible investigation," adding that "it could be a national investigation or international investigation."

The announcement seemed to point to the highest levels of the Syrian government while at the same time stopping just short of that. Pillay said even she cannot unseal the confidential lists compiled by the four-member investigative body, and insisted that she had only repeated what the investigators led by Brazilian expert Paulo Pinheiro had said.

"Let me say that I have not said that a head of state is a suspect," Pillay said. "I was quoting the fact-finding mission, which said that based on their facts, responsibility points at the highest level."

With no access to the country, investigators relied on more than 2,000 interviews in the region or within Syria by phone or Skype. Still, the commission of inquiry on Syria has produced a series of reports charging that government forces have systematically committed murder, torture, rape and forced disappearances, which may amount to crimes against humanity. The opposition has also committed such violations, but not to such a degree, according to the reports.

Pillay said the probe found "very serious crimes, war crimes, crimes against humanity." She reiterated her call for the case to be handed over to the International Criminal Court in The Hague to ensure accountability.

"The scale of viciousness of the abuses being perpetrated by elements on both sides almost defies belief," she said.

According to a US-Russian deal that headed off US military strikes against Assad's regime, Syria must destroy its chemical weapons arsenal by mid-2014. Pillay warned that efforts to destroy Syria's stockpile should not distract from killings with conventional weapons, which have accounted for the vast majority of deaths in the conflict.

"This is my concern," Pillay said, "that the inquiry into chemical weapons, which is utterly necessary, should not be used as a distraction from the fact that more than 100,000 people have been killed as the result of the use of conventional weapons."

Syria's civil war began in March 2011 as a series of peaceful protests against Assad's government. On Monday, the Britain-based Syrian Observatory for Human Rights, which has ties to the opposition, said that the conflict had killed an estimated 126,000 through December 1 - including 44,000 noncombatants. According to the monitoring group - which relies on a network of activists, lawyers and doctors on the ground in Syria - the government has also held about 16,000 people incommunicado in prisons.