The UN Human Rights Council has passed a resolution denouncing abductions, sexual violence and extra-judicial killings in Ivory Coast. This comes as the number of deaths in post-election violence continued to climb. 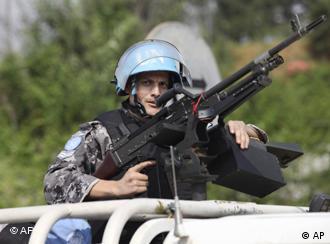 UN forces have had their peacekeeping mission in Abidjan extended

The United Nations Human Rights Council on Thursday condemned "the atrocities" that have occurred in Ivory Coast since the country's disputed presidential election last month.

Led by Nigeria on behalf of other African nations, the 47-member council reached a consensus and adopted the resolution without putting it to a vote. The resolution "strongly condemns human rights violations that have taken place in Ivory Coast" including abductions, sexual violence and the loss of life.

"It is regrettable that the current political impasse instills a palpable fear of further escalation of the human rights situation," said Nigerian diplomat Ositadinma Anaedu.

The UN had previously substantiated allegations of 173 killings and 90 cases of torture or ill treatment in Ivory coast since Dec. 16, UN deputy human rights chief Kyung-wha Kang told reporters at the council's meeting. There were also 500 reports of arrests or disappearances in the country over the past week.

Sending a message on violence

"The international community has sent a message to those in Ivory Coast who use violence as a means to achieve their objective that this will not be tolerated," US ambassador Betty King said.

On Wednesday, both Germany and France urged their nationals to leave the country provisionally amid concerns that the violence was spiraling out of control. It's not clear how many German nationals are affected, but there are believed to be around 13,000 French nationals in Ivory Coast. 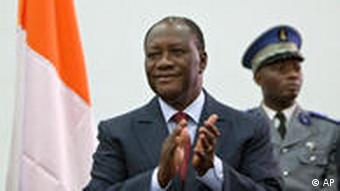 The escalation in tensions began after a presidential election in late November, when incumbent Laurent Gbagbo faced off against his opponent, Alassane Ouattara. The international community largely supports Ouattara, whom they say won the election. But Gbagbo has refused to step down.

UN Secretary-General Ban Ki-moon has warned that Ivory Coast could slide into a civil war; he has accused Gbagbo of trying to force UN peacekeepers out of the country and of blocking supplies to the troops.

For his part, Ouattara has called for widespread public uprisings and civil disobedience from his supporters. UN Refugees Agency reports that thousands of women and children have begun fleeing the country's post-election violence, heading for camps in Liberia and Guinea.

Meanwhile, on Thursday, an Ivorian army spokesman said the military stands united behind the incumbent.

Yet far from being a sudden and unexpected conflagration, observers say the election and its disputed results reflect ethnic and religious differences that have long been brewing under the surface of the relatively peaceful and prosperous Ivory Coast.

Ivory Coast is the world's largest cocoa producer. Its thriving industry boosted the living standards there so much that it has become an immigration hub for people from other, poorer African countries, such as Mali and Burkina Faso. Some of these people shared ethnic and religious ties to those living in the largely Muslim northern part of the country. 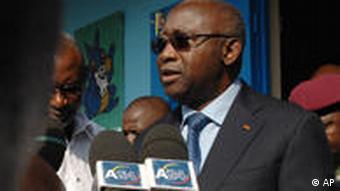 In turn, many people in the south of the Ivory Coast have started to demand protection for their national heritage - their "Ivorian-ness." That clumsy phrase - and the racial, economic and religious questions attached to determining who can be considered to be truly from the Ivory Coast or not - has been at the center of the Ivorian political struggle since the end of the 1990s.

Ouattara's broad international support reaches back to his time as the vice director of the International Monetary Fund, from 1994 to 1999, and as a leader of the Ivory Coast government in the 1990s. International observers consider him to be an experienced diplomat and politician, who can handle himself well on the world political stage.

Candidate from the north

Ouattara wasn't allowed to run for office in the 2000 election; the country's highest court blocked his bid saying he isn't really of Ivorian heritage. Since then, the notion of "Ivorian-ness" has been an argument used to keep undesirable candidates from running for office. 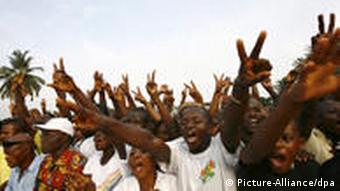 That ideology holds not only for politics, but also for the armed forces. In the multicultural Ivorian society, this means about a quarter of the population does not have some of the privileges afforded to others, and is systematically discriminated against.

That discrimination also gained Ouattara support from second-generation immigrants, who are fighting for their rights to full citizenship.

This ethno-political conflict is what underlies the current crisis, says political expert Gilles Yabi of the International Crisis Group. It is also the main reason for the creation of the rainbow-rebellion movement "Forces Nouvelles," says Yabi.

In 2002, the Gbagbo government attacked them, and fought from the north toward Abidjan. Yabi says the connection is significant for anyone who wants to understand the current confrontation.

"One of the most important political demands of the Forces Nouvelles during the armed conflict was the question of nationality. The question was which candidate was allowed to run at all, and whether Alassane Ouattara should be one of them. That means, from the very beginning, the armed struggle of the Forces Nouvelles was tied to Ouattara's political struggle to have his nationality recognized," Yabi said.

Candidate from the south

Laurent Gbagbo's stronghold is in the southern part of the country. He has been in power since he wrested it from then-military leader General Guei in 2000. At the time, Gbagbo was considered the great hope of the resistance movement against the one-party system.

Jeremy Soukrou is a Gbagbo adherent; he organized open debates prior to the election in order to promote Gbagbo's cause.

"We agree with and support the program of President Gbagbo. And we are ready to support him, to protect the institutions of our country, and defend his life - in a certain way, to defend the civil society in our country." Soukrou said. 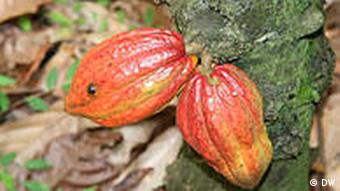 Cocoa has made the country relatively prosperous and stable

Both camps are clearly ready to use violence to support their views. A militia of young men who call themselves "Young Patriots" has joined forces behind Gbagbo, under the command of the charismatic Charles Ble Goude, whom Gbagbo has named youth minister. When Goude now goes through the neighborhoods of Abidjan calling for "total freedom" for the Ivory Coast, the violence can be turned against political opponents - but it can also turn against foreigners or UN soldiers.

Many of these youths get involved in the hope that their support will bring them more opportunities in the future, perhaps even one of the few jobs available in the country.

"The supporters of Gbagbo get a whole array of privileges for their help," Yabi said, including money or a career push for a loyal soldier.

Gbagbo also has the Republican Guard on his side. The group is also part of the Ivorian army, and is meant to protect state institutions. Furthermore, a paramilitary elite troop called CeCOS, which operates against organized crime in Abidjan, is sometimes used by Gbagbo as a private militia.

Gbagbo, who has filled key public positions with friends and supporters, continues to find support in these ranks. But if the internatioal community isolates him and continues to pressure him, some say the base constituency could begin to fall apart.

The UN says at least 50 people have been killed in the post-election crisis in Ivory Coast. The UN's Ban Ki-moon says peacekeepers there will not stand down from their mission and warned against attacks on UN troops. (20.12.2010)

The situation in Ivory Coast is deteriorating following an election leaving the country with two presidents and two governments. As the nation slips toward chaos, the international community fears a return to war. (17.12.2010)

Eight years after a military coup, Ivory Coast citizens are hoping to finally vote in a new president. But the elections have been postponed so many times in the past, that nobody is holding their breath. (28.10.2010)