A UN-mandated group has arrived in Damscus to investigate claims of chemical weapons being deployed during the Syrian civil war. The arrival follows months of wrangling over the terms of the probe. 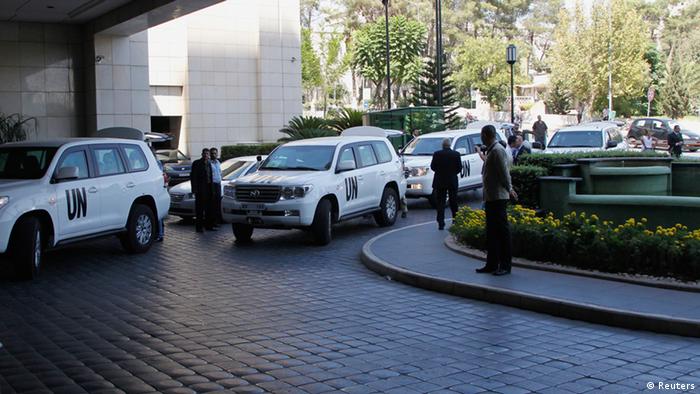 The UN team checked into a five-star hotel in Damascus on Sunday, marking the beginning of their stay in war-torn Syria. President Bashar al-Assad's government reached an agreement with the United Nations earlier in the week to allow the mission to move forward after months of opposition.

Prior to the team's arrival, the UN released a statement reiterating its role in the probe.

"Our goal remains a fully independent and impartial inquiry," the statement said.

"The secretary-general believes that an effective mechanism to investigate allegations of the use of chemical weapons can serve as an important deterrent against their employment," it added.

Chemical weapons expert Ake Sellstrom will lead the team in its investigation of three sites in Syria where chemical agents were allegedly deployed.

America's top military officer has laid out the options for a US military intervention in Syria, with the financial costs. The general has warned that the US should be wary of what happens after military action. (24.07.2013)

The 20-member team is scheduled to travel to the northern town of Khan al-Assal, which lies just west of Syria's second city, Aleppo. The Syrian government and opposition groups have accused each other carrying out a chemical weapons attack there, which killed 30 people on March 19. The town has since fallen under opposition control.

The UN has refrained from disclosing the two other sites slated for inspection.

Although mandated with assessing the validity of the allegations, the team will not determine which side deployed illegal arms. However, the UN said "the use of chemical weapons by any side under any circumstance would constitute an outrageous crime."

Calls for investigations began earlier this year. The Syrian government had requested the UN investigate only the incident at Khan al-Assal in March, but the UN - spurred on by allegations from Britian, France and the United States that both sides have used CWs - pressed for broader access, stalling negotiations.

The UN team has agreed to conclude their assessment within two weeks.